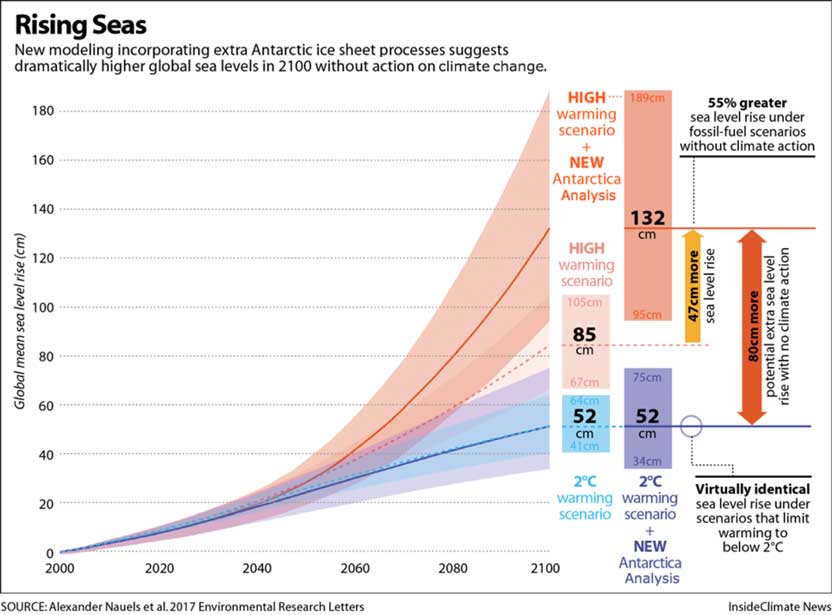 There is a new study that highlights what needs to happen if we are going to avoid a dramatic rise in sea level by 2100. The worst case scenario that we are now looking at is a rise of about four feet.

It is entitled “Linking sea level rise and socioeconomic indicators under the Shared Socioeconomic Pathways” and is available as an open access paper. The conclusion they reach is that …

We know that sea level is rising, this is already well-documented.

There is also a rather obvious source for a rapid increase in sea level rise. The West Antarctic Ice Sheet is already showing signs of rapid decline, and so what the paper is laying out are the consequences of the worst case scenario. One of the authors of the paper explains it as follows …

What we are increasingly seeing is that we have been on the conservative side in estimating sea level rise. Parts of the West Antarctic Ice Sheet appear to already be in substantial decline. If that continues, it’s not a matter of how much, but how fast sea level will rise. – Carl-Friedrich

To be clear, this is not a prediction, but rather is the real-world projection of how things will unfold if we do not rapidly reduce our CO2 emissions.

What have we learned since 2014 that adds to this understanding?

Key to the new projections is a March 2016 study in the journal Nature suggesting that even the large ice sheets of Antarctica could be susceptible to large-scale collapse at a warming threshold of about 2 degrees Celsius.

At that point, giant ice cliffs at the ocean’s edge could start to crumble from above and below. From the surface, meltwater will pour down into deep cracks and pry the ice apart; from below, tongues of warmer ocean water will free the floating shelves from rocky anchors, speeding the flow of the ice sheets into the sea.

Data from University of Massachusetts-Amherst climate scientist Rob DeConto, lead author of the 2016 Nature study, shows that the Antarctic ice sheets and glaciers get more sensitive to higher levels of warming, Schleussner said. “Antarctica is the main driver of the risk of really high sea level rise, so we really need to understand what’s happening there.”

The West Antarctic Ice Sheet and the Thwaites Glacier appear especially vulnerable to the 1.9 degree Celsius tipping point, said Ted Scambos, a polar ice expert with the National Snow and Ice Data Center. The Thwaites Glacier has accelerated. Other glaciers in the area are getting thinner, and their floating extensions, the ice shelves, are thawing from beneath and losing hold of their fixed anchor points.

“It looks like it (Thwaites Glacier) could express this kind of rapid retreat in the coming few centuries. The physics are certainly plausible,” said Scambos, who was not involved in the new study. Other scientists have found deep gouges on the Antarctic sea floor caused by icebergs during ancient times of temperature change, signs that are consistent with the theory of rapid ice shelf disintegration, he said.

When you consider this new understanding, what is rather interesting is what happens if we restrict global temperatures to under 2 C  and what happens if we don’t. The study uses the following diagram to illustrate this as follows: 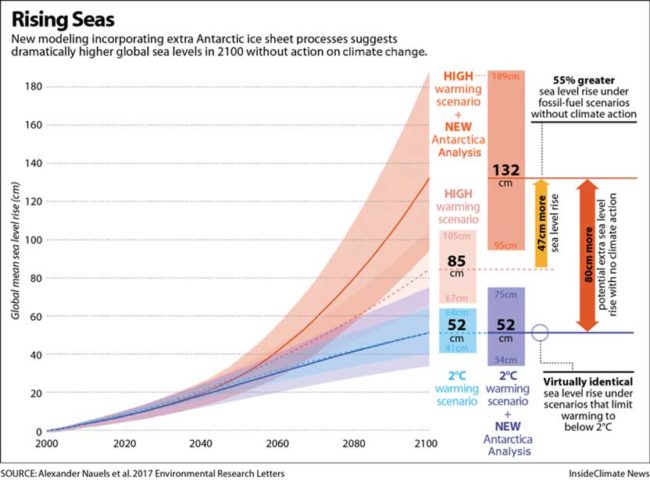 Notice how the increase between the old and new projections does not change all that much if we keep global temperatures under 2 C, but are greatly increased if we don’t.

We are rapidly approaching a tipping point. If we manage to take meaningful steps to reduce our CO2 emissions then we are looking at a sea level rise of roughly 52 cm. If we don’t, then the unthinkable becomes reality by 2100.

Ice shelf melting is the key to grasping the consequences of not taking decisive action in time.

“if you look at planned coal capacity, especially in the developing countries of South Asia, we are not getting anywhere close to where we need to be to meet the targets of the Paris agreement, The value of the study is linking up ambition on climate action, showing how specific actions will affect things like sea level rise.” – Carl-Friedrich Schleussner, study co-author

One last rather obvious note. The year 2100 is not going to see a sudden stop to sea level rise, it will continue to rise.