Well hey, its Halloween, so let’s go for a Satanic Temple themed posting. In reality, this is a posting about religiously inspired discrimination.

You might perhaps be tempted to think that an article dated 31st Oct about a Satan themed cake is simply a Halloween spoof. It is perhaps true that my timing is a deliberate choice to align with the date, but the incident itself is quite real.

The backstory here concerns Christian Baker Jack Phillips who is the owner of Masterpiece Cakeshop in Lakewood, Colorado. He made himself rather famous back in 2012 when he refused to make a cake celebrating same-sex union.  David Mullins and Charlie Craig, got a marriage license in Massachusetts and asked Phillips to design and bake a cake for their reception back home in Colorado. Mr Phillips refused hence a legal complaint was filed. Judge Robert N. Spencer ruled against Masterpiece Cakeshop on Dec. 6, 2013, concluding that Phillips discriminated against the couple “because of their sexual orientation.”. That was appealed by Mr Phillips with support from Alliance Defending Freedom, and so the case has been wending its way through the legal system and is now scheduled to go to the supreme court soon.

To be date specific, Oral arguments in the Supreme Court case, Masterpiece Cakeshop v. Colorado Civil Rights Commission, are scheduled to take place Dec. 5, with a decision expected next year.

The case attracted the attention of the Satanic Temple and so on 30th September, Mr Pillips received the following request … 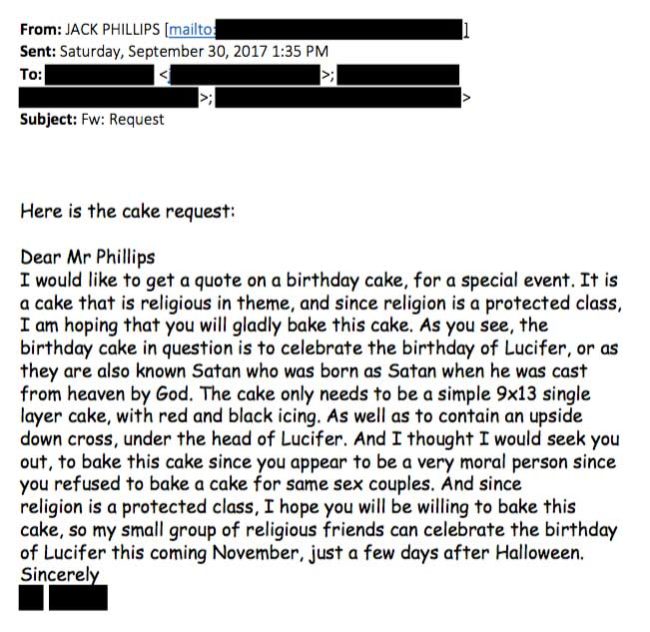 The key point being made here is that we are apparently in the rather weird position where you are not legally permitted to discriminate against people because of what they believe. That is rather clear, but when it comes to using your belief to justify discriminating against the LGBTQ community then this, for some, is apparently just fine.

The Satanic Temple is illustrating this point with the #SatanCakes campaign.

Did you know: bakers can't refuse service to The Satanic Temple because religion is a "protected class"? #SatanCakes pic.twitter.com/9VrVndkbSi

Not sure about this?

OK, so perhaps you are struggling a bit here and you are not too comfortable with the idea that people could be forced to do something that conflicts with their deeply held religious beliefs.

To help you out, permit me to alter things a bit. Imagine if you will, that the bakery had refused to bake a cake because the customers was Irish, Black, Asian, Evangelical, or Catholic. When challenged, their defence is that it goes against their deeply held religious belief.

Would you find that acceptable?

If you do, then where exactly do you draw the line of tolerance vs intolerance?

To put that rather bluntly; tolerance of intolerance is not actually tolerance at all, and that remains true even when it wears a religious mask.

If indeed you feel smoking is bad, or watching TV is evil, or … well you get the idea, then you are free to not do that. What you don’t get to do is to discriminate against people who do not believe the same things you do.

So what Exactly is the legal position when it comes to religion?

Mr Phillips is not the first religious person in history who found himself asked to perform tasks that conflicted with his specific religious beliefs, for example …

Actually the law is rather clear, Title VII of the federal Civil Rights Act directs employers to accommodate religious employees on the understanding that doing so does not cause any “undue hardship,” (translation: costs an excessive sum to sort out). So what this means is that normally people work things out by simply delegating – “I’m sorry Mr Smith, I’m afraid I’ll not be able to assist, but my colleague over here will be right over to help you“

The interesting twist here is that because Mr Phillips owns the bakery he is implementing his personal beliefs into a formal business policy and would thus require all his employees to adhere to that. He may in fact have no other employees, and might indeed be a sole trader, so where do things then stand?

Well, that’s why this case is going to the supreme count in about a month.

Is the Satanic Temple real?

Least you wonder, the Satanic Temple is not actually a religious group at all. They do not actually believe that Satan is real, nor do they actually worship Satan. In reality they are a political activist group that utilises religion to promote social justice, equality, and secularism.

“The laws of the United States require that no one may discriminate by way of refusal of service against an evangelical theocrat for their religious beliefs, but the evangelical theocrat may discriminate against LGBTQ people because of who they are. Because religion is a protected class, a baker may refuse service to LGBTQ people, but they may not refuse service based upon someone’s religion.”

Since it is Halloween I do feel obliged to point out that there is something truly scary here. No, it is not the reference to Satan, nor is it the concept of a Satanic Cake, but instead it is something far more scary and threatens us all.

On the 5th Dec the case goes to a Supreme Court that has been stacked in favour of the right wing. The distinct possibility exists that evangelical discrimination just might be codified into law.