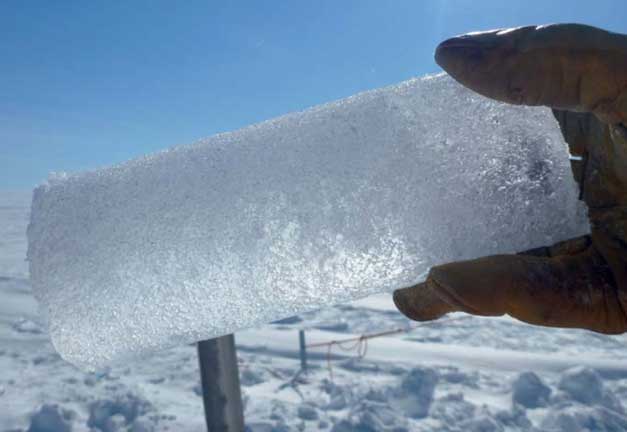 In a world where we clearly need to be reducing our CO2 emissions, the observation that CO2 levels are rising at an accelerated rate is not exactly good news, but unfortunately that is exactly what the latest WMO Greenhouse Gas Bulletin tells us.

On 30th October, the World Meteorological Organisation issued a press release “Greenhouse gas concentrations surge to new record“. Within it they highlight this rather dire bit of news from the latest annual Greenhouse Gas Bulletin …

Concentrations of carbon dioxide in the atmosphere surged at a record-breaking speed in 2016 to the highest level in 800 000 years, according to the World Meteorological Organization’s Greenhouse Gas Bulletin. The abrupt changes in the atmosphere witnessed in the past 70 years are without precedent.

Globally averaged concentrations of CO2 reached 403.3 parts per million in 2016, up from 400.00 ppm in 2015 because of a combination of human activities and a strong El Niño event. Concentrations of CO2 are now 145% of pre-industrial (before 1750) levels, according to the Greenhouse Gas Bulletin.

Rapidly increasing atmospheric levels of CO2 and other greenhouse gases have the potential to initiate unprecedented changes in climate systems, leading to “severe ecological and economic disruptions,” said the report.

So what is this Bulletin and just how much credibility does it have?

The annual bulletin is based on observations from the WMO Global Atmosphere Watch Programme. These observations help to track the changing levels of greenhouse gases and serve as an early warning system for changes in these key atmospheric drivers of climate change.

You can find a PDF for this latest Bulletin here.

It is well-established within the public consciousness that the levels of the various greenhouse gases have been rising since the start of industrialisation in the 1750’s and that this has led to global warming. It is also perhaps well understood that there will be some rather dire consequences if we don’t address this – rising sea level, more intense weather patterns such as life threatening heat waves and more intense storms. What is perhaps not so well appreciated is that since 1990, there has been a 40% increase in total radiative forcing – the warming effect on our climate – by all long-lived greenhouse gases, and a 2.5% increase from 2015 to 2016 alone, according to figures from the US National Oceanic and Atmospheric Administration quoted in the bulletin.

“Without rapid cuts in CO2 and other greenhouse gas emissions, we will be heading for dangerous temperature increases by the end of this century, well above the target set by the Paris climate change agreement, Future generations will inherit a much more inhospitable planet, “

“CO2 remains in the atmosphere for hundreds of years and in the oceans for even longer. The laws of physics mean that we face a much hotter, more extreme climate in the future. There is currently no magic wand to remove this CO2 from the atmosphere,”

But CO2 has been higher in the past … right?

True indeed, but there are a couple of key points to consider.

The last time the Earth experienced a comparable concentration of CO2 was 3-5 million years ago. That resulted in a global temperature that was 2-3°C warmer than now and sea level was also 10-20 meters higher than now.

Clearly the climate system will quite naturally respond to the current Greenhouse gas levels by reverting to a similar state, and that is exactly what it is doing. It should also perhaps be remembered that right now the primary cause for these increased levels is us – we are doing this.

We are beyond opinions and speculation – The numbers don’t lie

The timing of the bulletin is not random, but instead has a very specific audience in mind. From 7-17 Nov the UN climate change negotiations take place in Bonn, Germany. They need to make good scientific evidence-based decisions, and so the goal of the bulletin is to provide robust input into that process.

“We are still emitting far too much and this needs to be reversed. The last few years have seen enormous uptake of renewable energy, but we must now redouble our efforts to ensure these new low-carbon technologies are able to thrive. We have many of the solutions already to address this challenge. What we need now is global political will and a new sense of urgency,“

The Emissions Gap Report – Posting on that tomorrow

There is also a separate Emissions Gap Report that is issued by UN Environment. That tracks the policy commitments made by countries to reduce greenhouse gas emissions and analyses how these policies will translate into emission reductions through 2030. I’ll lay out what that tells us in a separate posting tomorrow.

(Spoiler alert: we need to do a lot more).

CO2  is by far the most important anthropogenic long-lived greenhouse gas. Globally averaged concentrations for CO2 reached 403.3 parts per million in 2016, up from 400.00 ppm in 2015. This record annual increase of 3.3 ppm was partly due to the strong 2015/2016 El Niño, which triggered droughts in tropical regions and reduced the capacity of “sinks” like forests, vegetation and the oceans to absorb CO2.   Concentrations of CO2 are now 145% of pre-industrial (before 1750) levels.

The rate of increase of atmospheric CO2 over the past 70 years is nearly 100 times larger than that at the end of the last ice age. As far as direct and proxy observations can tell, such abrupt changes in the atmospheric levels of CO2have never before been seen. 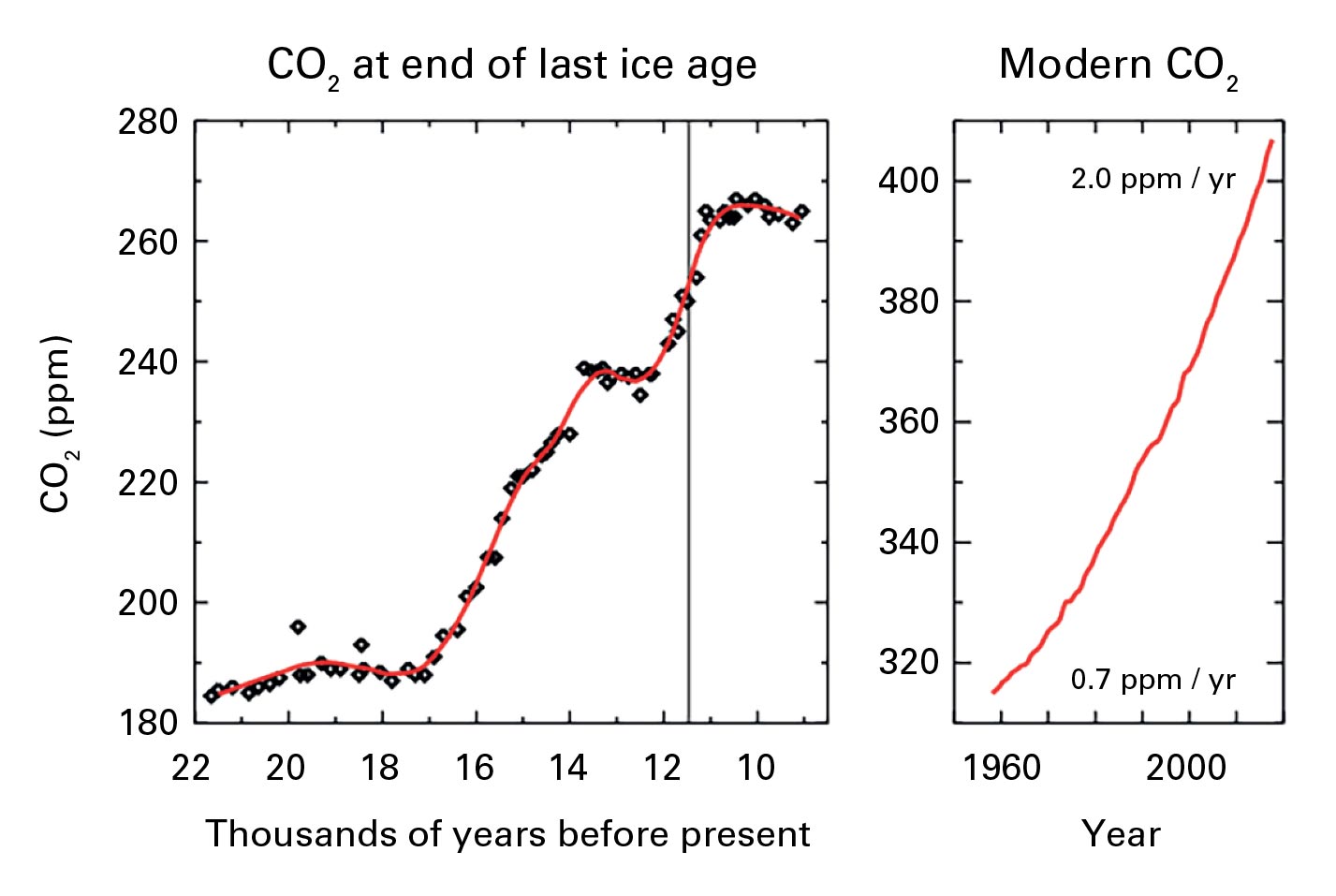 From the most-recent high-resolution reconstructions from ice cores, it is possible to observe that changes in CO2have never been as fast as in the past 150 years. The natural ice-age changes in CO2 have always preceded corresponding temperature changes. Geological records show that the current levels of CO2 correspond to an “equilibrium” climate last observed in the mid-Pliocene (3–5 million years ago), a climate that was 2–3 °C warmer, where the Greenland and West Antarctic ice sheets melted and even some of the East Antarctic ice was lost, leading to sea levels that were 10–20 m higher than those today.

Methane (CH4) is the second most important long-lived greenhouse gas and contributes about 17% of radiative forcing. Approximately 40% of methane is emitted into the atmosphere by natural sources (e.g., wetlands and termites), and about 60% comes from human activities like cattle breeding, rice agriculture, fossil fuel exploitation, landfills and biomass burning.

Atmospheric methane reached a new high of about 1 853 parts per billion (ppb) in 2016 and is now 257% of the pre-industrial level.

Nitrous oxide (N2O) is emitted into the atmosphere from both natural (about 60%) and anthropogenic sources (approximately 40%), including oceans, soil, biomass burning, fertilizer use, and various industrial processes.

Its atmospheric concentration in 2016 was 328.9 parts per billion. This is 122% of pre-industrial levels. It also plays an important role in the destruction of the stratospheric ozone layer which protects us from the harmful ultraviolet rays of the sun. It accounts for about 6% of radiative forcing by long-lived greenhouse gases. 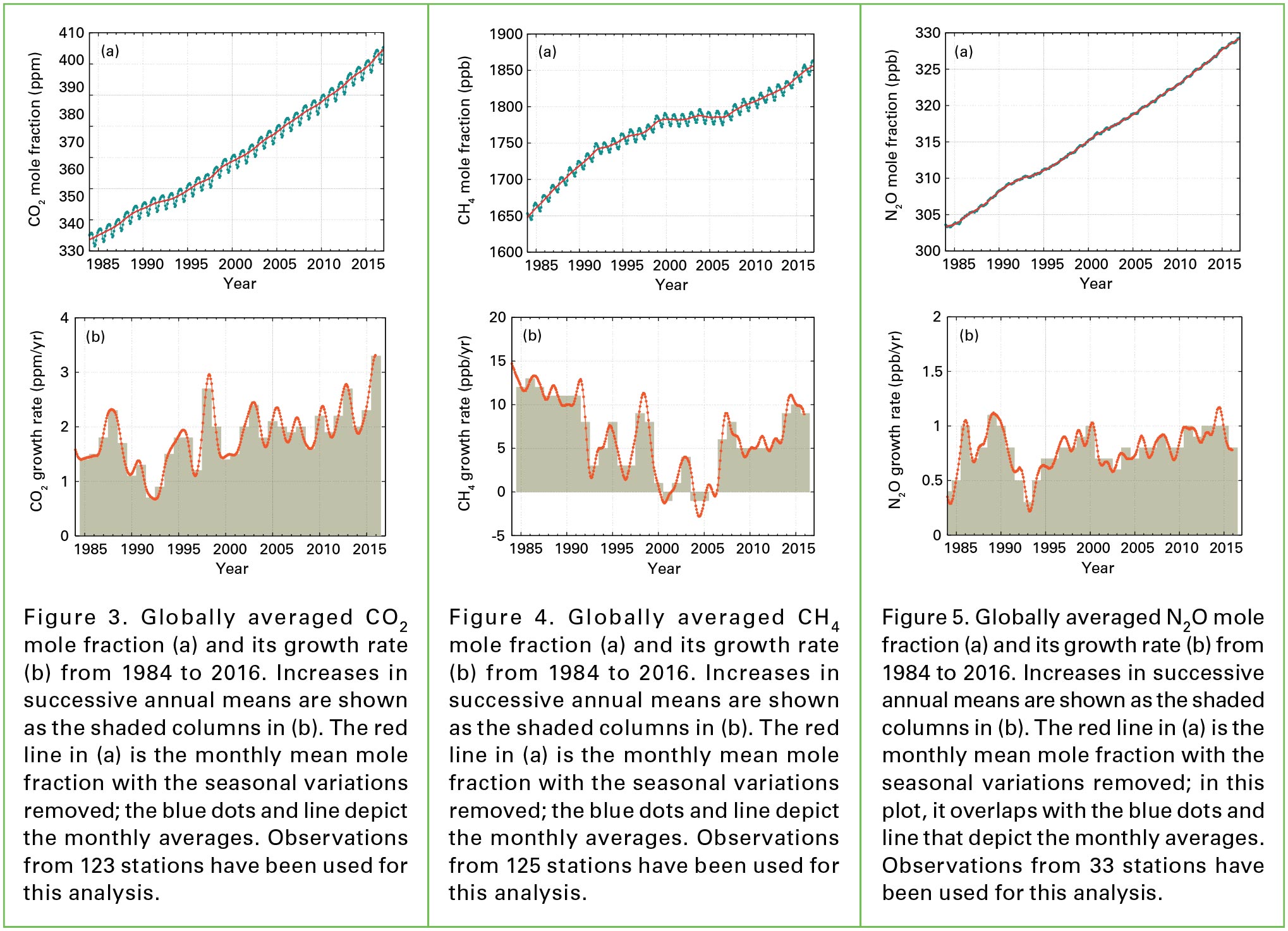