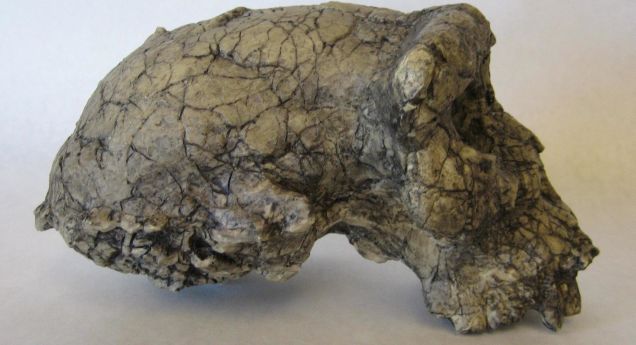 There is no fuzzy line here, nor is there some middle ground where a meeting of minds can potentially gel, and while they are indeed truly sincere, they are also wrong.

The palaeontologist Adam Benton was rather curious about how creationists explain such evidence and so he conducted a study that examines this question. The results are now published in Vol 34, No 4 (2014) of the National Center for Science Education, and is available as a PDF here.

“there are no transitional forms.” This is a criticism frequently leveled at human evolution, with many creationists noting the paucity of fossil evidence for our species’ development. Institute for Creation Research founder Henry M Morris, for example, claimed, “all known fossils of ancient humans would fit on a billiard table”

We have found tens of thousands of hominin fossils (remains more closely related to modern humans than chimpanzees), representing over 6000 individuals (Smithsonian 2014), dozens of which are just as scientifically important as Lucy (AL 288-1). The hominin fossil record is far from complete, but there is nevertheless an overwhelming body of evidence in favor of human evolution.

So what is going on here, why are they making such obviously false claims? To explain this Mr Benton formed the hypotheses and then did the study written up in the NCSE paper to test it …

I hypothesize that the large young-earth creationist ministries, such as Answers in Genesis (who hosted the debate between Ken Ham and Bill Nye) are not providing accurate representations of the human fossil record. If they focused on a select few examples, such as the Lucy specimen, and minimized or omitted references to others, this would create the false impression that the number of hominin fossils is much smaller than it actually is. Thus, if people relied upon these organizations as their primary source of information on human evolution, they would wind up with a distorted view that might lead them to ask “Why is there only one Lucy?” This paper tests this hypothesis.

He then proceeds to examine their on-line presence, and describes in his paper his methodology. The results were as follows:

Clearly Lucy is extraordinarily popular (perhaps because they can’t spell the other names).

the same methodology was applied to Piltdown man, a 102- year–old hominin hoax, a striking pattern emerged. The ICR has 9 pages, AiG has 65, and CMI has an amazing 79 English-language pages that refer to Piltdown man. So, although it is a hoax and therefore has no impact on modern paleoanthropological thinking (save as a cautionary tale), references to the irrelevant Piltdown man outweigh references to each of the legitimate fossils except Lucy on all of these sites. Creation Ministries International even makes more references to this irrelevant hoax than to Lucy.

Now that is truly shocking.

His conclusion is the rather obvious one …

people who rely on AiG, CMI, and/ or the ICR for information on human evolution will wind up woefully underestimating the hominin fossil record

It may of course be tempting to conclude that there is simply an information gap here and that it can be resolved by filling that gap with accurate reliable information or perhaps better education. However, if you then proceed to present the facts to a creationist you will rather quickly discover that this is simply not the case; eyes will rapidly glaze over, and that whooshing sound that you can distinctly hear is the information rushing right over them without making any difference at all.

The core problem is that people start with a conclusion that they have invested in very heavily both emotionally and culturally, and so one of the consequences of such an investment for some is young-earth creationism – in other words, it is all a symptom of the real problem – that emotional investment – and so a lack of information, or wrong information, is not the root cause at all.

It is not Stupidity

This is not about human intelligence, the smarter you are, the easier it is to dream up ways of rationalising utterly absurd ideas.

Tackling the core issue and making a difference

Discussing the details of evolution will be a pointless exercise because it is just a symptom.

Instead you need to bypass that and go directly to the root cause and deal with that – namely the investment in the idea that they have a relationship with a supernatural entity that does not actually exist at all.

You can’t just tell them, people need to be able to be able to work these things out for themselves, and so you can effectively nurture critical thinking by asking friendly questions that will enable them to start pondering over issues that they might not have previously considered.

1 thought on “How do believers cope with evidence that conflicts with the belief?”