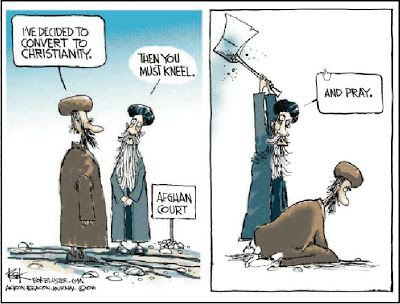 Kashif N. Chaudhry, a member of the fringe Ahmadiyya sect, writes in the Huffington Post to defend the idea that the Quran does not specifically endorse the idea of putting people to death for Apostasy. He makes a reasonable argument for this stance, and the fact that this is a non-violent stance is of course something that should be both nurtured and also applauded.

So what is this “Death for Apostasy” idea really all about?

Apostasy is defined as “the abandonment or renunciation of a religious or political belief or principle”. In other words, people who decide that various ideas have no merit or justification are deemed to be guilty of treason by those that still embrace such ideas.

The traditional Islamic view is that apostasy should be punishable by death or imprisonment until repentance, and rather sadly a significant number of Islamic scholars still hold this view today. To confirm this, we need look no further than the case of the Sudanese woman, Meriam Irrahim, who was sentenced to death and forced to give birth in jail with her legs in chains to see that this truly repugnant idea is still firmly rooted within many minds.

So does the Quran endorse this idea?

Actually, despite what Mr Chaudhry claims, rather sadly it does.

They long that ye should disbelieve even as they disbelieve, that ye may be upon a level (with them). So choose not friends from them till they forsake their homes in the way of Allah; if they turn back (to enmity) then take them and kill them wherever ye find them, and choose no friend nor helper from among them,

The words there are rather obvious and direct, so how does Mr Chaudhra argue against that? He claims that it, “speaks of hypocrites – not apostates – who were keen on fighting the State of Medina.“, and he does have a point, but the rather embarrassing fact is that 4:89 is often quoted in Sharia courts as justification for the execution of an Apostate.

It’s not the only reference of course, there are others both inside the Quran and also outside, for example the rather extensive Hadith collections that give explicit guidance on murdering non-believers …

“2171. Narrated ‘Abdullah: The Prophet said, “The blood of a Muslim, who confesses that Lâ ilâha ill-Allâh (there is no god but Allâh), cannot be shed except in three cases: 1. Life for life (in cases of intentional murders without right i.e., in Al-Qis̩âs̩ – Law of Equality in punishment); 2. A married person who commits illegal sexual intercourse; and 3. The one who turns renegade from Islâm (apostate) and leaves the group of Muslims. [9:17-O.B]” — Sahih al-Bukhari, 9:83:17

So in essence what we have here is a pattern of argument and counter-argument that repeats as you cite a verse, and then Mr Chaudhra counters with some reason why it does not really mean that and means something non-violent, or why it can be discarded.

So whose interpretation is right?

There is no “true” interpretation just as there is no “true Islam”. Each and every one of the vast diversity of Islamic sects will of course declare that their specific understanding is the right one and that all the others are wrong, and any such declaration will be quite a sincere one that is honestly believed.

It may indeed be tempting to argue with Mr Chaudhry that his understanding is not the right one because it is not the traditional one, but to be honest, the fact that he takes a completely non-violent stance and thus chooses to interpret the rather obviously violent verses as verses that are not violent and have not been understood correctly, is perhaps something to be encouraged and nurtured, not argued against.

If indeed I was to criticise the Ahmadiyya, then it would be far more appropriate to condemn the rampant Homophobia and Misogyney within their community and not their stance against all violence.

If indeed there is a conversation that should take place, then it should be between Mr Chaudhry, and those Islamic communities that do truly believe that violence is appropriate and justifiable, because if he could perhaps convince them that non-violence is the right interpretation, then that would truly be progress towards a better world.

The Quran is just a man made book and not the words of a god, and so if some are indeed committed to the idea of truly viewing them as divine words, then I’d be far happier if they read such words using glasses coated with a non-violent tint, but then the ideal end-game would of course be an appropriate degree of skeptical thinking being applied to all such supernatural thinking that leads to the recognition that these religious texts contain some really bad ideas that should be robustly rejected.