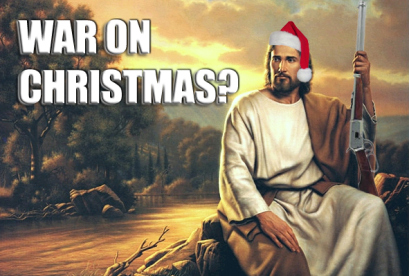 A war on what?

The first observation to make is that the celebration of Christmas as we now experience it is very much an invention of the victorian era, and historically it was Easter that had far more significance to Christians. Much may in fact has been prompted by Charles Dickens writing A Christmas Carol in which he constructs Christmas as a family-centered festival of generosity. To quote from the Wikipedia page on that story …

Dickens’ Carol was one of the greatest influences in rejuvenating the old Christmas traditions of England, but, while it brings to the reader images of light, joy, warmth and life, it also brings strong and unforgettable images of darkness, despair, coldness, sadness, and death

So where did the “War on Christmas” claims come from?

Time did a brief history of it all back in 2008, and as you might anticipate, the article has a picture of Bill O’Reilly.

One rather interesting point they make there is that there once was indeed a war to completely suppress Christmas, but that was not conducted by non-believers, but rather by the Puritans who were very much believers. Their primary objection was that Christmas was not in any way Christian at all (which is factually correct), and so back in 1659 the founders of the Massachusetts Bay Colony banned the holiday; it wasn’t reinstated until 1681.

Promoting the idea of a war is very profitable

The modern “War on Christmas” myth is very much down to Bill O”Reilly, Fox “News”, and other similar interest groups.

Bruce Maiman nails it quite nicely …

Truth be told, the “war on Christmas” is actually good business. Groups such as the Mississippi-based American Family Association, and legal groups such as the Alliance Defense Fund and the Liberty Counsel, annually sell buttons, bumper stickers, trinkets and trifles to Christian enthusiasts. The Liberty Counsel’s “Help Save Christmas Action Pack,” costing barely pennies to make, sells for $25 – a suggested donation, no doubt.

Fox News’ crusade against infidels began in earnest in 2005 with the sale of then-network anchor John Gibson’s “The War on Christmas.” The very October day Gibson’s drivel hit bookstores nationwide, Fox News aired the first of five dozen segments about this evil plot, complete with lavish plugs for the book or for the Christmas baubles peddled by Bill O’Reilly on his website.

When the idea is one that they disagree with, for example Atheists putting up billboards that point out that Atheists are simply normal people leading normal lives, there is outrage and a demand that such “garbage” should be censored. Here for example is Pat Robertson suggesting to his millions of viewers that …

…we should “forget this first amendment stuff”. A billboard with an atheist message is “repugnant” … “tell those atheists to take a hike” because “it’s a mistake to put that kind of garbage in public view”.

Er yes, apparently the first amendment only applies if you have the right belief.

In contrast, an attempt to pressure Sony to withdraw a movie is met with almost universal outrage.

It is also rather odd to deem atheist billboards to be a “war”, and yet the religious not only do exactly the same, but also promote stuff that contains text that is quite frankly best described as “intolerance incarnate”, for example “Anti-God is Anti-American, Anti-American is Treason, Traitors lead to a Civil War.” – here is a list (some of which are so absurd you can only laugh at it).

Is the war really over

Bill O’Reilly thinks it is and now claims that he personally won it, but then this is Fox News, and remember his “war” was simply a scam that he was using to line his pockets.

So let’s keep this simple – No there never was a “war” on Christmas.

How do Atheists cope with Christmas?

The one and only common factor amongst Atheists is that they agree that there is no god, but beyond that there need not be any consensus at all on anything else, and that is fine. Some, very few, are very hostile to the entire concept and make a point of treating Christmas day like any other day, for example Tom Flynn, and if that is what floats his boat then best of luck to him with that (and I’m not being sarcastic). Others, such as myself, are quite happy to join in and have a bit of fun, so I can happily put up a tree decorated with lights and other trimmings and buy gifts.

So Happy [Holidays / Christmas / Saturnalia / Solstice / Hanukkah] – (You can pick whichever you prefer or none at all).