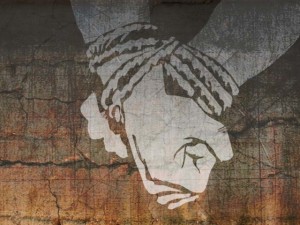 Blasphemy laws are meaningless bits of legal nonsense that do nothing except empower a specific religious faction to oppress and stifle almost anything that they decide they are offended about, and that “offence” is never actually defined but is usually sufficiently vague enough to be applied to whatever a random cleric thinks it needs to be applied to.

It is serious stuff, people lose their heads over this … quite literally.

Technically, every single religious belief, from the viewpoint of every other belief is blasphemy, so in theory everybody is guilty, and there are no exceptions. For example …

This is all a page right out of Monty Python and leads you to wonder if those that prompt Blasphemy laws are ever themselves accused by the same laws.

Religious cleric Junaid Jamshed in Pakistan has been accused of blasphemy recently and has now fled to London, rightly fearing for his life in Pakistan (Side note … he has the resources to run away, but many of those he has accused have not been so lucky).

The story here is that he re-enacted a hadith which says that Muhammad’s youngest wife Ayesha occasionally faked being ill to seek her husband’s attention. The re-enactment was entitled ‘even the prophet’s company cannot tame a woman’.

“If you want a happy life, do not teach your wives how to drive a car. Do not let her go outside. She might leave you.”

“A husband only involves himself in an extra marital affair because his wife isn’t doing enough. She is to be blamed.”

Least you have any doubts that this cleric is a complete and utter turd, he has generally endorsed the idea that not only should women not drive, and should (Saudi style) completely cover up, but has promoted the thought that women are simply the possessions of men and have no real rights at all, so I find it quite satisfying that it is this absurd philosophy that has now led him into the blasphemy quagmire.

The same scholars who dubbed blasphemy an ‘unpardonable sin’ when minorities were burnt alive or sentenced to death are now seeking forgiveness for their man.

The entire episode, however, is not just about an individual’s misogynistic endeavours or the collective hypocrisy of the Pakistani clergy. If anything, the hypocrisy can be cashed in on by the state to finally modify the stringent blasphemy law in the country, which has been blatantly used to suppress religious minorities.

Pakistan’s blasphemy law is a virtual death sentence for minorities, with an allegation enough to sanction murder, or at the very least make it impossible for the accused to remain in the country.

Jamshed’s case holds pertinent lessons for those who endorse religious law in the 21st century.

Jamshed, who is on record as saying that ‘secularism is a curse’, is now taking refuge in a society that has secular laws, vying to dodge the ramifications of the jurisprudence that he has endorsed for 17 years.

Despite Britain’s increasing number of Sharia courts – 85 at time of writing – which are limited to financial and familial matters, Jamshed knows he is perfectly safe in Britain, a country that epitomises everything that’s ‘wrong’ with the ‘evil West’.

He was wise enough to not go into exile in Saudi Arabia, the country that is the epitome of Jamshed’s version of Islam, which is intolerant, fundamentalist and extremist.

The Saudi legal system is based on Sharia law and does not have a penal code. Therefore, in Saudi Arabia, where Jamshed’s endorsed law prevails, the punishment for his comments about Ayesha would be left at the mercy of a judge’s interpretation of the Sharia law, which more often than not leads to decapitated heads.

So will he learn from this that his specific Islamic intolerance is immoral now that it no longer tolerates him?

Nope, it will soon be brushed over and forgotten about. The grip that the irrational belief has is quite strong and he is too deeply invested in it to be capable of letting go and becoming a rational tolerant decent human.

Jamshed issuing a tear-filled apology, begging for forgiveness and so now this apology has largely been accepted by the religious community in Pakistan; observers doubt the case will be pursued with any real zeal going forward.

“The fact that he has been forgiven itself shows the hypocrisy of the proponents of this law. They are not in a forgiving mood when it comes to the weak and marginalized who are often accused falsely,” – Yasser Latif Hamdani, a Pakistan-based lawyer

So there you go then, have the right length of beard and Blasphemy is not such a problem.

There is a choice

You can either support the concept of islamic sharia or you can support basic human rights and tolerance for all, but what you cannot do is support both because they are mutually exclusive concepts.

No, many are not and reject such abhorrent rhetoric, he is a relic that belongs in the 7th century and not the 21st.

What is of course truly paradoxical here is that the concept of a secular state, a place of safety for all and a place that embodies everything that he stands against, is now the only place of safety he has left to flee to, and dare not return despite being forgiven.

And so a really good example of why secularism is indeed the very best solution that humans have turns out to be an Islamic Cleric who is himself ferociously opposed to the very idea. (Damn, I just blew up my irony meter)