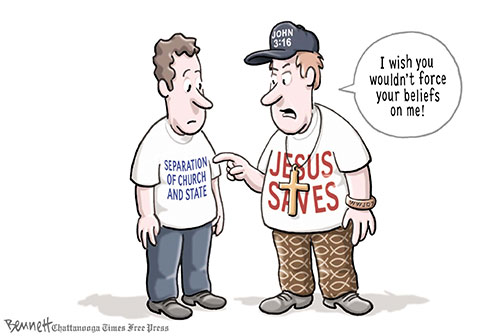 If an employer discriminates against a religious person on the sole basis of their specific beliefs, there there are consequences because there are quite rightly laws in the US to protect the basic human right to believe whatever you wish. The US Equal Employment Opportunity Commission spells it all out in detail …

Religious discrimination involves treating a person (an applicant or employee) unfavorably because of his or her religious beliefs. The law protects not only people who belong to traditional, organized religions, such as Buddhism, Christianity, Hinduism, Islam, and Judaism, but also others who have sincerely held religious, ethical or moral beliefs.

Religious discrimination can also involve treating someone differently because that person is married to (or associated with) an individual of a particular religion or because of his or her connection with a religious organization or group.

The law forbids discrimination when it comes to any aspect of employment, including hiring, firing, pay, job assignments, promotions, layoff, training, fringe benefits, and any other term or condition of employment.

It is illegal to harass a person because of his or her religion.

OK, that all appears to be quite clear, however it does perhaps open up the question of what should happen if somebody holds a belief that prevents them performing a specific duty at work. Now we do need to come to terms here with the really that there are some really odd beliefs. Well, we have seen this of course with Kim Davis, the Kentucky county clark who refused to issue a marriage certificate for gay people despite it being wholly legal to do so and so she was in effect imposing her specific beliefs as state policy when acting for the state as a state employee.

She is not the first religious person in history who found herself in a job that required her to perform tasks that conflicted with her specific religious beliefs, for example …

Actually the law is rather clear, Title VII of the federal Civil Rights Act directs employers to accommodate religious employees on the understanding that doing so does not cause any “undue hardship,” (translation: costs an excessive sum to sort out). So what this means is that normally people work things out by simply delegating – “I’m sorry Mr Smith, I’m afraid I’ll not be able to assist, but my colleague over here will be right over to help you“, and so where Kim Davis got this very wrong is that she refused to step aside and permit any of her not so fanatically nutty colleagues to step in and issue the marriage certificate.

What about employment discrimination against non-believers?

Some assume no on the basis that the legislation that applies to religious discrimination does not apply to the non-religious, but that is not actually correct. To illustrate that here is a recent story about just this being tested …

Paul was a mechanic for Christian Heating and Air Conditioning in Pennsylvania. The company owner, a born-again Christian, gave employees identification badges with their name and photo on the front and the company’s mission statement on the back: “This company is not only a business, it is a ministry. It is set on standards that are higher than man’s own. Our goal is to run this company in a way most pleasing to the Lord.”

Paul taped over the mission statement on the back of his ID badge because he is an atheist. No one asked about his religious beliefs during his job interview, but he did discuss the issue later with co-workers. He explained that he had been an atheist since he was a teenager. When the owner sometimes urged Paul to go to church, Paul declined and said that he didn’t appreciate the pressure.

Then the owner saw the back of Paul’s ID badge and ordered him to remove the tape or lose his job. Paul refused and was fired.

He sued, arguing that his right to religious freedom had been violated and that taping over the badge back was a reasonable accommodation.

The employer argued that atheism isn’t a religion and therefore doesn’t have to be accommodated.

The court ruled otherwise. It said a sincerely held belief that there is no God fits the Title VII definition of religion and must be reasonably accommodated. Paul’s lawsuit can go to trial.

Employers don’t get to discriminate on the basis of either belief or non-belief, and that is not an opinion, that is the law. Breach that and the employer will face legal consequences.

Incidentally, if you are in the UK and not the US then you might be wondering what the law is. It is actually quite similar, employers are not permitted to discriminate on the basis of either religious belief or lack of it.