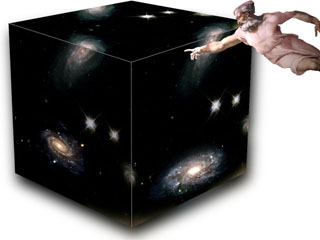 Adam Ericksen, the Education Director for The Raven Foundation a religious group that promotes non-violence, has recently blogged the rather common claim that God is not part of this universe. My intent here is not to specifically criticise Mr Ericksen nor the Raven Foundation, but to instead highlight it because it is simply one example of this rather common rebuttal to an expression of disbelief.

He starts off by writing  ….

Atheists will sometimes challenge us to prove that God exists. Sometimes they assert that the more we discover from science, the less room there is for God. So, with more science we will discover that fact that God doesn’t exist.

The problem is that we aren’t using the word “God” in the same way.

Oh wait, hold on there, this all has a few problems. If anybody wishes to establish any claim for anything as true, then you do need to provide evidence for it. Obviously that is how science works, but it is also how many other things such as the law works, you are innocent until proven guilty, you do not get declared guilty until proven innocent. We find a similar pattern right across many human endeavours – the safety of many products we use or the food we eat has been assumed to be OK by default and nobody bothers to verify it … right? Well no, it is of course the other way around. So anybody asserting a religious claim should be expected to articulate with evidence why it is a credible claim.

Science is not about disproving god, it never has been and so we are not using the word “god” incorrectly, those that express disbelief simply make the observation that the claim has no evidence.

OK, now that we have cleared that up let’s move on to the actual claim …

God doesn’t “exist” as a being within the universe. If we believed that God is a physical entity, then we’d be in trouble. But God isn’t like Zeus. God doesn’t hang out on Mt. Olympus with other gods.

Now hang on a moment – essentially the Christian Claim is that God intervenes and manifests within our universe and that is basically a testable measurable claim.

If indeed the claimed god does not interact with our universe in any way at all, then how exactly does Mr Ericksen, and the many others who make the same claim know this? We appear to have a knowledge claim that has no source within this universe, and if correct, and that is what is being claimed, then in what way exactly is this different than a fantasy?

You can’t be both vague and also specific

When faced with such cold hard facts the response is often a retreat to something that is not actually testable or verifiable, hence the common claim that God is not part of this universe then quite naturally pops up.

Humans embrace specific beliefs because those beliefs do give us something. They join us to a tribe that we can belong to. This not only reduces our feelings of isolation, but also grants us rituals to perform so that we gain an increased sense of control over things that are totally random and way beyond our ability to control. It also helps to pacify our deep seated fears and generally fills many humans lives with a sense of purpose and meaning.

None of that in any way validates the specifics of such beliefs, and while the precise ideas vary considerably, are very diverse, and are also constantly evolving and adapting to fit the emotional needs of each successive generation, it is not the details themselves that attracts humans (Jesus, Mohammed, Buddha, Krishna, etc…) but rather is it the emotions and involvement that draws us in and consumes us.

If you explain why the ideas are daft or absurd, nothing changes. However, if you can offer a better more rational means to meet the same emotional needs, then you can begin to potentially free humans from the embrace of things that are simply not true at all. You might perhaps be tempted to argue that such a path would not be foolish because as the historian Gibbon (not Roman named Seneca) once argued, it serves as a useful means of control …

The various modes of worship, which prevailed in the Roman world, were all considered by the people, as equally true; by the philosopher, as equally false; and by the magistrate, as equally useful.”

If indeed you are content to leave people wallowing in ignorance and superstition that is laced with many bad ideas, but generally pacifies the populace, then you might indeed be tempted to consider belief to be “useful”, but I would rather strive to believe as many true things as possible and to also leave the world a better place.

If there are no gods, then you will be gone, but…will have lived a noble life that will live on in the memories of your loved ones.”

– No not by Marcus Aurelius, and I have no idea who did write the above, but I still like the observation.

2 thoughts on “Claim: “God is outside our universe, hence is beyond science””