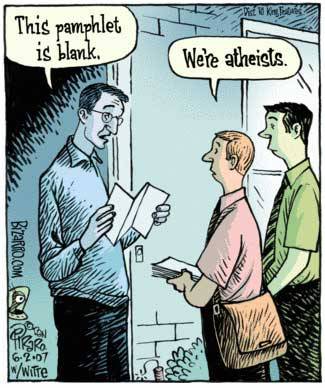 In the past during my religious phase I once belonged to a group that decided to do some outreach, and so this attempt to grow the community basically consisted of going door-to-door and inviting people along. It was I confess an interesting experience, because I got to see ways in which different people responded when encountering religion, and also to learn that as a means of outreach, it does nothing except to perhaps fool those who do it into thinking they are doing something – number of new members we saw – zero – but nobody mentioned that. Most of the people who opened their doors were of course polite but disinterested, some attempted to engage in conversation, and a couple were quite aggressive. Those days are long past and I have since then left it all far behind and do also regret being silly enough to get caught up in it all, but it does perhaps give me a small insight into what is going on inside the heads of people who come knocking on my door these days.

So how should you respond when the religious come calling?

It can only ever be a personal decision of course and it very much depends upon what you would like to see happen as a result of the encounter, but inevitably it will often be driven by the timing of it all, and even if you are willing to have a go at talking them off the ledge, you might be too pressed with other things to do so, and so my own personal response falls into one of the following camps …

A meaningful intervention never ever starts with, “Well, I don’t believe any of that Bullshit and so you must be a completely clueless jerk to buy into this”.  In other words, show a bit a empathy and be polite.

You should also perhaps bypass all the attempts to engage you at the level that involves discussing symptoms … people are not generally religious because they are homophobic, or creationists, or … well you get the idea. It is actually the other way around, they tend to be homophobic, or creationist, etc… because they are religious, so if you deal with the core of the problem then the rest will naturally sort itself out.

You can’t tell them anything, and so the best means to awaken the sleepers is to deploy socratic questioning. You also need to understand that this is really not about exchanging information. People are not religious because they lack some vital bit of information or have not understood something correctly, so laying out facts will have exactly zero impact. Religion is basically an emotional relationship and not an embrace of specific ideas, and so you need to get them to a place where they can truly understand why they are religious and what specific emotional need it meets for them. In other words, it has nothing to do with the specific ideas that the variation of belief they embrace promotes.

Don’t talk at them, but engage with them at a meaningful level, one where insights are gained about what is really going on, such that people are then positioned to start to think about it all from a new viewpoint.

The philosopher and educator Peter Boghossian has a great book entitled “A Manual for Creating Atheists“, so if the topic of effective communication with religious people is of specific interest, then this might be for you.

OK, this last bit is simply amusing and is here, not to drive any specific point home, but rather to illustrate in quite a funny way the degree of culture shock that the religious can suffer when door knocking in the 21st century. Nick King was blogging a few days about about what happened when two Jehovah’s Witnesses knocked on his door and his 5 year old answered …

The knock came at an unfortunate moment. I was home alone with our five year old daughter and just out of the shower.

Our daughter got to the door first. Dressed in her ubiquitous Saturday morning attire of flowing Disney Princess Dress and sparkly party shoes.

A smartly dressed middle aged couple stood on the doorstep. Pamphlets in hand. Fixed smiles and determined, evangelical fervour in their eyes.

Leaning forward slightly, the man smiled sweetly at our daughter.

“Are your Mummy or Daddy at home?” he asked in a saccharine voice.

Our daughter is many things, foremost amongst which she is confident. And truthful.

“I have two Dads!” She answered with determination.

The male Jehovah’s Witness had clearly not expected this answer and blinked slightly, casting a sideways glance at his female colleague as if to confirm that he had not misheard our daughter’s response. A momentary awkward silence followed.

Our daughter decided to fill it.

“And I have Princess Panties!” She declared, lifting her voluminous Princess Dress to show the couple her new Cinderella themed underwear as confirmation.

By this point the couple on our doorstep were beginning to look unsettled. I felt I’d better intervene and made for the door.

“Ah!” The clearly relieved Jehovah’s Witness saw a way out of the awkward conversation with a five year old, “here’s your Daddy?” He proffered a leaflet proclaiming ‘God’s Word’ above a painting of a halo like sunrise.

Our daughter remained on the path of truthfulness. “One of them,” she said. “This one’s bald, the other one is a VERY busy and VERY important doctor!”

“She’s right,” I said. “Although my husband is out just now.”

Now both Jehovah’s Witnesses were blinking rapidly. Looking from me, to our daughter and then back to me again. “Dads?” The man said, his smile changing from confident to quizzical.

Our daughter took this to be a sign that the poor people on the doorstep were somehow confused and needed a clearer explanation. She decided to spell things out as if speaking to an imbecile. “I have TWO DADS” Then a flourish in my direction. “This is the BALD ONE”.

The rapidly blinking Jehovah’s Witnesses were now completely outside their comfort zone. “Ah, well, would you like a leaflet?” The gentleman said, his female companion already backing away.

I’m fairly sure the poor Jehovah’s Witnesses won’t be coming back any time soon.

1 thought on “What should you do when religious people come knocking on your door?”