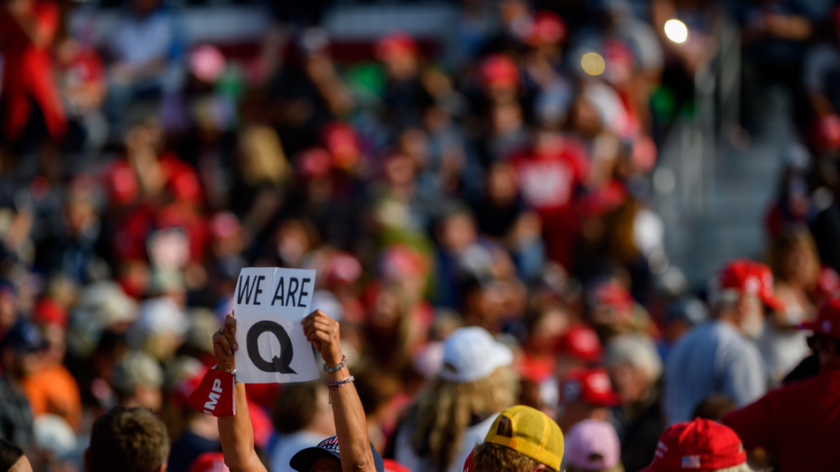 So I posted a QAnon update last week. Here is yet another, just one week later.

In the run up to the election this cult has become rather active and so merits some attention.

First a quick bit of background

Most of you do probably know this bit, and can skip it. For those that don’t, here is a quick primer to get you up to speed.

QAnon is basically a far-right conspiracy claim that there is a worldwide cabal of Satan-worshiping pedophiles who rule. Trump is regarded as a messiah, God’s chosen man, to scupper their plans.

Moving on, let’s see what has been happening in the past week within the QVerse

To place this article in context, the day before it was published, CNBC was reporting that … Facebook will ban any ads supporting QAnon and militarized social movements.

This Associated Press article is an interesting insight that points out that while both Twitter and Facebook are officially taking a stance against the QAnon BS, they are simply not succeeding. It is just words and lacks a great deal of substance …

the social media companies still aren’t enforcing even the limited restrictions they’ve recently put in place to stem the tide of dangerous QAnon material, a review by The Associated Press found. Both platforms have vowed to stop “suggesting” QAnon material to users, a powerful way of introducing QAnon to new people.

But neither has actually succeeded at that.

On Wednesday, hours after a chaotic debate between Trump and Democratic presidential nominee Joe Biden, a video from a QAnon account that falsely claimed Biden wore a wire to cheat during the event was trending on Twitter, for example.

Twitter is even still running ads against QAnon material, in effect profiting off the type of tweets that its vowed to limit. And in some cases Facebook is still automatically directing users to follow public and secret QAnon pages or groups, the AP found.

The AP articles follows up the above with more examples and a deeper look at it all.

A few days prior to the above being published Wired ran the following similar story on Sep 29th – As the election looms, QAnon is seeping into local Facebook groups. They start they by laying out this …

In the past few months, the tide of misinformation, hyper-partisanship, and conspiracy theories running rampant at a national level has trickled down to the small, local groups

What is fascinating about that is the reaction of people to the cracking down on conspiracy nonsense. They report this opinion bubbling up …

“The censorship in this country is getting out of hand – if you are a conservative they do everything they can to shut you up. It is starting to remind me of communist China to be honest. They call it fact-checking, but often it is just a liberal opinion check.”

It does all matter because elections can be won and lost within these small FB groups.

The window of opportunity for simply trusting the social media companies to do what is right is fast closing. To truly tackle the issue legislators should accelerate plans for holding those companies and their executives accountable for the harm done because they have given priority to profit – I was writing about this not too long ago and explained why they are being inept when faced with calls to address the challenge.

The Conversation – Sep 25 : How QAnon conspiracy theory memes are spreading on Facebook in the UK

This is a bit of a surprise for some. You might think that QAnon is a very specific US centric conspiracy belief since much of it revolves around Trump. Apparently not. It is spreading and taking root elsewhere. Here Sue Greenwood of York St John University writes about how via Facebook it is finding gullible victims in the UK.

Through the 2015, 2017 and 2019 UK general elections, I saw the increased polarisation of those Facebook conversations and with it increased incivility, partisanship and sectarianism.

During the 2019 election, I noticed how memes from far right US Facebook pages were being posted and spread via people in the UK constituencies I was studying.

Curious about what was going on, she researched and discovered this …

the meme also led me to profiles that appeared to belong to UK mothers and grandmothers engaging with QAnon conspiracy theories from the US. This follows a pattern seen by other researchers in this field, for example Daniel Halpern and his colleagues who found women and people with politically right-leaning views more likely to share conspiracy theories …

… freely interacting with content from both the UK and the US…

You might perhaps be tempted to flee and find some remote place like Scotland as a safe haven. Alas no, you may need to rethink that plan. As is pointed out by some local media, it is also happening there … QAnon: Scottish child abuse protests linked to US conspiracy cult.

This perhaps leads you floundering in despair and wondering what we can really do when those around you become infected with this virus of the mind.

Guardian – Sept 27 : If your friends or family have fallen for an internet conspiracy cult, here’s what you should do

Van Badham has some very good advice. Such guidance is necessary because while it may be frustrating for professional fact-checkers, it is devastating for families who simply do not know what to do.

the truth has done little to dissuade QAnon believers from the fictions of their conspiracy mythology. Unsurprisingly, the “Pizzagate” conspiracy that was QAnon’s forerunner should have fallen apart when an adherent wielded an assault rifle in a Washington pizzeria because he believed Hillary Clinton and her associates were running a child sex ring in its basement. The gunman found no Clinton, no children and no basement – and yet the themes of the conspiracy endure

2….people reach out to social media when they’re seeking human contact; one of the most powerful lures of a cult is the socialisation it offerswhen individuals are in distress. With everyone in distress from coronavirus, maintaining meaningful spoken communication with loved ones through phone calls and – where safe – visits are more important

4. … engage gentle private dialogue not to argue facts, but to encourage doubts….

5. Experts recommend affirming to the “higher selves” of believers….

6. Don’t expect an immediate deconversion from the person you’re trying to help. People who’ve left QAnon described to Rolling Stone their doubts like an accumulation of “cracks”, not a sudden revelation. Work in a group with other concerned friends and family members to reach out.

It is all very good practical evidence-based guidance. Be aware, the above is a brief summary, I recommend reading it all to fully grasp it.

You might be tempted to think that this is all new and nothing like this has ever happened before. But very much exactly this has happened in the past. In the 1980s and 1990 there was what we now know as the “Satanic ritual abuse panic“. QAnon is simply rinse and repeat of much of that, a replay. Read the wikipedia page on it all that I just linked to in the previous sentence and you will find very familiar conspiracy claims floating about decades ago.

Yes, I wrote what follows at the end of last week’s posting; it still remains true.

We are in war right now. It is not a physical fight but rather is a battle that is taking place for the manipulation and dominance of minds. The field of action is Twitter, Facebook, YouTube, Reddit, etc…

Will you be manipulated into being an unthinking pawn by being ensnared by this cult?