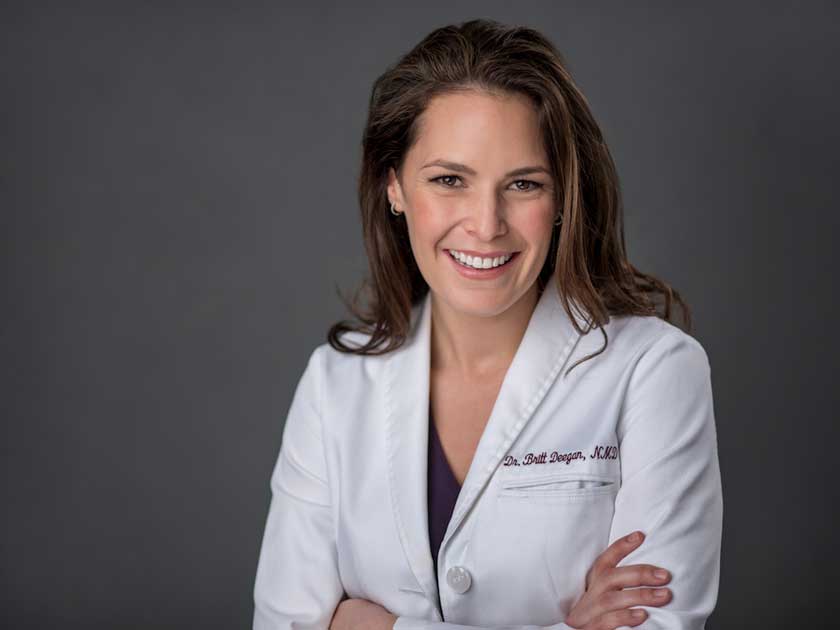 Back in January 2018 the news was that Naturopathic cancer quack Colleen Huber was attempting to silence criticism of her practices by suing Britt Hermes (pictured above). Britt did not back down, but instead let the case proceed. The latest update is that she has won, the judge has ruled in her favour.

Who is Britt Hermes?

She lays out her story on her well-known blog “Naturopathic Diaries”. Here is an extract …

I used to be a naturopathic doctor. I earned my degree at Bastyr University in 2011 and went on to complete a one-year naturopathic “residency” at a private clinic in Seattle. I then moved to Tucson, Arizona where I practiced alongside other alternative health practitioners. I stayed here until I retired from the profession in 2014. I now live in Kiel, Germany.

I left naturopathy with a bang. In the spring of 2014, I discovered that my boss, also a naturopath, had been importing and injecting a non-FDA approved medication called Ukraine to cancer patients. I resigned from his practice and reported him to the Arizona naturopathic medicine board and the state attorney general. During my final meeting with him, my former boss informed me that he knew he was operating in the “grey zone” and that this was common in the naturopathic profession.

Naturopathy is not what I was led to believe. The profession functions as a system of indoctrination based on discredited ideas about health and medicine, full of pseudoscientific rhetoric and loaded with ineffective and dangerous practices. Naturopaths must be highly scrutinized because they have an ongoing history of deceit and exploitation—veiled in good intention.

Since my departure from the profession, I have been working to understand my former biases surrounding naturopathic medicine and why I was drawn to it. I thought I was highly trained and medically competent, but I could not have been more foolish.

I now write about the evidence, or lack thereof, of naturopathic methods and the ethical and educational shortcomings of the fledgling profession

Why was she being sued?

The full story of what happened is well-documented within this posting on the Science Based Medicine website. Again, below is an extract. You can click the link to get the full story …

…In February, 2016, Hermes discovered that her name had been misappropriated in three registered domain names. One, brittmariehermes.com, was a snarky “tribute” website, while the other two redirected the reader to the homepage of the American Association of Naturopathic Physicians. Upon investigating further, Hermes found that one of the eponymous domain names was registered with an email address at the domain natonco.org, the website of an organization called the Naturopathic Cancer Society, a non-profit run by self-appointed cancer expert Colleen Huber, a “Naturopathic Medical Doctor” who practices in Arizona….

…based on her cyber-research, Hermes wrote a post on her blog: “Is dubious cancer ‘doctor’ Colleen Huber cybersquatting my name?” The post chronicled her discoveries about the misappropriation of her name and her efforts to fight back, including the fact that she had to go to the expense of hiring an attorney in the U.S. to assist in reclaiming her name. It also criticized Huber and her quack treatments, her use of a dubious Institutional Review Board (IRB) for her equally dubious research, and her questionable charitable organization. Hermes backed up her criticism of Huber’s research with a reanalysis of the data by Thomas Mohr, an oncology researcher at the Medical University of Vienna….

… Huber doubled down. She hired a German attorney, who sent a cease and desist letter to Hermes…

… Hermes refused and responded to these claims in a second post, “Is Colleen Huber a cancer quack? And more legal thuggery.”…

Huber’s cease and desist letter boomeranged into a fresh round of criticism of her quackery. Our good friend Orac deconstructed Huber’s bogus cancer treatments and her questionable research over on Respectful Insolence. Steve Novella, MD weighed in as well here on SBM. Taken together, their comments left Huber and her research in shreds.

But Huber is nothing if not persistent. Perhaps due to good old forum shopping for a more plaintiff-friendly jurisdiction, Huber has now filed suit against Hermes for defamation in Germany, where there is no protection against SLAPP lawsuits.

Unfortunately for Huber, the boomerang struck again in response to her lawsuit. This time, it was Edzard Ernst, MD, raising anew questions about Huber’s extravagant claims. Orac also posted with an update on Huber’s latest attempt to silence Hermes.

The suit has also prompted an international effort against this attempted suppression of well-documented criticism of naturopathic practices.

Since I do personally know Brett and her husband, I was also posting about this at the time encouraging readers to join the effort and support her.

From her posting here …

On May 24, 2019, the District Court (Landgericht) of Kiel, Germany ruled against naturopathic cancer quack Colleen Huber in a defamation lawsuit she brought against me….

The final hearing took place on April 3, 2019. During the hearing it became rather apparent that the judge was not having any of Huber’s lawyer’s legal theories. In a last minute attempt before the hearing concluded, Huber’s lawyer made a motion to accuse me of unfair competition against Huber. Per German law, this claim requires that I would be in a competitive relationship with Huber, so I’d have to be a practicing naturopath in the same geographical region as Huber and providing similar goods and services. When Huber’s lawyer noticed that he was not making ground here, he doubled down by claiming that Huber and I were competitors as public speakers! To put it mildly, the judge found these theories to be quite colorful and, rightly so, did not buy it.

In the end, the court fully ruled in my favor, stating that Huber’s points of contention were invalid because my statements were protected speech under Article 5 (1) of the German constitution.

The court concluded that Huber is a public figure as a so-called prominent naturopath in the USA and is therefore not immune from criticism. The court also recognized that naturopathy is a controversial field, especially for alternative treatments for cancer. My criticisms of Huber are therefore entirely legal. Furthermore, the court determined that Huber’s points of contention are my personal opinions and are not malicious. According to the German Supreme Court, an opinion which may include facts has to be judged as an opinion as long as one does not blatantly lie. I had reason to believe that Huber was cybersquatting domains in my name, which I phrased as an open question and not as a statement of fact. In an attempt to reveal the truth to the court, we requested a “subpoena” of the domain name registrant GoDaddy and the website hosting service Wix to provide the original owner of the domains and hosted sites. Huber opposed this motion and, per German law in this special case, the court was not permitted to force GoDaddy to divulge this protected information. Nevertheless, the court ruled 100% in my favor.

Huber has the right to appeal until the beginning of July 2019, which I would zealously fight.

This is very much a moral and ethical issue and is not simply a difference of opinion.

The facts are clear, Colleen Huber is a quack who is promoting cancer treatments that do not have any robust scientific evidence. Thomas Mohr, an oncology researcher in Vienna reanalyzed Huber’s data that supposedly supported her treatments. This revealed that the risk of death with Huber’s therapies appeared to be 10 times higher compared to those patients who left her practice to pursue conventional cancer treatments.

Criticism of Hurer’s “treatments” is wholly appropriate and necessary. Attempts to silence and gag such criticism via legal bullying is utterly abhorrent.