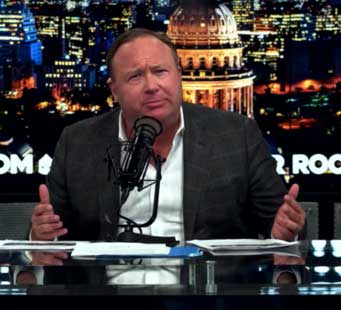 Both Fox News and also Alex Jones have a rather well-known reputation for being promoters of fiction as fact. If either of them are your only news sources, or are simply your primary news sources then it is distinctly probably that your grasp upon reality and facts is, and will continue to be, rather elusive.

If you seriously doubt the above, there here are a couple of references …

Actions often have consequences, and so it was perhaps inevitable that lawsuits would happen at some point.

There are two new lawsuits, so let’s take a look at each in turn.

27 year old Seth Rich, a DNC staffer, was tragically murdered when a robbery happing at his place took a nasty turn. Sean Hannity of Fox News along with others working for Fox News vigorously promoted the claim that he had been coordinating with WikiLeaks in order to leak Hillary Clinton’s emails and may have been killed as a result of it. That story turned out to be complete fiction and so they eventually retracted it. They had unfortunately breathed life into this fiction and so it still continues to be promoted as fact by some.

The Rich family claims that the “defendants’ conduct was extreme and outrageous” in what they allege was a deliberate effort to portray Seth Rich as a “criminal and traitor to the United States.”

“No parent should ever have to live through what we have been forced to endure. The pain and anguish that comes from seeing your murdered son’s life and legacy treated as a mere political football is beyond comprehension” Joel and Mary Rich said in a joint statement.

Leonard A. Gail of Massey & Gail LLP, a lawyer representing the Riches, said: “Joel and Mary Rich have brought this case to hold Fox News, Fox reporter Zimmerman, and political operative and Fox News contributor Butowsky, accountable for their reprehensible actions. Whether motivated by party politics, ratings, corporate profit, or personal gain, we hope to help prevent this kind of malicious and reckless behavior in the future so that others can be spared the hell the Riches have had to endure.”

Brennan Gilmore is taking Alex Jones to court. Least you wonder who Alex Jones is, he is the guy who promotes, via his InfoWars brand, any and every whacky conspiracy claim, and much of it is deeply outrageous, offensive, and absurd. As an example he claimed that the parents of the children murdered at Sandy Hook were crises actors, and that their slain children never actually existed at all. Imagine not only enduring the agony of the trauma of the loss of a child, the overwhelming grief and loss, and then having heaped on top of it all, the claim that you are an actor  and that your lost child never actually existed. Then you get harassed by people who actually believe this BS.

Brennan Gilmore is suing him along with others, not specifically because of Sandy Hook, but because of the manner in which the absurd false claims made by Jones and others regarding Mr Gilmore’s supposed role as a crises actor at Charlottesville have destroyed his life.

They are all being sued.

Alex Jones is a menace to society. I’m suing him.

On Aug. 12, 32-year-old Heather Heyer was tragically killed and at least 19 others were wounded when a driver plowed his car into a crowd of counterprotesters during the weekend of the infamous “Unite the Right” rally in Charlottesville, the close-knit college town where I went to school and where I live now.

I saw this happen right in front of me. To me, it was clearly deliberate. I captured that horrible moment on my phone’s camera, shared the video with police and posted it on social media. Not long after that, I was verbally attacked by Infowars’ Alex Jones and other conspiracy theorists, who wanted to portray me as a “deep state” operative motivated by a desire to undermine President Trump and his administration. As a result, my family and I have been attacked and threatened.

That’s why I’m suing for defamation.

My footage was covered on cable news and ran all over the Internet. During interviews, I spoke clearly about the hatred and violence on display that day. After that, websites such as Infowars and the Gateway Pundit started pushing conspiracy theories.

From Infowars: “They had known CIA and State Department officials in Charlottesville, first tweeting, first being on MSNBC, CNN, NBC. The mayor is involved. Everybody is a cut-out.”

Also from Infowars: “One guy is paid 320 thousand a year on the payroll of Soros. He doesn’t just get money from Soros, he personally is paid 320 a year, and then he is there — CIA, State Department — and he is on the news.”

And from Gateway Pundit: “The random Charlottesville observer who was interviewed by MSNBC and liberal outlets turns out to be a deep state shill with links to George Soros. It looks like the State Department was involved in Charlottesville rioting and is trying to cover it up. But after Deep State got caught they are trying to erase this guy from their records.”

As I state in my suit, these statements are all aimed at me, meant to defame me and, in each case, contain disgusting fabrications.

After the conspiracy theories about me spread online, my family and I were subject to harassment, threats, hate mail and hacking attempts. Someone mailed an envelope containing a suspicious white powder residue and a four-page diatribe describing how I would burn in hell. I’ve been accosted on the street in Charlottesville and the harassment continues to this day.

If you search Google for my name and “deep state,” you get a raft of accusations that I’m an operative with an agenda — with a few even claiming I helped organize genocide. My professional and personal lives have been irreparably harmed by these blatant falsehoods and targeted character assassination.

The comments under Mr Gilmore’s article are all very much supporting him. Often when you read comments under something you despair for the rationality of many. Read those comments and you will instead find that you reap hope that there are decent people out their who will happily support Mr Gilmore (as I do), and quite rightly oppose the actions of Mr Jones. Well yes, a few nutters inevitably pop up as well.

One common patten is that often those being sued are wealthy enough to simply buy their way out by agreeing a sum for the case to go away. In this instance that is not going to happen. Mr Gilmore has stated that no settlement will be accepted, he is taking this all the way.

How will this play out, does he have a case?

His lawyer commented as follows …

Andrew Mendrala, supervising attorney of the Georgetown law clinic, said Gilmore had a strong defamation case given the harm he suffered, adding that he hoped the suit would help prevent these kinds of damaging conspiracy theories.

“The first amendment does not protect this type of speech. We think a victory would really protect people like Brennan in the future,” Mendrala said in an interview.

When asked to comment, InfoWars, Jones and West stayed silent. Hoft, the Gateway Pundit, did not do that, but instead did this …

..published a response on Gateway Pundit on Tuesday that called Gilmore an “unhinged leftie hack” and repeated many of the conspiracy claims.

… which simply becomes yet more evidence against him in this case.

Personally I hope with a deep earnest hope that both Fox News, and also Alex Jones, the Gateway Pundit, and others, get completely and utterly nailed to the wall.

Breath in deeply and enjoy it, because what you are now experiencing is a breath of fresh air.