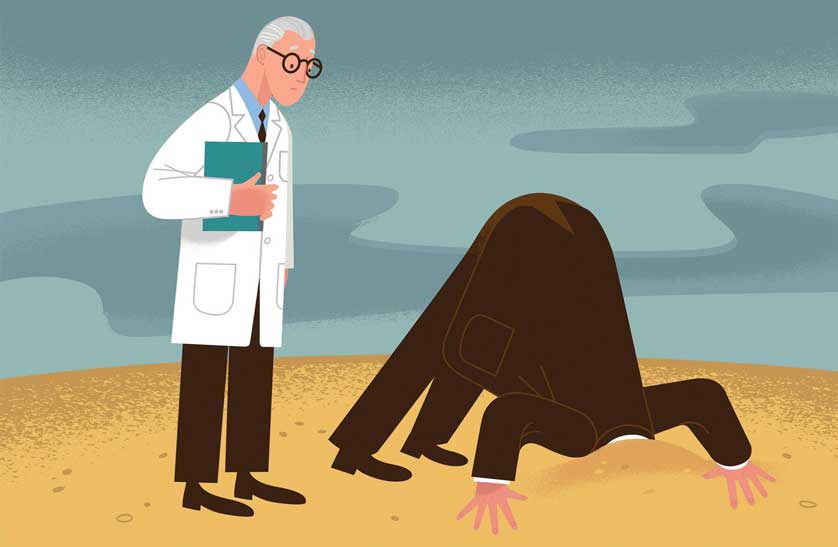 The New York Times has a great article regarding the perils of simply ignoring what the evidence-based science community is telling you. The opening example they have concerns the now infamous 1952 killer fog that happened in London.

The Great Smog of London

In December of 1952 there was a severe air-pollution event. At the time coal burning was common for power generation and so this event consisted of a combination of a dense fog that was also filled with particles from burning coal. The windless weather conditions enabled this thick layer of smoke-fog (hence the term smog) to sit over the city for a few days. It was thick, deep, and reduced visibility to about two feet. It was so dense that it even seeped indoors. Lack of visibility was not the problem, the air quality was. The immediate impact was that about 100,000 people were made seriously ill and 4,000 died during the event. Over the following months another 8,000 people died as a result of this event. Most of the victims were very young or elderly, or had pre-existing respiratory problems.

Even as it took place, there was no panic because most did not realise what was happening. It was only later when the medical services published the statistics that the realisation sunk in.

It was the worst air-pollution event in the history of the UK.

The point of the New York Times article is not the event itself, but rather that there had been warnings about this, examples of something similar just a few years before, and even a Weather forecast advising it was about to happen …

Had London acted as had been suggested after a nearly identical disaster struck Donora, Pa., four years earlier, many deaths could have been avoided.

…British scientists had been warning of such a disaster, but alas, the protective measures they suggested were approved by lawmakers but never implemented. To make matters worse, the government ignored its meteorologists’ warning that an extraordinarily dense fog was about to descend on London.

It took nearly four years for Parliament to pass the Clean Air Act of 1956 that restricted the burning of coal in urban areas and helped homeowners convert from coal to less harmful ways to heat their homes.

This is not a story about pollution, but instead is an article regarding the manner in which societies often ignore what the subject matter experts are telling them.

The London killer-smog event is not the only example.

Ignoring the experts: Other Examples

The article goes on to illustrate the pattern …

History is filled with examples of scientifically sound guidance that was ignored or pilloried by those in power. In the late 1990s, for example, half a dozen major health agencies, including the Department of Health and Human Services, endorsed a national needle exchange program to curb the spread of H.I.V./AIDS. But President Bill Clinton rejected the advice, and the resulting H.I.V. infections cost the health care system as much as half a billion dollars.

Trump has a persistent habit of empowering the most incompetent buffoons he can possibly find and then appointing them to positions of national responsibility. I’m not simply thinking of a few rather obvious recent examples. This pattern goes all the way back to the start of his administration. For example Scott Pruitt who was appointed to run the EPA, gets a special mention …

Last March, Scott Pruitt, newly appointed to head the Environmental Protection Agency, rejected the previous administration’s proposal to ban agricultural use of a Dow Chemical Company pesticide, chlorpyrifos. The agency’s scientific advisory panel had concluded in 2016 that children risked irreversible brain damage and neurodevelopmental problems from very low levels of exposure to food residues of the chemical, which continues to be widely used on fruits and vegetables.

In hopes of bolstering the coal industry, Mr. Pruitt, who has rejected established climate science, has also scrapped regulations in the Clean Power Plan put in place by the Obama administration to minimize heat-trapping pollution. A warming trend in sea surface temperatures in the North Atlantic in recent decades has been strongly associated with the spread of potentially deadly marine pathogens like Vibrio cholerae, the cause of cholera, and V. parahaemolyticus, a cause of food poisoning, and could lead to widespread outbreaks.

Food safety measures are also in jeopardy. Enforcement has been delayed indefinitely of crucial rules in the Food and Drug Administration’s Food Safety Modernization Act, enacted seven years ago with bipartisan support to protect consumers from exposure to dangerous pathogens like salmonella and E. coli. Some of those who harvest, package and store foods produced on farms are now exempt from the act’s rules to prevent contamination of the food supply. Yet, each year 48 million people in this country are sickened, 128,000 are hospitalized and 3,000 die from preventable food-borne diseases.

We live in an age where for some opposition to well-established scientific fact is dismissed as myth, and cultural myths are promoted as fact.

Rather obvious examples include:

Enact such thinking as official policy and we will reap the consequences.

On 28th January 1986 the Challenger shuttle disintegrated after launch, killing all seven astronauts on board. Yes, O-Rings, but more importantly, engineers at the Marshall Space Flight Center had written to the manager of the Solid Rocket Booster project pointing out that the design was seriously flawed, not safe, and utterly unacceptable. The manager in question discarded what the experts were telling him, and did not forward these memos to anybody.

The accident investigation revealed similar patterns. On the day of the launch Thiokol called Nasa and recommended no launch because it was too cold. They had specific concerns regarding low temperatures and O-rings. Under pressure from NASA staff Thiokol management reversed itself and recommended that the launch proceed as scheduled – they opted to ignore their own engineers.

So the point is this – be it the challenger accident, or climate change, or for that matter any other evidence-based position, there is the unavoidable …