John Sweeney is a BBC Panorama reporter who, while making BBC Panorama’s Scientology and Me in 2007, became famous because he lost his rag on camera and started yelling abuse at them … rightly so because they had been pushing all his hot buttons with the aim of getting him to do exactly that. He has an … Read more John Sweeney’s latest thoughts on Scientology

I’ve blogged about these folks before here … what prompts me to return to the subject is an article in today’s UK Guardian. It is actually a reprint from the New Yorker, they have re-printed it because they felt it was that good, and I agree, so I’m pointing you at it. Should you be … Read more Leaving $cientLOLogy

Lets start with the famous L Ron Hubbard quote … “Writing for a penny a word is ridiculous. If a man really wanted to make a million dollars, the best way to do it would be start his own religion.” ~ L Ron Hubbard. I bet you can guess where this post is going … … Read more $cientLOLogy 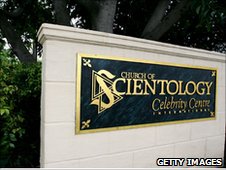 Do you recall the Panorama reporter John Sweeney who had a yelling match on camera with some folks from that truly evil cult, Scientology? Well guess what, there is an update on it all on tomorrow nights Panorama. [Tues 28th Sept, BBC 1 at 9pm]

Just to put this in context, here is a bit of background. Scientology has been described as a cult that financially defrauds and abuses its members, charging exorbitant fees for its spiritual services. Here are some references that prove this:

So what’s with all the references? Well, the Church of Scientology has consistently used litigation against all critics, and its aggressiveness in pursuing its foes has been condemned as harassment, so I need to give solid published facts when dealing with these gobshits. Remember, a month or two ago some councilor from wales tweeted a brief comment about them being stupid and found himself the subject of a formal complaint. But beyond the aggression, what they teach is complete bollocks. For example, they believe that souls (“thetans”) reincarnate and have lived on other planets before living on Earth.

Former members say that some of Hubbard’s writings on this remote extraterrestrial past, included in confidential Upper Levels, are not revealed to practitioners until they have paid thousands of dollars to the Church of Scientology

Another controversial belief held by Scientologists is that the practice of psychiatry is destructive and abusive and must be abolished.

However, if you wish to see a well-researched firsthand account about the fraud and deceit, then tune into Panorama tomorrow. Back in 2007 the church accused John Sweeney of bias and it attempted to stop the documentary from being broadcast, that campaign was backed by Scientology A-lister John Travolta, but it went on air anyway. Still, they did their best to kill it all … as described by the journalist John Sweeney …