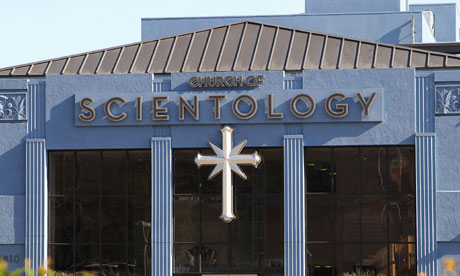 John Sweeney is a BBC Panorama reporter who, while making BBC Panorama’s Scientology and Me in 2007, became famous because he lost his rag on camera and started yelling abuse at them … rightly so because they had been pushing all his hot buttons with the aim of getting him to do exactly that. He has an article in the UK’s Guardian today in which he write lots of nice kind words telling us how wonderful Scientology is … er perhaps not …

the Scientology spring is gathering pace. The latest hammer blow against the church that likes to wear dark glasses is Beyond Belief: My Secret Life Inside Scientology and My Harrowing Escape – a misery memoir by Jenna Miscavige Hill, alleging that her uncle, Scientology’s “Pope” David Miscavige, is evil. A charge he denies.

Add a major lawsuit in the US by aggrieved ex-members, a criminal prosecution in Belgium, a war of attrition across the internet and three highly critical books so far this year.

Fear of Britain’s libel laws meant that Going Clear by Lawrence Wrightwas not formally published in the UK, and no big UK publisher would touch my book, Church of Fear, but all three books are now on sale and make for horrible reading for “Pope” Miscavige and his celebrity apostles Tom Cruise and John Travolta.

The point he then goes on to make is that this is not the end-game for Scientology, because as long as they can hide behind the shield of “Religion” in the US, they remain safe from scrutiny, mockery and taxes. Luckily things are a bit better in the UK, here to qualify as a religion you must be open to all, and open about what you actually believe. That is a test they fail, so for the purposes of English charity law: “Scientology is not a religion.”

It does all open up a rather wider issue, why does the banner “Religion” provide a cover to what is essentially fraud. Yes, we know that Scientology is a scam and can be demonstrated to be a scam, and does not deserve the shield that “religion” grants, but why should any other belief be granted such a status? The TV preachers who demand big donations for “Gods” work and then live a rather lavish lifestyle on the proceeds are also clearly running a fraudulent operation, but what of the mainstream beliefs that have been with us a lot longer?

Most who participate are of course truly decent people and really believe, and those who run the weekly services are also not attempting to practise deliberate fraud, but when you are faced with a claim that each week when a chap wearing a dress mumbles some incantation that will supposedly transform by magic some bread and wine into the actual body and blood of a god for others to consume, yet nothing measurable actually happens, then what are we to think? Fraud may indeed be a tempting word, but perhaps delusional is a better one.

People should of course be free to believe whatever they wish, and as long as they do no harm and don’t attempt to inflict weird beliefs upon others then they should be free to continue to do so … but as for being granted a special privilege that makes them immune to taxation, or public scrutiny, or even criticism …Nope.

As an aside, looks like Mr Sweeney’s Scientology expose book Church of Fear might be well worth checking out, and at £3.83 for the kindle version (the price of a latte or two), it is a good investment (and no, I have no financial interest in plugging it), it has lots of good reviews there on Amazon.