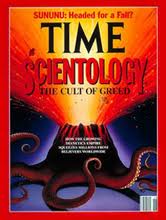 “Writing for a penny a word is ridiculous. If a man really wanted to make a million dollars, the best way to do it would be start his own religion.” ~ L Ron Hubbard.

I bet you can guess where this post is going … yep, spot on, the $cientLOLogy scam church is in the firing line today. So lets start with a brief outline of what they actually preach:

So are these folks just a collection of harmless nutters, or is there something far more sinister going on here? I personally opt for the latter choice for the following reasons

So, if you are ever tempted to think, “Nobody could ever be stupid enough to get involved?”, somebody will come along and prove you wrong.

Here is a nice video on all this by TheThinkingAtheist … enjoy.