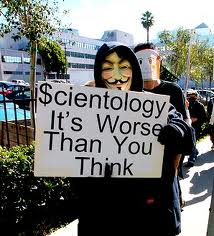 I’ve blogged about these folks before here … what prompts me to return to the subject is an article in today’s UK Guardian. It is actually a reprint from the New Yorker, they have re-printed it because they felt it was that good, and I agree, so I’m pointing you at it.

Should you be skeptical about Scientology? Well yes of course, but not just because they con members out of $$$, but also because of the indefensible human and civil-rights violations suffered by victims.

The article is long and detailed, but is a real eye-opener into the inner workings of this cult. Its the story of film director and screenwriter Paul Haggis’s resignation after being a member for 34 years. You might not have heard his name, well just in case not, here is a quick summary of who he is. He wrote the screenplay for Million Dollar Baby, which won the Oscar for Best Picture in 2004, and he wrote and directed Crash, which won Best Picture the next year. Davis, too, is part of Hollywood society: his mother is Anne Archer, who starred in Fatal Attraction and Patriot Games.

When he finally quit, he did it in a very public manner and forwarded his resignation to more than 20 Scientologist friends, including Archer, and Travolta. To Haggis’s friends, his resignation from the Church of Scientology felt like a very public act of betrayal. They were surprised, angry and confused. “‘Destroy the letter, resign quietly’ – that’s what they all wanted,” Haggis says. But Haggis will not be silenced …

‘I had such a lack of ­curiosity when I was in the church. It’s stunning to me because I’m such a ­curious person.’

The article then goes through in detail what really goes on inside this truly wicked cult. If only a fraction of these accusations are true, we are talking about serious, indefensible human and civil-rights violations.

Miscavige [The current head of this cult] was a serial abuser of his staff. “The issue wasn’t the physical pain of it,” Rinder said. “It’s the fact that the domination you’re getting – hit in the face, kicked – and you can’t do anything about it. If you did try, you’d be attacking the COB” – the chairman of the board. Tom De Vocht, a defector who had been a manager at the Clearwater spiritual centre, told the paper that he, too, had been beaten by Miscavige; he said that from 2003 to 2005, he had witnessed Miscavige striking other staff members as many as 100 times.
…
Miscavige came to the Hole one evening and announced that everyone was going to play musical chairs. Only the last person standing would be allowed to stay on the base. He declared that people whose spouses “were not participants would have their marriages terminated”. The St Petersburg Times noted that Miscavige played Queen’s Bohemian Rhapsody on a boom box as the church leaders fought over the chairs, punching each other and, in one case, ripping a chair apart.
…
They were 10 years old, 12 years old, signing billion-year contracts – and their parents go along with this?” Haggis told me. “Scrubbing pots, manual labour – that so deeply touched me. My God, it horrified me!
..
If they try to leave, the church presents them with a “freeloader tab” for all the coursework and counselling they have received; the bill can amount to more than $100,000. “Many of them actually pay it,” Haggis said. “They leave, they’re ashamed of what they’ve done, they’ve got no money, no job history, they’re lost, they just disappear.

I’ve always known that this was a wicked cult and that it was bad, but I honestly had no idea that it was this bad. The fact that they scam $$$ out of members is public knowledge, also the fact that they come down hard (legally) is known by many, but the scale of the abuse endured by their members was a revelation to me. They truly do earn the title of “Gobshits”.

Now that Haggis has gone very public, what will happen next? Well, given that he knows how they operate, he suggests that it will play out like this …

“These people have long memories,” he told me. “My bet is that, within two years, you’re going to read something about me in a scandal that looks like it has nothing to do with the church.”

His final words are also interesting, especially since it comes from a smart intelligent and famous individual …

To read the entire article in the Guardian (and I encourage it), click here.