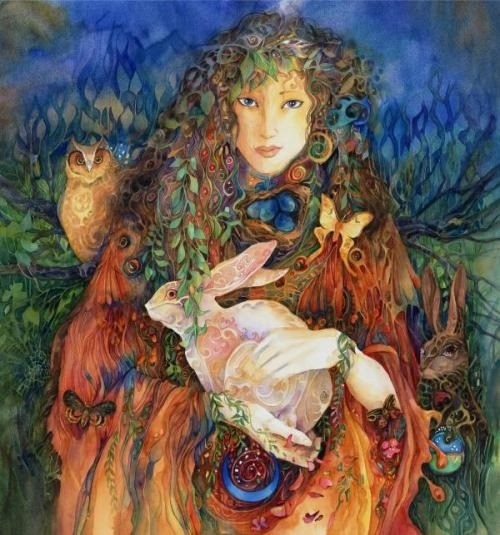 If you go to the Wikipedia page on Easter, and proceed to dig into where the word “Easter” comes from, then you find this …

The most widely accepted theory of the origin of the term is that it is derived from the name of an Old English goddess mentioned by the 7th to 8th-century English monk Bede, who wrote that Ēosturmōnaþ (Old English ‘Month of Ēostre’, translated in Bede’s time as “Paschal month”) was an English month, corresponding to April, which he says “was once called after a goddess of theirs named Ēostre, in whose honour feasts were celebrated in that month”

This origin might indeed be widely accepted. There is however one little flaw here, it is most probably not true at all.

When it comes to historical references to Ēostre, then there is exactly one reference, and it is that reference in its entirety that was resurrected in the 19th century and then vigorously promoted by the Internet in more recent times.

The reference comes from The Reckoning of Time, an Anglo-Saxon text written in 725 CE by the Northumbrian monk Bede. There he explains that the lunar month of Eosturmonath “was named after a goddess… named Eostre, in whose honour feasts were celebrated.” … and that’s it in its entirety, beyond this we have nothing. Here is a modern translation of the latin …

Eosturmonath has a name which is now translated “Paschal month”, and which was once called after a goddess of theirs named Eostre, in whose honour feasts were celebrated in that month. Now they designate that Paschal season by her name, calling the joys of the new rite by the time-honoured name of the old observance.

The problem here is that there is no evidence that he was correct about this. There are no references or images of Eostre anywhere else or in anything else at all. He also documents Woden and Thor. They are verified as deities that were worshiped, but not so with Eostre. It appears to be far more probable that the name of the lunar month Eosturmonath  is actually a reference to “the month of opening” for the rather obvious reason that it is springtime.

The revival of the fable of Eostre being the Goddess of Easter was first proposed by Jacob Grimm (yes, the guy who wrote Grimms’ Fairy Tales) in 1835 within his Deutsche Mythologie. That revival is based upon this Bede reference, and from there it has taken on a life of its own.

For this goddess, we have no images, no carvings and no legends, just this single reference by Bede that appears to be speculation. For this reason most folklorists will dismiss the assertion that Easter is named after the goddess Eostre as a myth.

If you know of anything that can establish the claim that Easter really is named after an ancient deity named Eostre in a credible academic sense (hint: you can cite reliable sources to verify it), then please do drop a comment, I’m always quite happy to be corrected, because that way I learn something.

The rather popular Easter myth is that it is all about a god that gave birth to itself so that it could sacrifice itself to itself, all because a talking snake tricked the ancestor of all humans into eating some fruit. Many who quite rightly dismiss all that as myth, often point out that Easter is really all about the Germanic goddess Eostre, and yet what we now discover is that also is itself a myth.

Strive to believe as many true things as possible and put aside all myths, even when such fables appear to support our own lack of belief. When faced with the claim that Easter is named after a mythological ancient deity named Eostre … er no apparently not, because that is itself a modern urban legend.

We might not embrace the myths, and so while we might dismiss the supernatulalism as fiction, such dismissal need not prevent us embracing the festival. I wish you all a very happy Rabbit and Chocolate Egg inspired springtime holiday.

1 thought on “Does Easter come from Eostre?”