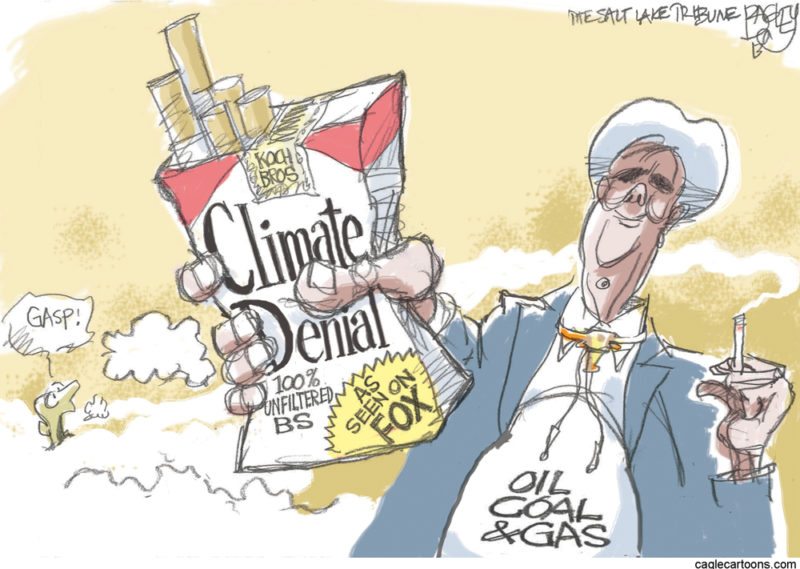 Yale Climate Connections has a fascinating article that consists of an interview with a former Climate Denier. It is an insight into why he changed his mind …

Former climate ‘denier’ regrets ‘how wrongheaded but certain I was’

It opens as follows …

John Kaiser wheeled a cart with a TV and VCR into the lobby of an academic building on the campus of the University of North Carolina-Wilmington, popped in a well-worn VHS cassette, and played a video extolling the virtues of an atmosphere rich in CO2.

“It was a video that was made to look like a news show; there were people who looked like anchors in it,” recalled Kaiser. It was part of a campaign to attract students to join a conservative movement on his undergraduate campus.

“[The video] was all about how CO2 levels are rising, but that’s great! Because plants need CO2, and the more CO2 there is, the more plants will grow and the more crops we’ll have. And the more we’ll have to eat and this will be an age of abundance because of all the extra CO2 in the atmosphere.”

I’ll not go through the entire Yale article, but will instead extract a few quotes.

Why was he a Climate Denier?

…“I think it would be accurate to describe myself as kind of an Evangelical fundamentalist at the time.”…

…“I think a lot of people on the right do what I did, which is that we work backwards from an ideological fear of government intervention to the idea that we can’t accept climate change.”…

Could he have been persuaded he was wrong at the time?

When asked if anything – any piece of evidence or persuasive tactic – could have changed his mind, Kaiser let out a drawn-out, pensive sigh. “At that time? No,” he admitted flatly. “I really had to experience the process of maturing and encountering not just new ideas on climate change, but new ideas that challenged my entire worldview.”

What happened, why did he change his mind?

One word sums it up … “education”.

…“You’ve probably followed the polling that says that the majority of Republicans are now fearful that advanced education is dangerous,” he said. “And I think my experience is kind of what they fear.”

“Looking back, I think the very first issue that got me moving away [from a conservative viewpoint], was the debate about gay marriage. That was the one where I got fed up with a lot of the people I knew on the right. And then I got angry about the drug war debates. And that got me fed up even more with people on the right. And it was just kind of like this snowball rolling downhill that picked up steam. And I just kept finding all of these issues where I said, well now I’m seeing the evidence points this way, but I had believed the opposite.”…

Why a stance against education?

It is not new, I’ve personally come across it before. When deeply embedded within a fundamentalist group in my teenage years, I well recall various individuals describing universities as “the pit of hell” and basically warning people that going there would have negative consequences.

If indeed you live inside an information bubble, then going to a place where your ideas and beliefs will be challenged and you will also be exposed to other ideas and beliefs, then yes, I truly do understand why some fear such places.

Having once been a denier and now has changed his mind as he matured, does Mr Kaiser have anything guidance to offer?

Yes he does, he has four points to make.

1. Make it personal and local.

…“Maybe when climate change starts affecting their hometown, that’s when they’re going to accept it because that just seems to be ingrained within conservatism, that it has to be something that I can feel locally in my community. I think one of the quintessential aspects of conservatism is a distrust of outsiders.” …

… “Convince them [conservatives] that there’s a way for private business to solve it. If there’s a dollar to be made in it, and you can promise them the government’s not going to be regulating things to do it, they’ll back it.” …

…“You need those people who are straight down the list Republicans, except, oh, you need to address climate change. Those people get some wiggle room. They get the ability to talk and be a little bit ‘off’ on that topic, because they can check all the other boxes.”…

4. Leverage the economics of renewable energy.

Hopefully that’s enough to tempt you into reading the full article.

So, it’s just about education then?

The reality is that this tends not to happen. The facts regarding climate change are well established. Those presenting denial arguments are presenting information that is seriously flawed. Debunk and lay out the facts, and what you will often encounter is an immunity to facts.

Belief in specific ideas is often not based upon facts, but instead is more about what we are emotionally invested in and how we identify ourselves. If you identify with a specific political or religious tribe, then you will tend to generally start with the conclusions that prevail inside that group and work backwards looking for things that confirm it, and also rejecting anything that conflicts. It is like this because you need to protect your emotional investment.

Finding somebody who has completely and quite radically changed their mind about something is fascinating because you are not simply interacting with somebody who got a bit of new information and so adopted a slightly different stance. Instead you are having an encounter with somebody who has had a transformative experience in which their identity, the way the view the world, and what they have invested in emotionally, has shifted. Why that happens and how that happens is fascinating to understand.