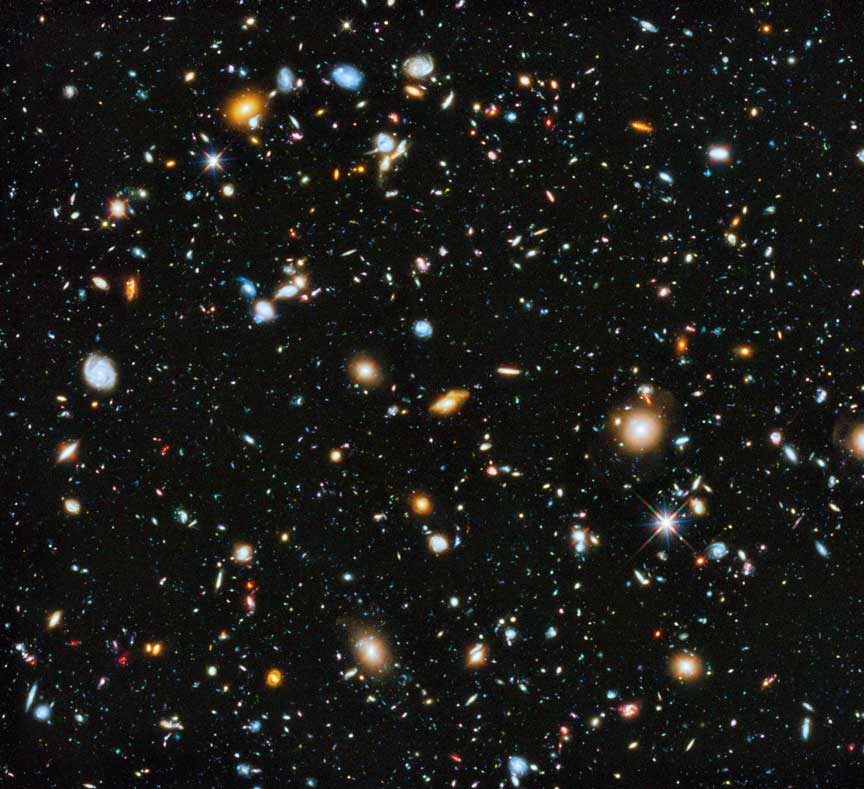 Regarding the question in the title, “How do we know how many Galaxies exist in the Universe?”, the short quick answer is that we do not have a precise number, instead what we have is an estimate that is based upon observational data collected by Hubble.

There have been recent stories within the media regarding a dramatic increase in the estimated number of galaxies within the universe, so what happened? To be a bit more specific, let’s start by asking where did the previous estimate came from, and then we can move beyond that to why it has  changed.

Back in 1995, just after the Hubble telescope was repaired, NASA pointed it at a dark patch of sky continuously for a period of about ten days (between December 18 and December 28). It was specifically a small region in the constellation Ursa Major and was such a tiny region of the sky that almost all of the light sources (roughly 3000) captured in that image are not stars within our galaxy, but instead are other galaxies within our universe. In other words each dot of light is a galaxy that contains anything ranging from 100 million to perhaps as many as 1 trillion stars or more. If you tried to wrap your head around the scale of that then you will fail.

The target patch of sky was selected with great care. It needed to be at a high galactic latitude and hence would not be obscured by all the dust and stars within the galactic disk of our own galaxy. It also needed to be within Hubble’s CVZ (Continuous Viewing Zone – the bits of the sky that Hubble can always see and will never be blocked by the Earth, or Moon during an orbit). It also needed to avoid light sources within our own galaxy. That included anything at other wavelengths (infrared, ultraviolet and X-ray). It really was not a random patch of sky, and truly was chosen with great care so that it could have a clear view beyond our Galaxy.

The results obtained became known as the Hubble Deep Field.

Hubble Deep Field was simply one of many steps, and what then came next is what is now known as the Hubble Ultra Deep Field in 2004, and then the Hubble eXtreme Deep Field (XDF) in 2012.

To get an idea of what is being seen, here is an image that illustrates how far out into the universe HDF saw, and contrasts it with HUDF. 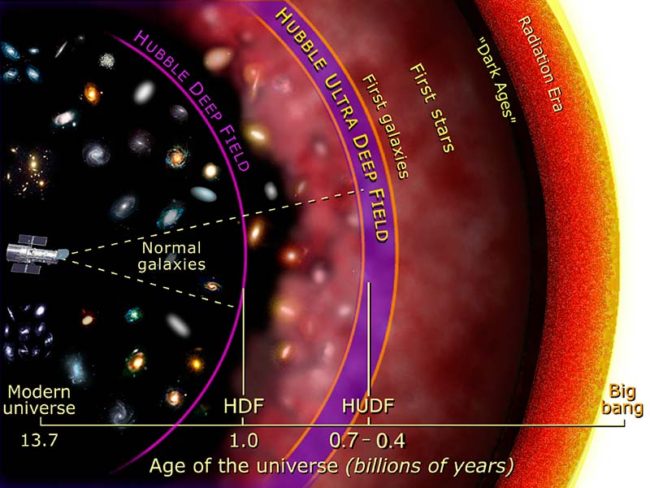 OK, so let’s focus back to our question. How many galaxies did all of this data suggest?

By seeing what is out there in these tiny regions of the sky it became possible to estimate that the entire observable universe contained roughly 100 billion galaxies.

Oh but what if that patch was unique?

There is what is known as the cosmological principle (basically the laws of physics are universal, hence everywhere you look should be the same). If indeed, as they did, you do the same deep view, in the other direction, then you should seen exactly they same, and that is example what they did with  the Hubble South Deep view in 1998.

Why has that previous estimate now changed?

That previous estimate of 100 billion or perhaps 200 billion (yes billion, not million) has been revised up to an estimate of at least 2 trillion. In other words that is an increase of ten to twenty times more. The term “Wow” does not even begin to describe that.

On 9th Oct a paper was published within the Astrophysical Journal and is entitled “The Evolution of Galaxy Number Density at z < 8 and its Implications“. It is this paper that is the source for all the recent media stories.

The abstract for the paper itself reads …

The evolution of the number density of galaxies in the universe, and thus also the total number of galaxies, is a fundamental question with implications for a host of astrophysical problems including galaxy evolution and cosmology. However there has never been a detailed study of this important measurement, nor a clear path to answer it. To address this we use observed galaxy stellar mass functions up to z∼8 to determine how the number densities of galaxies changes as a function of time and mass limit. We show that the increase in the total number density of galaxies (ϕT), more massive than M∗=106 M_0, decreases as ϕT∼t−1, where t is the age of the universe. We further show that this evolution turns-over and rather increases with time at higher mass lower limits of M∗>107 M_0. By using the M∗=106 M_0 lower limit we further show that the total number of galaxies in the universe up to z=8 is 2.0+0.7−0.6×1012 (two trillion), almost a factor of ten higher than would be seen in an all sky survey at Hubble Ultra-Deep Field depth. We discuss the implications for these results for galaxy evolution, as well as compare our results with the latest models of galaxy formation. These results also reveal that the cosmic background light in the optical and near-infrared likely arise from these unobserved faint galaxies. We also show how these results solve the question of why the sky at night is dark, otherwise known as Olbers’ paradox.

OK, so basically Christopher Conselice of the University of Nottingham in the UK and his team took the Hubble data and converted it into 3D maps. They then used some clever maths to infer the existence of other galaxies that can’t be directly seen via the single raw frame. The net result is that they can extrapolate from that 3D model the new estimate.

If you wade into the paper, which is open source and not behind a paywall, and manage to survive the mathematical onslaught, then you will be carried to this clause at the end of section 4.2 somewhere in the middle that reads …

there are at least 2 × 1012 (two trillion) galaxies in the currently visible universe, the vast majority of which cannot be observed with present-day technology as they are too faint.

Now let me emphasise two words there. Note the use of the term “at least“, and not “at most” or “roughly about“. Now that in itself is rather mind blowing.

OK, so now the skeptical bit.

There are a dizzying 2 trillion galaxies in the universe, up to 20 times more than previously thought, astronomers reported on Thursday.

Point 1 – This is a minor quibble.”dizzying” is a term that I would have perhaps used for the previous estimate of 100 billion galaxies each containing anything from 100 billion to 1 trillion stars. In fact even in that context “dizzying” is a gross under-distortion of such a reality. The new discovery that the previous number is wrong by a factor of at least 10 or 20 goes why beyond “dizzying” and leaves that term eating dust.

Point 2 – The story in the Guardian, and also in many other places, states it as a certainty and cites 2 trillion as “the” number. However, I do feel that it is quite important to grasp that this is simply a mathematical extrapolation based upon the data we have, and so at this point in time it is the best estimate we have. It is also, as previously observed, deemed to be the “at least” number and not the actual number.

As better instruments are built and as we find better ways to analyse the data collected, you can perhaps anticipate that the number may be revised and refined. The James Webb telescope is scheduled for launch into Orbit in 2018 and has a spec that will far surpass the capabilities of Hubble.

As we develop better instruments that enable us to see further, our understanding of where we are and what our place is within the vastness will inevitably grow.

James Webb is not the end-game, it is just the next step. What comes after that is the ESA (European Space Agency) Euclid mission with a currently planned launch in 2020. That will image 15,000 deg2 down to AB magnitude of 24.5 in the wide VIS filter, and yet even that will only be capable of imaging around 3.7 × 109 galaxies in total, or <0.1% of all galaxies in the universe.

Observing all the galaxies in the universe will require space telescope programs that are several generations beyond the above.

We truly have only just started this journey of discovery and have not even seen 99.9% of what is out there.