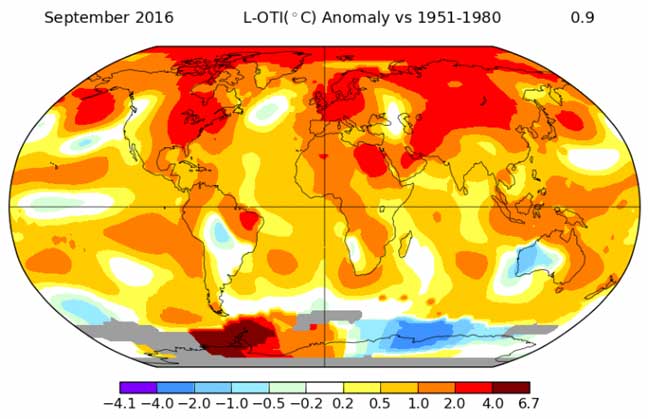 Now we have the data for September 2016 and it also is another record breaking month. It was the warmest September ever recorded.

Where is the raw data?

You can find it here on the NASA website. On the parent webpage, they explain …

Temperature analyses were carried out prior to 1980, notably those of Murray Mitchell, but most covered only 20-90°N latitudes. Our first published results (Hansen et al. 1981) showed that, contrary to impressions from northern latitudes, global cooling after 1940 was small, and there was net global warming of about 0.4°C between the 1880s and 1970s.

This raw data will eventually feed out into graphs and will result in announcements and stories that are used to communicate what is happening, so we can anticipate at some point that somebody will soon click to the fact that we just hit the one year mark for record breaking months and write an appropriate story about that for the media to pick up and run with.

But what about Urban Warming?

A common denier claim is that such numbers are distorted by weather stations picking up temperatures that are above the actual due to their placement near growing urban areas. That actually is a valid concern and so if weather stations were the only source then such criticism would stand. However, to address this very concern the folks doing the data gathering did actually think about this, they are not daft. They utilise many other ways of deriving the global mean readings, for example …

The results of all that analysis is that we find consistent estimates of the approximate magnitude of global warming. Putting aside this record breaking year, we can also over time clearly see the trend. It reached about 0.8°C in 2010, and that is twice the magnitude reported in 1981.

Another rather important aspect is that these are not localised regional specific numbers, but instead are global. In other words, we can rely upon such numbers to tell us the on-going story. Yes there are regional variations, for example measurements will be rather obviously larger in the Northern Hemisphere than the Southern Hemisphere, larger at high latitudes than low latitudes, larger over land than over ocean, so seeing it all from a global perspective moves away from such specifics and yields a simple number that can be grasped by non-specialists.

For further details on understanding the data in more detail you can check out Hansen et al. 2010. It compares alternative analyses and addresses questions about the perception and reality of global warming. Yes we have seasonal variations, and yes there are multi-year El Niño-La Niña cycles, and so when you read such papers you find that the subject matter experts carefully consider all of that and much more. When they take all of that into account, the underlying observation remains very robustly intact –

global temperatures have continued to rise rapidly in the 21st century, and that new record heights are being reached

It is not yet confirmed that this is the case for 2016, but instead we can clearly see a trend, hence it is just guess, but this is not a shot in the data, it comes from the existing data. NASA climate scientist Gavin Schmidt who is close to the data recently tweeted out an extrapolation of how 2016 will pan out …

June 2016 is the one exception to the chain of record breaking months.

But wait, June 2016 was supposed to have been a record breaking month, it was reported as such at the time, so what happened?

Basically more data happened. Yes, it was initially and officially a record breaking month, but last Monday new data from the Antaractic was received and that then demoted it to the third warmest June ever recorded.

Of all the recent record breaking months, the most extraordinary so far has been February 2016. That was the month that globally we came very close to the now famous 1.5 degree threshold of temperature increase. The scary thing about it is that it is the stated goal of the Paris Agreement …

… and yet even before the ratification process stated (last April), and long before it formally comes into force (next month in November), the global average temperatures were already starting to bump into that 1.5 degree goal.

Not only is doing nothing not an option, but it is quite probable that the currently agreed NDCs from the Paris Agreement will also not be enough. However, the Paris Agreement is not simply about the initial INDEs (Intended Nationally Determined Contributions), it is also about the creation of a framework in which the legally binding goals for greenhouse gas emissions will be continuously increased every five years.

Today the social focus is perhaps Trump and also BREXIT, but I would argue that the greatest challenge we actually face is climate change, and that in turn makes the Paris Agreement the most important human event in 2016.

Incidentally, looking back at the raw monthly data going all the way back to 1880, we will soon reach the 100 year anniversary of the coldest ever month – December 1916. With the current trend there is no risk of that coldest-ever record be breached, and that should not impress us, instead it should quite rightly scare us.