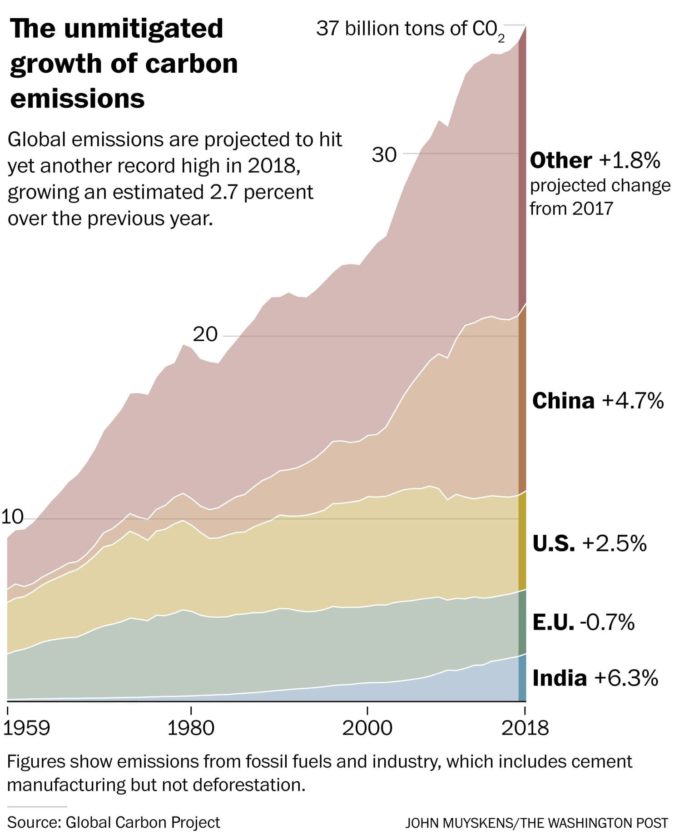 After flattening out for a few years between 2014 and 2016 the overall rates of Global carbon emissions in 2018 have once again reverted back to their rapid upwards trend.

Translation: if this does not change very soon, then we are well and truly F**ked.

Here are the numbers. 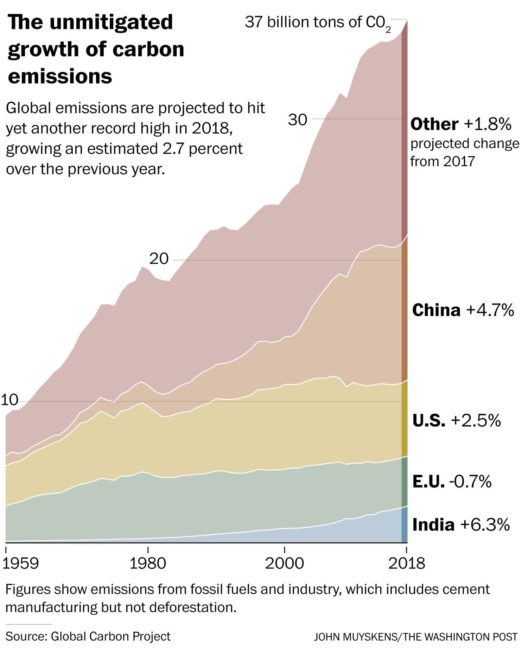 Where do these numbers come from?

The source is the latest 2018 edition of the Global Carbon Budget. (You can find this here – be aware that it is long and very detailed).

Is it a dependable accurate measurement?

Yes it truly is, it’s the very best we have. The list of contributors is long and vast, they represent many highly respected and well-known organisations such as NOAA, NASA, Princeton, and many other universities and institutes.

It represents the combined work of 53 different organisations spread across 13 different nations.

What is in the paper?

It contains a detailed description of the data sets and methodology used to compute the global carbon budget estimates for the pre-industrial period (1750) to 2017 and in more detail for the period since 1959. It also provides decadal averages starting in 1960 including the last decade (2008–2017), results for the year 2017, and a projection for the year 2018. Finally it provides cumulative emissions from fossil fuels and land-use change since the year 1750, the pre-industrial period, and since the year 1870, the reference year for the cumulative carbon estimate used by the IPCC (AR5) based on the availability of global temperature data.

Yes and no … or to put that a bit more clearly, this is the 2018 updated version.

This paper is updated every year using the format of “living data” to keep a record of budget versions and the changes in new data, revision of data, and changes in methodology that lead to changes in estimates of the carbon budget.

The net effect of this approach is a very high transparency and traceability in the reporting of CO2, the key driver of climate change.

Highlights for this 2018 paper

It points the finger at the bad boys ….

Yes, the EU number is negative and declining. As for the rest … not so good. 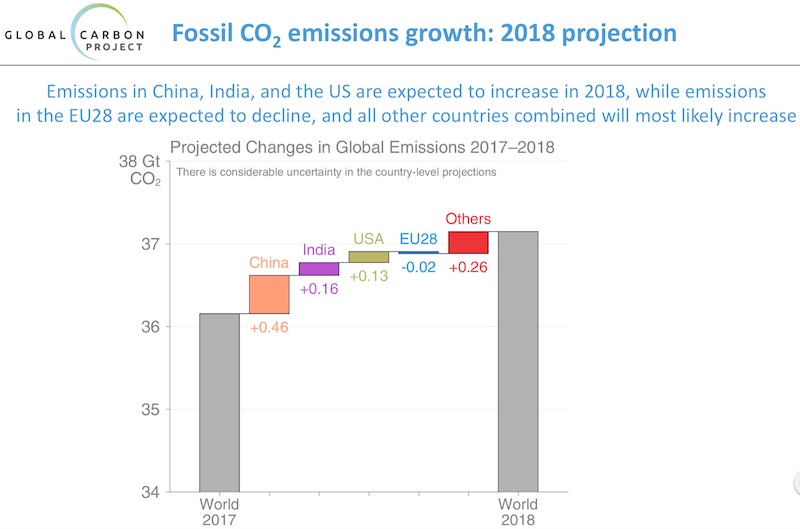 These are just projections at this point in time. It is however important to highlight asap that we have an uptick in emissions … 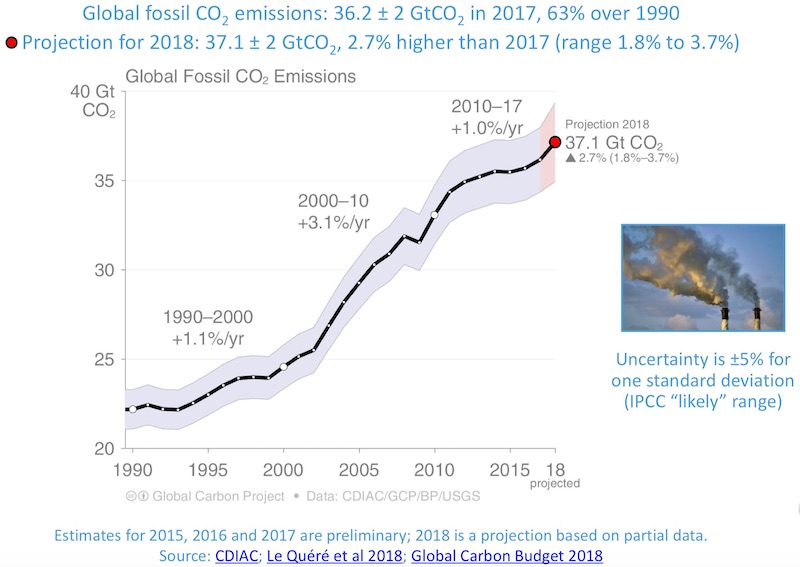 The Study also tells you where the CO2 is coming from 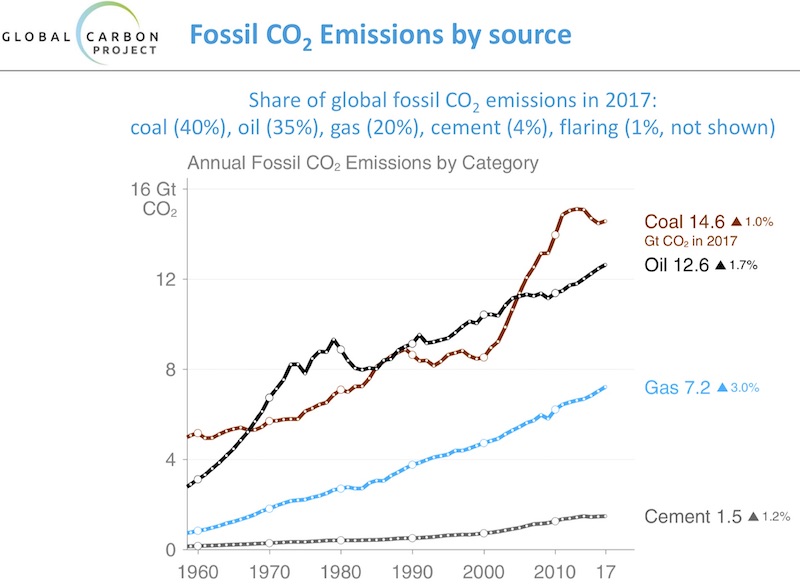 You can find all the details via the Global Carbon Project page here.

The Washington Post covers the story here – ‘We are in trouble.’ Global carbon emissions reached a new record high in 2018 …

…As for China, coal accounts for about 60 percent of China’s total energy consumption, but the government hopes to bring it down to 10 percent by 2050.

Thanks to increased investment in green energy, China’s carbon intensity, or the amount of carbon dioxide emissions per unit of GDP, declined by 46 percent by 2017 from 2005 levels, the Ministry of Ecology and Environment reported earlier this week. It had expected it would take until 2020 to reach the targeted 40-45 percent reduction.

“With these goals met, a very solid foundation has been laid for meeting the target of halting the increase of carbon dioxide emissions by 2030, and even accomplishing that sooner than planned,” Xie Zhenhua, China’s special representative for climate change affairs, told the state-owned news agency Xinhua ahead of the meeting in Poland.

But officials and analysts alike point out that the United States is not doing its part to combat global warming. “We would also love to see the United States embrace its responsibilities by returning to the Paris climate deal,” said Yang of the NRDC.

Despite the overwhelming challenges, Patricia Espinosa, executive secretary of the United Nations Framework Convention on Climate Change, still holds high hopes for the talks in Poland.

“I’m an optimist because of human nature,” Espinosa said in an interview. She suspects the spate of ominous climate news might have spurred a sort of tipping point, where societies begin demanding aggressive actions from their leaders to stave off the most disastrous effects of climate change.

“I think we have kind of reached the limit,” she said. “When we are facing the limit, I think we need to come up with something more creative, more ambitious, stronger and bolder.”

"Record-High Carbon Emissions Show 'We Are Speeding Towards the Precipice of Irrevocable Climate Chaos'" by @Corbett_Jessica for @CommonDreams: https://t.co/skJYTGzjf8

‘We are in trouble.’ Global carbon emissions reached a new record high in 2018. https://t.co/Bzc2cp8IiD pic.twitter.com/3GnrEGtfbD

Some grim news: global CO2 emissions from fossil fuels and industry will rise around 3% in 2018, the fastest in 7 years, dashing any hope of a peak. I break down the details of the Global Carbon Project data over at @CarbonBrief: https://t.co/U9d1lJ8w4M. A few key takeaways: 1/5 pic.twitter.com/qy75pV6O8A

Here is the emissions plot I shared earlier, updated with today's estimates from the Global Carbon Project. pic.twitter.com/ojM7LJSy2p

BREAKING: Global carbon emissions have begun to accelerate upwards again in 2017 and 2018, after a three-year lull.

It must be said: We are making the worst problem we have ever created even worse—at an ever-faster rate.

This is madness. We are self-sabotaging our own planet. https://t.co/ZBej3QMaLv