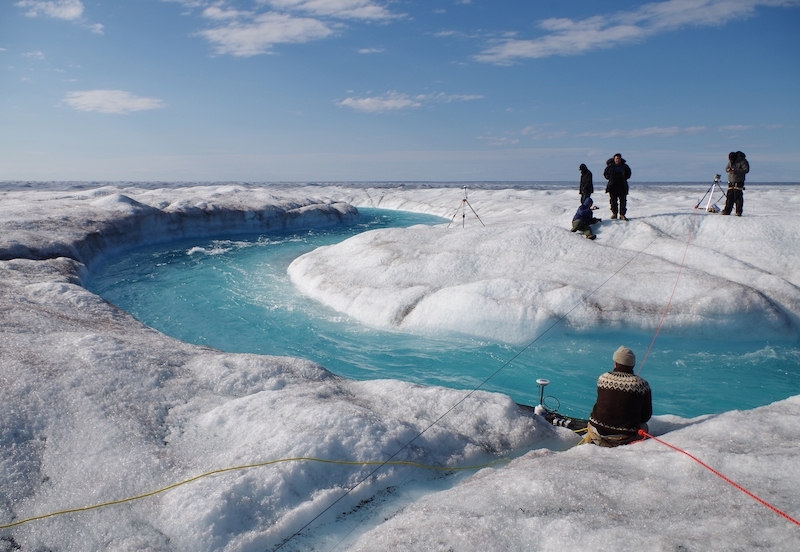 A new study that has just been published in Nature reveals that something dramatic is happening in Greenland.

The title of the study is “Nonlinear rise in Greenland runoff in response to post-industrial Arctic warming“.

When you are talking about a measurement of meltwater from a body of ice that by itself contains enough water to lift sea level by 20 feet, then the one word that you really really don’t want to see is the word “nonlinear”.

We have very precise and accurate measurements of the extent of the melt in Greenland via satellite technology. One problem with that is the lack of any measurements over a longer period. This study now resolves that and places it all in a far bigger context …

Here we present the first continuous, multi-century and observationally constrained record of Greenland ice sheet surface melt intensity and runoff, revealing that the magnitude of recent Greenland ice sheet melting is exceptional over at least the last 350 years.

How exactly did they do this?

They have managed to achieve this by conducting a very careful study of ice cores taken from central west Greenland. The term they use is “stratigraphic analysis”. Basically this means looking at the seasonal layering (stratification) contained within the cores and determining the degree of historical melt by measuring the refrozen melt layers. This approach has enabled them to reconstruct past melt rates.

Below are some illustrations of this taken from the study.

On the left you have an illustration of the simulation of positive trends in annual surface meltwater production over 1958–2016.

On the right it shows the locations of where their ice cores are situated within the Jakobshavn drainage basin (blue outline; basin 7.1) of central west Greenland and on the Nuussuaq Peninsula, as well as air-temperature observations integrated into a composite Ilulissat air-temperature record. The satellite image in b was obtained with the NASA MODIS instrument. 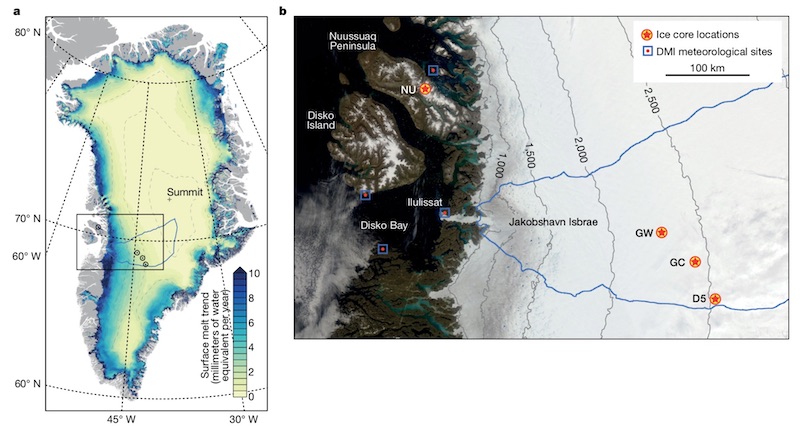 Just how reliable are their measurements?

There are independent models that predict what the melt rate would have been – they match.

We know what the melt rate was during the satellite era – once again we have a match.

Thus we can have confidence that the numbers derived by looking back over the last 350 years are realistic.

So what exactly have they got?

… and so that then naturally leads to this …

Here is a graphical illustration from the study. It reveals a pronounced 250% to 575% increase in melt intensity over the last 20 years, relative to a pre-industrial baseline period (eighteenth century) for cores from the Nuussuaq Peninsula (orange) and central west Greenland (red), respectively 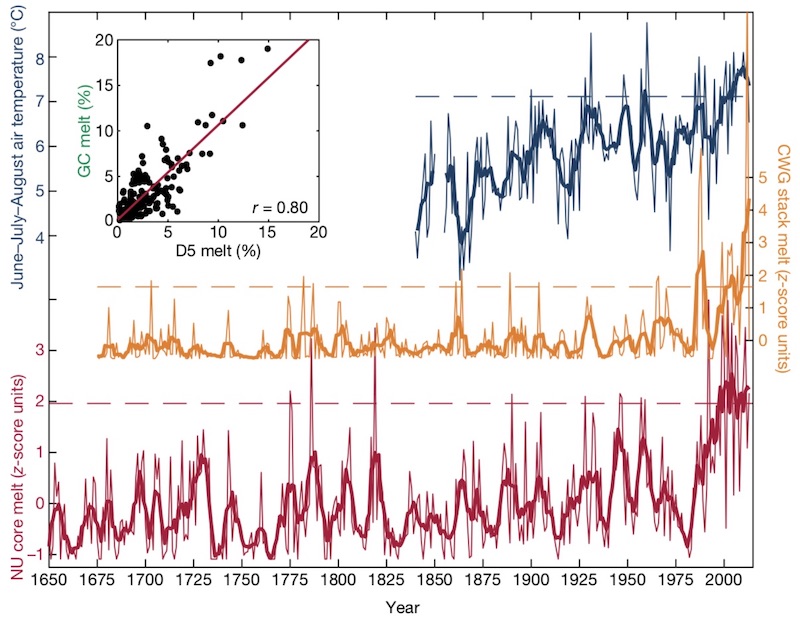 They sum it all up as follows …

Today, surface melting and melt-induced runoff in Greenland occur at magnitudes not previously experienced over at least the last several centuries, if not millennia. Melt–temperature nonlinearity and general circulation changes mean that further twenty-first-century warming has important implications for the ice-sheet mass balance, by accelerating the intensity of surface melting and amplifying Greenland ice sheet contributions to global sea-level rise.

Permit me to put this another way by deploying a one word non-scientific summary … yikes!.

Chris Mooney, a science writer for the Washington Post, tweets about the serious implications of this …

1. I was busy yesterday with the very big news that global carbon emissions went up again this year – fast. As a result, I missed a quite important and — as we’ll see – related piece of new research. https://t.co/qYKEdthgbD

2. This was the finding that the surface melting of Greenland is at higher levels than at any time in the last 350 years, and is showing a “nonlinear” response to rising temperatures. Study in Nature here. https://t.co/82PvSwpgEP

3. Greenland is the world’s second largest ice sheet, and currently the biggest ice loser among them. It contains 20 feet or more of potential sea level rise, and is already raising seas every year by close to a millimeter https://t.co/DtlCuphnvr

4. In the new research, scientists used ice cores pulled from the Greenland ice sheet to show that there hasn’t been anything like present day surface melting in the past several centuries.

5. “Our results show a pronounced 250% to 575 % increase in melt intensity over the last 20 years, relative to a pre-industrial baseline period,” for one of the ice cores, they write.

6. The fast-rising melt rate also seems tied to the shrinkage of Arctic sea ice, atmospheric changes and, perhaps, a slowing of the Atlantic ocean’s overturning circulation.

7. But the most important part of the research is probably the finding that this is “a clear non-linear melt-temperature relationship.” In other words, as temperatures go up, the rate of Greenland melting doesn’t tick up at the same pace. It goes up faster.

8. This is the kind of process that could lead to a significantly higher rate of sea level rise.

9. The researchers conclude that “only limited additional warming will greatly enhance the area of the ice sheet subject to meltwater runoff.”

10. Some parts of the ice sheet are at very high elevations and quite cold – or have been. The study is saying that they could be next if warming continues, and it won’t take much.

11.What the research may imply but doesn’t quite say – this would take another study – is whether this means we should expect more sea level rise out of Greenland during this century than previously predicted. (Greenland is currently the world’s top sea level rise driver.)

12.However, the study should be weighed in light of yesterday’s news that the world still can’t stop the growth of its carbon emissions.

13. We have a decade or so bring them down fast to limit warming to only another half a degree Celsius. And according to the latest research, even such “limited additional warming” could “greatly enhance” Greenland’s melting.

14.The point is, you probably don’t want to go past another .5C of warming if you have a nonlinear response in a system like the melting of Greenland. (Not that it’s the only one.)

15.Indeed, the recent IPCC 1.5 degrees report found: “Instabilities exist for both the Greenland and Antarctic ice sheets, which could result in multi-meter rises in sea level on time scales of century to millennia…. "

16. "…There is medium confidence that these instabilities could be triggered at around 1.5°C to 2°C of global warming.” https://t.co/cqxkpPX8eV

17. Thus, the recent Greenland research, and the recent carbon emissions research, could be interpreted jointly to mean the following:

18. If the world doesn’t reach a peak in its emissions fast, and then get them going down rapidly, the science suggests we are risking even bigger changes than we’ve seen so far to the Earth’s second biggest ice sheet. /end