It was Darwin’s birthday this week (he was 203 on 12 Feb) and so the fact that my thoughts have been turning in that direction is being reflected in what I have been writing this week.

Today, I’d like to turn away from commenting on the utter insanity of the draft claims made some religious folks concerning evolution, and instead look at a couple of recent discoveries that are quite interesting. 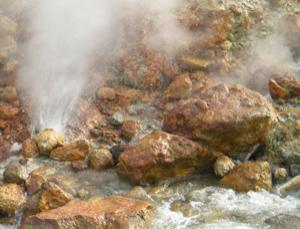 In 1871 Darwin wrote a letter to Joseph Hooker

If you are wondering “who?”, he was Darwin’s closest friend and also one of the greatest British botanists and explorers of the 19th century, famous for venturing as far as both the Antarctic in the 1840s and also the Himalayas in the 1850s.

“It is often said that all the conditions for the first production of a living organism are now present, which could ever have been present. But if (and oh what a big if) we could conceive in some warm little pond with all sorts of ammonia and phosphoric salts, – light, heat, electricity &c. present, that a protein compound was chemically formed, ready to undergo still more complex changes, at the present day such matter wd be instantly devoured, or absorbed, which would not have been the case before living creatures were formed.“

The latest news is that it looks as if Darwin’s speculation may not have been too far off the mark. New Scientist reports (two days ago here) that some new evidence now challenges the widespread view that it all kicked off in the oceans, around deep-sea hydrothermal vents.

Key Point: the debate continues and has not reached a conclusion.

Armen Mulkidjanian at the University of Osnabrück in Germany says there is a fundamental problem with the ocean floor hypothesis: salt. The cytoplasm found inside all cells contains much more potassium than sodium. Mulkidjanian thinks that chemistry reflects the chemistry of the water life first appeared in, yet salty seawater is sodium-rich and potassium-poor.

“The ancient sea contained the wrong balance of sodium and potassium for the origin of cells,” says Mulkidjanian. Now, after extensive field studies, he claims to have found the one place on Earth where that balance is right: in the thermal springs of Kamchatka in far-east Siberia. Mulkidjanian found that puddles condensing from the hydrothermal vapour at Siberia’s Mutnovsky thermal springs are potassium-rich, just like cell cytoplasm (Proceedings of the National Academy of Sciences, DOI: 10.1073.pnas.1117774109). Life first appeared in similar pools, says Mulkidjanian.

And while early life would have been damaged if over-exposed to UVs, Mulkidjanian’s theory solves another puzzle. Most evolutionary biologists agree that life at this stage would have been little more than floating strands of DNA and RNA. The nucleotides that make up DNA and RNA are all surprisingly stable when exposed to UV light, suggesting they evolved in an environment where UV exposure weeded out all but the most photostable molecules. “You don’t get UV light around deep-sea vents,” says Mulkidjanian.

It is not a done deal and others have objections. For example, Nick Lane at University College London disputes the claims that the first cells couldn’t cope with life in sodium-rich water, and Carrine Blank, a geologist at the University of Montana in Missoula says life was unlikely to survive on land 3.8 billion years ago, at a time when meteorites were pummelling Earth, so the debate, as it should, rumbles on and still has some way to go.

If we can come up with a good answer for how and where life started here and under what conditions, then we will know what to look for and where to look for extraterrestrial life.

“A pale blue dot would be an exciting discovery, but one with brown spots would be more encouraging.” 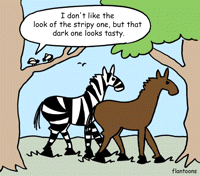 How did the Zebra evolve its stripes?

This second item, unrelated to the one above, concerns the question as to how the Zebra evolved its characteristic black-and-white stripes.

The news is that some researchers from Hungary and Sweden claim to have solved the mystery. They report in the Journal of Experimental Biology that this pattern of narrow stripes makes zebras “unattractive” to the flies.

Horseflies (tabanids) deliver nasty bites, carry disease and distract grazing animals from feeding. According to Horváth, these insects are attracted to horizontally polarized light because reflections from water are horizontally polarized and aquatic insects use this phenomenon to identify stretches of water where they can mate and lay eggs. However, blood-sucking female tabanids are also guided to victims by linearly polarized light reflected from their hides. Explaining that horseflies are more attracted to dark horses than to white horses, the team also points out that developing zebra embryos start out with a dark skin, but go on to develop white stripes before birth. The team wondered whether the zebra’s stripy hide might have evolved to disrupt their attractive dark skins and make them less appealing to voracious bloodsuckers, such as tabanids.

So they went off and started testing to see how fond the little critters were to an assortment of black and white striped patterns. They varied the width, density and angle of the stripes and soon discovered that the zebra’s pattern correlated well with the patterns that were least attractive to horseflies

‘We conclude that zebras have evolved a coat pattern in which the stripes are narrow enough to ensure minimum attractiveness to tabanid flies’, says the team and they add, ‘The selection pressure for striped coat patterns as a response to blood-sucking dipteran parasites is probably high in this region

Sorry, it is not quite as entertaining an explanation as one of Kipling’s, “Just So” stories, but is still very interesting.