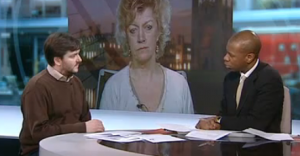 Here is a truly excellent performance by Andrew Copson (Chief Executive of the British Humanist Association), he is to be congratulated for a job well done, he interviews very well and comes across as eloquent, concise and calm.

As for Anne Atkins … “I want to live in a confused mishmash of a society that just about works. We wouldn’t start here, but lets all just muddle through” … sigh, what can I say except, “Yikes!”. She also states that she has no problem with girls going to school in burkas. One other comment from her I found rather odd was the claim that America is “incredibly intolerant” of religion!!! … she has just got to be kidding, the US is stuffed full of religious lunatics, coast to coast, who are highly intolerant of non-belief. As an example, would you ever see an open honest interview like the BBC one below appearing on prime-time US News without some theist taking cheap shots throughout.

Oh and towards the end she indulges herself with an ad hominem attack on Richard Dawkins claiming he was on a militant angry rant when he was present on the BBC 4 Today program with her back in 2006 … you be the judge, here is the actual text from that broadcast by Richard, (and the audio version here) see if you can spot just one word that fits that description. From my viewpoint it is absolutely brilliant and does not have a single jot of “mean”, “aggressive” or “Angry”.

What is also mildly amusing is the manner in which Anne Atkins responds to Andrew, he comes across as such a nice bloke, that by the end of it all she appears to be going almost maternal towards him.

2 thoughts on “BBC News clip : Andrew Copson of the BHA does a great job debunking the militant secularist claim”