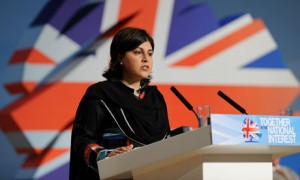 In today’s UK Guardian, the Tory party chairman, Lady Warsi, has issued a warning for what she calls the “militant secularisation” of society and propose Christianity is given a central role in public life.

What the heck is “militant secularisation”, and why or why would you give an irrational belief a seat at the table?

The word “militant” comes from the 15th century Latin “militare” meaning “to serve as a soldier”, and appears to imply violence or perhaps simply aggressive tactics, but lets give her a bit of leeway and assume such rhetoric is simply describing the assertion of a specific position.  If so, then I guess she is instead arguing that we need to retain the status quo and continue to endure under the yoke of  “Militant Christianity”.

It’s a reference of course to the recent High Court ruling where a town council was told that deploying prayer as an official agenda item is illegal. Since she is arguing that religion should not be downgraded in the public sphere, I guess she is arguing that it is just fine to break the law.

Look, I get it … there are folks that believe and there are folks who don’t, and the folks that do are a tad nervous and perhaps increasingly insecure because their ever dwindling numbers are being marginalized.  She might indeed advocate that religion should play a central role in public life, but in a world where very few actually attend any religious service or believe such historical myths, now is the time for us to put such historical toys to one side and start behaving like adults who can think and reason.

She does of course make the usual daft claims … apparently we are “deeply intolerant“, and “demonstrate similar traits to totalitarian regime“. Nope, nobody is dictating except the religious who still insist upon inflicting their superstition by force upon the majority who are not religious. It is of course a rather odd claim when you consider that these are folks who do truly believe in  an imaginary celestial totalitarian regime, and they don’t appear to be very tolerant of people who do not hold that view.

As for the council having prayer as an official agenda item, what are the non-religious councillors supposed to do (or for that matter, how about councillors with other non-christian beliefs)? Should they walk out, or turn up late? Nobody is telling them not to pray or even what to believe, but just to take it off the formal agenda and stop imposing it by force on everybody else. If they really still wish to have a quick chat with their imaginary friend, then they can do so a few minutes prior to the formal start – no big deal.

One further thought, Lady Warsi was also talking about “the positive power of faith in our society“. She makes these grand sweeping claims about all the wonderful benefits that irrational belief brings, but for some mysterious reason, appears to be unable to actually tell us what any of these grand benefits actually are, why is that the case?