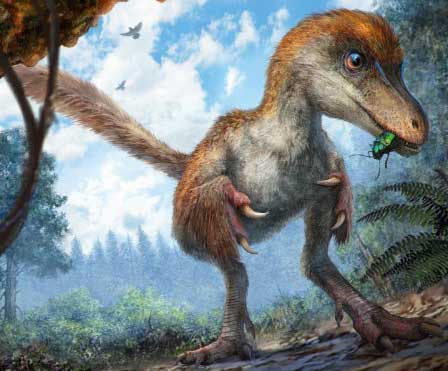 The classical image of dinosaurs that we carry within our heads is that they were scaled up lizards. This is not simply a cultural view, but was the initial scientific one. Back in 1842 paleontologist Richard Owen coined the word dinosaur from Greek as a description of the term “fearsome lizard”. We perhaps still carry that image to some degree because of movies such as Jurassic Park, and yet that is not quite how the subject matter experts now view them. By about the 1990s the evidence was that birds are directly descended from dinosaurs. To put that another way, birds are feathered dinosaurs.

Were all dinosaurs feathered?

Probably not, but we do have fossils that show some did indeed have feathers.

There are a few other popular myths that abound, for example …

This however is not a generic dinosaur posting, and is instead very focused on feathers, so let’s move on to that.

The dinosaur tail preserved in Amber

Roughly about one year ago CNN and also National Geographic ran a great articles about the discovery of a dinosaur tail that had been preserved in amber. About here is the cue for the Jurassic park music because this is starting to feel exactly like the plot. It was found by Lida Xing, a researcher from the China University of Geosciences in Beijing, at an amber market in Myanmar. CNN tells the story as follows …

The remarkable piece was destined to end up as a curiosity or piece of jewelry, with Burmese traders believing a plant fragment was trapped inside.

“I realized that the content was a vertebrate, probably theropod, rather than any plant,” Xing told CNN.

“I was not sure that (the trader) really understood how important this specimen was, but he did not raise the price.”

Here is the sample …

But that’s just a bird and not an actual Dinosaur tail … right?

Actually no, it really is a dinosaur. It’s an obvious thought, so the real question is how do you tell the difference?

Based on the structure of the tail, researchers believe it belongs to a juvenile coelurosaur, part of a group of theropod dinosaurs that includes everything from tyrannosaurs to modern birds.

The presence of articulated tail vertebrae in the sample enabled researchers to rule out the possibility that the feathers belonged to a prehistoric bird. Modern birds and their closest Cretaceous ancestors feature a set of fused tail vertebrae called a pygostyle that enables tail feathers to move as a single unit.

“[A pygostyle] is the sort of thing you’ve seen if you’ve ever prepared a turkey,” says study co-author Ryan McKellar, curator of invertebrate paleontology at Canada’s Royal Saskatchewan Museum.

In other words, its this guy …

Best to dismiss images of T-Rex, this was a tiny sparrow sized dinosaur. Pictured below is Ryan McKellar, curator of invertebrate paleontology at Canada’s Royal Saskatchewan Museum along with Lida Xing, the chap who found it … 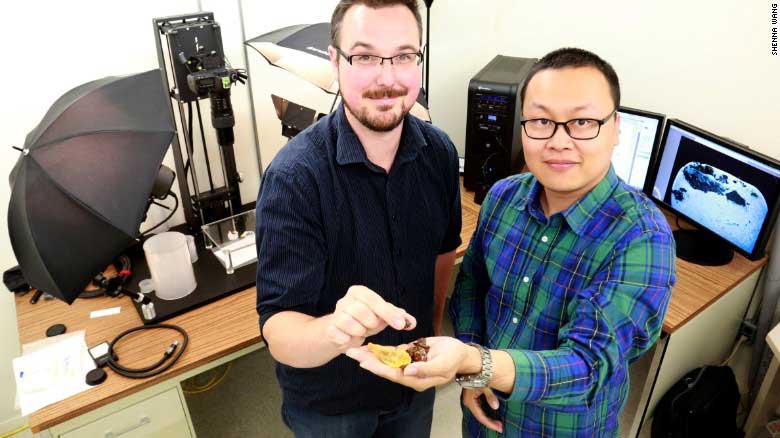 So there you go then … yes, some dinosaurs not only laid eggs and built nests, but also had feathers.

The details of the discovery were written up and then published within the journal Current Biology.

In the two decades since the discovery of feathered dinosaurs, the range of plumage known from non-avialan theropods has expanded significantly, confirming several features predicted by developmentally informed models of feather evolution. However, three-dimensional feather morphology and evolutionary patterns remain difficult to interpret, due to compression in sedimentary rocks. Recent discoveries in Cretaceous amber from Canada, France, Japan, Lebanon, Myanmar, and the United States reveal much finer levels of structural detail, but taxonomic placement is uncertain because plumage is rarely associated with identifiable skeletal material .

Here we describe the feathered tail of a non-avialan theropod preserved in mid-Cretaceous (∼99 Ma) amber from Kachin State, Myanmar, with plumage structure that directly informs the evolutionary developmental pathway of feathers. This specimen provides an opportunity to document pristine feathers in direct association with a putative juvenile coelurosaur, preserving fine morphological details, including the spatial arrangement of follicles and feathers on the body, and micrometer-scale features of the plumage. Many feathers exhibit a short, slender rachis with alternating barbs and a uniform series of contiguous barbules, supporting the developmental hypothesis that barbs already possessed barbules when they fused to form the rachis. Beneath the feathers, carbonized soft tissues offer a glimpse of preservational potential and history for the inclusion; abundant Fe2+ suggests that vestiges of primary hemoglobin and ferritin remain trapped within the tail.

The new finding highlights the unique preservation potential of amber for understanding the morphology and evolution of coelurosaurian integumentary structures.