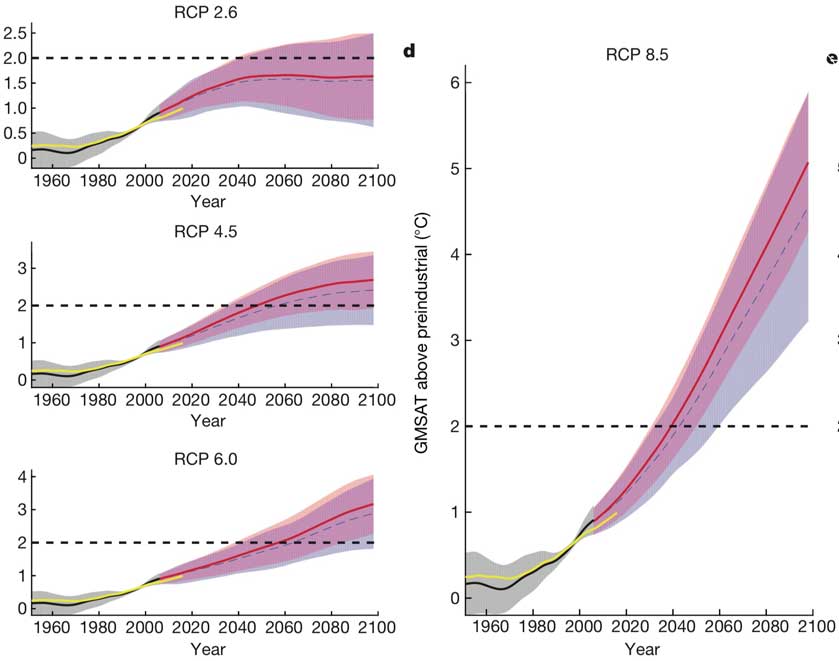 This perhaps is the essence of climate modelling. Observations are made, and slowly slowly you build up a precise mathematical model that can be used to work out what comes next. Within such models you have the various drivers of climate such as atmosphere, oceans, ice, etc, When you have created a model of what is happening, you can then test the robustness of it by starting at a point in the past and then running it forward to now to verify how accurate it is and so actual observations can be used to validate things.

There are of course different approaches to modelling and while some turn out to not be all that good, others are observed to very accurately model the things that we observe. So what happens when we then run the most accurate models forwards, what do we learn?

We have the results of a new study

Patrick Brown and Ken Caldeira of the Carnegie Institution for Science in Stanford, Calif have published the results of their recent study that attempted to answer such a question. Rather obviously they are not the first to do this. The entire point of creating a climate model is to then run it forwards and work out what comes next. As you might perhaps anticipate, taking the projections from a collection of climate models and then combining it all together is rather common, that’s what the IPCC (the UN’s climate panel) does.

This study however does do something new.

There are two things that make the accuracy of climate models potentially uncertain.

To tackle the second, the essence of what they have done is this …

… or to put that another way, let me quote one of the authors of the published paper …

“We know enough about the climate system that it doesn’t necessarily make sense to throw all the models in a pool and say, we’re blind to which models might be good and which might be bad,”

With the title of “Greater future global warming inferred from Earth’s recent energy budget“, you can perhaps now project ahead and see where this is going. It has been published within Nature but unfortunately is blocked by a paywall.

OK, so let’s cut to the chase here, the bottom line of their study is this …

In other words, the models that did the best job of correctly predicting what we can actually observe also predict a greater degree of warming.

This is all part of the on-going conversation

As is highlighted within the Washington Post by Chris Mooney, the response to this has been as follows …

it appears that much of the result had to do with the way different models handled one of the biggest uncertainties in how the planet will respond to climate change.

“This is really about the clouds,” said Michael Winton, a leader in the climate model development team at the Geophysical Fluid Dynamics Laboratory of the National Oceanic and Atmospheric Administration, who discussed the study with The Post but was not involved in the research.

Clouds play a crucial role in the climate because among other roles, their light surfaces reflect incoming solar radiation back out to space. So if clouds change under global warming, that will in turn change the overall climate response.

How clouds might change is quite complex, however, and as the models are unable to fully capture this behavior due to the small scale on which it occurs, the programs instead tend to include statistically based assumptions about the behavior of clouds. This is called “parameterization.”

But researchers aren’t very confident that the parameterizations are right. “So what you’re looking at is, the behavior of what I would say is the weak link in the model,” Winton said.

This is where the Brown and Caldeira study comes in, basically identifying models that, by virtue of this programming or other factors, seem to do a better job of representing the current behavior of clouds. However, Winton and two other scientists consulted by The Post all said that they respected the study’s attempt, but weren’t fully convinced.

It’s an interesting study. When it comes to the conclusion then there are skeptics , but they still welcome this work …

“It’s great that people are doing this well and we should continue to do this kind of work — it’s an important complement to assessments of sensitivity from other methods,” added Gavin Schmidt, who heads NASA’s Goddard Institute for Space Studies. “But we should always remember that it’s the consilience of evidence in such a complex area that usually gives you robust predictions.”

Schmidt noted future models might make this current finding disappear — and also noted the increase in warming in the better models found in the study was relatively small.

If however what this study suggests is eventually accepted as correct, and that has not yet happened, then it will lead to rather a lot of sleepless nights for policymakers because they just potentially had 15% of their potential carbon budget wiped out.