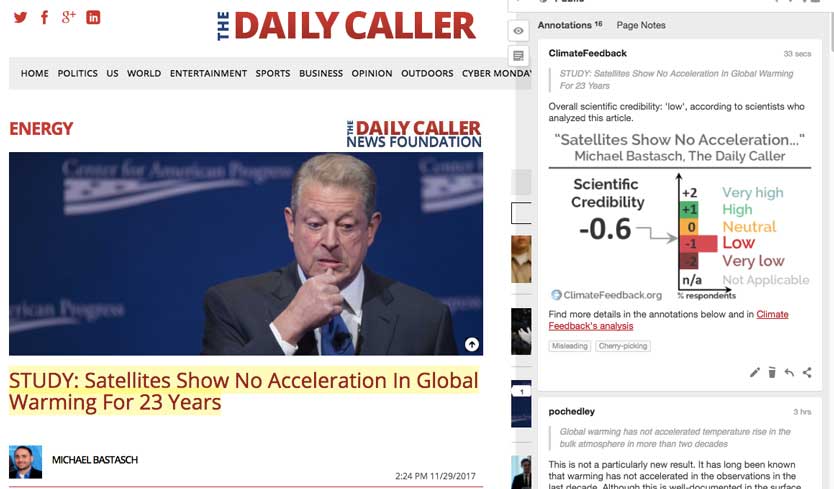 Recently a right-wing Facebook “friend” shared an article from the Daily Caller that claimed that Satellite data showed no acceleration in warming for the past 23 years. Apart from the rather obvious “How did this guy get on my FB friends list?” question, I do actually find it fascinating to observe how such “truth” is circulated.

Anybody sharing anything from the Daily Caller is itself a bit of a red flag because it is not exactly a credible source for anything. While it is a right-wing leaning site, its political stance is not the specific problem. The issue is that it provides amplification and legitimation for the most extreme conspiracy sites, such as Truthfeed, Infowars, Gateway Pundit and Conservative Treehouse. Beyond all that it also provides a platform for the alt-right and white nationalism. It has even recently encouraged violence and hosted articles by Jason Kessler, the white nationalist who organised that now infamous rally in Charlottesville – with all the attention, they ended up purging his articles. Unlike much of the Daily Caller content, I’m not making any of this up, you can easily verify it all yourself.

In response to his posting I commented as follows …

Daily Caller is not exactly a credible source for anything. If you are buying this cool aid then you have a serious information flow problem

In hindsight it might have been wiser to phrase it as a question such as “What leads you the believe that this is a credible source?”, then again you might consider an even wiser response to be one that simply involves me rolling my eyes and not commenting at all.

Love how the left tries to deny facts by attacking the source that is reporting the facts. So somehow you are implying that because this major state university study funded by the DOE is being reported by a news source you don’t like makes it not real. Talk about a person with a serious info flow problem David. Maybe I missed something and you can explain it to me about how the Daily Caller has anything to do with this study other than reporting said study and what makes this study not real.

Serious question, are you interested in knowing what is actually true and factual?

So your answer is No you are to blinded by ideology to separate fact from fiction and that you are incapable of finding out the truth. So typical of the uninformed voter.

This is irony on steroids, he is so deeply embedded inside a right-wing bubble of misinformation that even attempting to begin a meaningful conversation is deflected.

He did not bother replying.

This is one small data point that illustrates a huge issue. The challenge we face is not Trump himself, nor even the GOP machinery that panders to those that support them financially and does not actually represent the best interests of those that voted for them.

We live in an age where the flow of information has greatly accelerated to such a degree that we are forced to select our information sources. This rather naturally results in the creation of information bubbles for many where the only voices they can hear are those that they agree with, and all dissent is filtered out. Within many of these bubbles the information that bounces around is not exactly factual and so when this is embraced both emotionally and also uncritically it becomes a problem. They chap above is a prime example. From his viewpoint any dissent from this party line is deemed to be from those that are “uninformed” or “blinded by ideology”.

There are literally millions like this, and so there rests our real challenge.

Analysis of the Daily Caller article

Let’s move on to that Daily Caller article itself. In general their stance is to oppose climate science and so they will naturally latch on to anything that confirms that. The article itself reports the details of a highly dubious study that has been published within a very obscure journal and misleads by not telling the reader what the full conversation around that article has been, but instead simply presents it as an official DOE funded scientific study. It does hint at the controversy with just one line buried right in the middle that reads “The study is sure to be contentious.“, but then proceeds to parrot the author of the study without reporting any of the criticism that this rather dubious study has received.

Climate Feedback, a network of scientists who collectively assess the credibility of influential climate change media coverage, asked five subject matter experts to review the article. They all hailed it as highly scientific, accurate and very credible …. oh wait, that’s not what happened. Instead this did …

While The Daily Caller story accurately describes the study, it fails to include comments from other scientists in the field or to provide necessary context for readers, as the scientists who reviewed the story explained. For example, the study fails to account for more recent volcanic activity, and does not support its conclusion that climate models are overly sensitive to CO2.

In addition, the story’s headline emphasizes that the study shows “no acceleration in global warming for 23 years” and this is presented as a challenge to model simulations. This is misleading, as no acceleration of the warming rate is expected to be seen in such a short timeframe.

You can also read each of the five independent reviews.

It is really not hard to discover any of this, but unfortunately, when insulated within a self-imposed isolation then the ease of such access is neutralised when faced with an unwillingness to doubt and a refusal to critically analyse existing tribal “truth”.