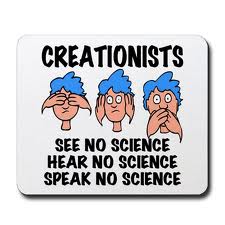 In the middle of an on-line debate a couple of days ago, I made the factual observation that there were zero scientific papers in peer-reviewed scientific journals that supported intelligent design. As a response by a Creationist, I was sent the following “evidence” that is apparently proof that evolution has now been discredited …

The scientific magazine Discover put the situation this way: “Evolution . . . is not only under attack by fundamentalist Christians, but is also being questioned by reputable scientists. Among paleontologists, scientists who study the fossil record, there is growing dissent from the prevailing view of Darwinism.”

Francis Hitching, an evolutionist and author of the book The Neck of the Giraffe, stated: “For all its acceptance in the scientific world as the great unifying principle of biology, Darwinism, after a century and a quarter, is in a surprising amount of trouble.

After an important conference of some 150 specialists in evolution held in Chicago, Illinois, a report concluded: “[Evolution] is undergoing its broadest and deepest revolution in nearly 50 years. . . . Exactly how evolution happened is now a matter of great controversy among biologists. . . . No clear resolution of the controversies was in sight.

Paleontologist Niles Eldredge, a prominent evolutionist, said: “The doubt that has infiltrated the previous, smugly confident certitude of evolutionary biology’s last twenty years has inflamed passions.” He spoke of the “lack of total agreement even within the warring camps,” and added, “things really are in an uproar these days . . . Sometimes it seems as though there are as many variations on each [evolutionary] theme as there are individual biologists.

And Britain’s New Scientist observed that “an increasing number of scientists, most particularly a growing number of evolutionists . . . argue that Darwinian evolutionary theory is no genuine scientific theory at all. . . . Many of the critics have the highest intellectual credentials.

Anybody who is not familiar with the topic would read the above and potentially buy into the thought that perhaps there are serious concerns about evolution. However, its a con job. Let me take you for a quick tour through each of the above in more detail so that you can see what I’m on about.

First we have the apparent quote from Discover that appears to say that reputable scientists no longer accept Evolution. Were these words actually published in Discover magazine? yes they were, and they do indeed appear to be quite damming. But check back to the original and you find they have been pulled out of context to completely twist their meaning. Here is the complete text with just the bits they chose underlined so that you can see what was left out

“Charles Darwin’s brilliant theory of evolution, published in 1859, had a stunning impact on scientific and religious thought and forever changed man’s perception of himself. Now that hallowed theory is not only under attack by fundamentalist Christians, but is also being questioned by reputable scientists. Among paleontologists, scientists who study the fossil record, there is growing dissent from the prevailing view of Darwinism…. Most of the debate will center on one key question: Does the three-billion-year-old process of evolution creep at a steady pace, or is it marked by long periods of inactivity punctuated by short bursts of rapid change? Is Evolution a tortoise or a hare? Darwin’s widely accepted view — that evolution proceeds steadily, at a crawl — favors the tortoise. But two paleontologists, Niles Eldredge of the American Museum of Natural History and Stephen Jay Gould of Harvard, are putting their bets on the hare.” – James Gorman, “The Tortoise or the Hare?”, Discover, October 1980, p. 88

This is not a simple mistake, these creationist deceivers have conducted deliberate fraud and deceit by pulling a few words out of context, it totally changes what was really written. Oh, and take note of the date for this quote, its over 30 years old. Is the rest any better? Lets see.

Next up we have a quote by Francis Hitching from his book. The claim is made that he is an evolutionist and thus implies that he has some scientific credentials and used to believe in Evolution but no longer does, but thats an outright lie. Hitching is basically a sensational TV script writer and has no scientific credentials. In The Neck of the Giraffe he claimed to be a member of the Royal Archaeological Institute, but an inquiry to that institute said he was not. He implied in the “Acknowledgements” of The Neck of the Giraffe that paleontologist Stephen Jay Gould had helped in the writing of the book, but upon inquiry Gould said he did not know him and had no information about him. Hitching also implied that his book had been endorsed by Richard Dawkins, but upon inquiry Dawkins stated: “I know nothing at all about Francis Hitching. If you are uncovering the fact that he is a charlatan, good for you. His book, The Neck of the Giraffe, is one of the silliest and most ignorant I have read for years.“. Still think he might be a credible authority? Well think again, because if you dig even deeper you soon discover that Hitching is a complete kook. He believes in the paranormal and has written on Mayan pyramid energy. The reference work Contemporary Authors, Vol. 103, page 208, lists him as a member of the Society for Psychical Research, the British Society of Dowsers and of the American Society of Dowsers. His writings include: Earth Magic, Dowsing: The Psi Connection. This man is not a credible source for any statements on evolution.

OK, so what’s next? Well, we apparently have a report of some recent conference of 150 specialists who are in controversy over evolution, sounds damming, ah but wait, lets inject a few facts and context here. Its not new, this conference took place over 30 years ago and the quote comes from a New Your Times article published on November 4, 1980. (Once again its very old and not at all new) … and once again they left bits out to twist the meaning, look what happens when I put the missing first sentence back in:

Biology’s understanding of how evolution works, which has long postulated a gradual process of Darwinian natural selection acting on genetic mutations, is undergoing its broadest and deepest revolution in nearly 50 years

In other words, it was deliberately massaged to suggest weakness in the fact of evolution rather than what it was actually talking about, the perceived mechanism.

Now, moving on we get to the Niles Eldredge quote. Its also ancient history and is a carefully selected set of words lifted out of the original context of a 1982 article. Is he truly expressing doubt about evolution? Of course not, the career and writings of Niles Eldredge between 1982 and now prove quite the opposite, he has published more than 160 scientific articles, books, and reviews, and his main professional passion is evolution.

So finally, we get to an apparently anonymous quote from “New Scientist”. Well, thats actually a quote mined out of an article written in New Scientist by Michael Ruse on 25th June 1981 (If curious to see the actual article, click here) Humm, yes its been three decades since this claim was made, so most of those alleged doubting scientists would be dead by now. And yes its “that” Michael Ruse, the philosopher who has been labeled “clueless” by some rather prominent evolutionary biologists (Click here to see that writeup, oh and note thats from last year … I can come up with recent references, not stuff that is over three decades old, and its by a real professor at a real university who is actually a biologist), so while the Ruse quote might have been quote mined, even the original (which does support evolution) can be taken with a lrage grain of salt due to the lack of credibility that Ruse has in this domain.

There is no debate to be had here. Instead, what we find is deliberate fraud, deceit and zero integrity. I believe the correct term is “Liers for Jesus”. There are of course many who honestly believe in Creationism because they have been presented with a lot of apparent proof that discredits scientific fact. Tragically, they are the victims, and have been deceived by this con job. But those who orchestrated this, and have repeatedly had their creationist propaganda debunked, yet still persist in their devotion to distorting the truth, truly are clueless gobshites.

So when faced with the grossly dishonest Creationist claims for which there is not one single jot of evidence, … be extremely skeptical … they will distort the truth, spout lies, and attempt to deceive you.