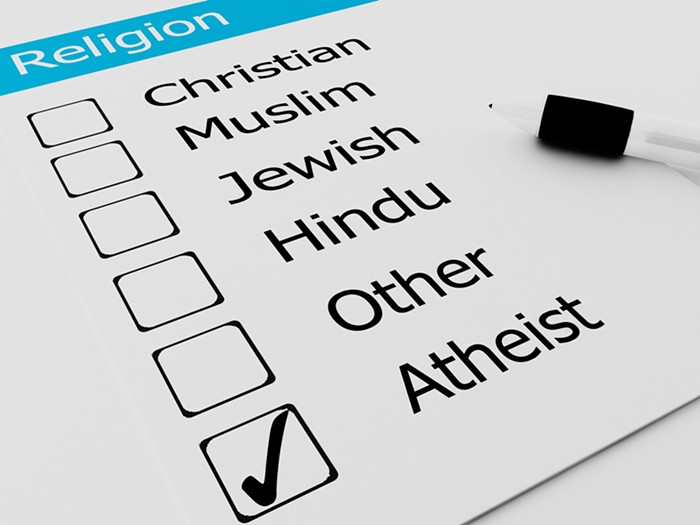 Back in 2017, the Templeton Foundation provided a $2.8 million grant to the University of Kent for a study of non-believers. They are referring not just to atheists, but anybody who does not believe religious claims. The description of the grant is quite bizarre …

The growth of atheism and other forms of ‘unbelief’ in many parts of the world is attracting increasingly wide attention. ….If we are to advance our scientific understanding in these areas, we need to account for the diverse psychological and social phenomena and processes subsumed under these terms. We do not currently know how best to characterize the various forms of unbelief as psychological and sociological phenomena, the extent to which other beliefs – about religion, or the existential – underpin these forms, how diverse they are, and how they vary across demographic groups and cultures. Yet understanding the nature and variety of unbelief is necessary if we are, in future, to answer big questions about the causes of ‘unbelief’ and its effects on such outcomes as personal wellbeing and social cohesion. …

Their stated goal is to strive to “advance our scientific understanding” of people who are not gullible enough to believe religious claims that have zero evidence. Their stated motivation is that not embracing such delusions impacts …”personal wellbeing and social cohesion“.

What would be a far more interesting analysis is to understand why they think believing BS leads to “personal wellbeing and social cohesion“.

They have a report

The news here is that their study has come to a point at which they have published a report (28th May 2019). Here is what they have concluded …

3. Relatively few unbelievers select ‘Atheist’ or ‘Agnostic’ as their preferred (non)religious or secular identity. 38% of American atheists opt for ‘Atheist’, compared to just 19% of Danish atheists. Other well-known labels – ‘humanist’, ‘free thinker’, ‘sceptic’, ‘secular’ – are the go-to identity for only small proportions in each country.

4. Popular assumptions about ‘convinced, dogmatic atheists’ do not stand up to scrutiny. Atheists and agnostics in Brazil and China are less confident that their beliefs about God are correct than are Brazilians and Chinese as a whole. Although American atheists are typically fairly confident in their views about God, importantly, so too are Americans in general.

5. Unbelief in God doesn’t necessarily entail unbelief in other supernatural phenomena. Atheists and (less so) agnostics exhibit lower levels of supernatural belief than do the wider populations. However, only minorities of atheists or agnostics in each of our countries appear to be thorough going naturalists.

6. Another common supposition – that of the purposeless unbeliever, lacking anything to ascribe ultimate meaning to the universe – also does not bear scrutiny. While atheists and agnostics are disproportionately likely to affirm that the universe is ‘ultimately meaningless’ in five of our countries, it still remains a minority view among unbelievers in all six countries.

7. Also perhaps challenging common suppositions: with only a few exceptions, atheists and agnostics endorse the realities of objective moral values, human dignity and attendant rights, and the ‘deep value’ of nature, at similar rates to the general populations in their countries.

8. There is remarkably high agreement between unbelievers and general populations concerning the values most important for ‘finding meaning in the world and your own life’. ‘Family’ and ‘Freedom’ ranked highly for all. Also popular – albeit less unanimously so – were ‘Compassion’, ‘Truth’, ‘Nature’, and ‘Science’.

So basically the $2.8 million bought them a study that states the bleeding obvious – non-believers are a rather diverse lot, and like all humans, find meaning and values. They simply don’t use religion to do so.

Who exactly are the Templeton Foundation?

It is an organisation that was founded to via the wealth of  John Templeton. His desire was to support progress in religious and spiritual knowledge.

What exactly is “spiritual knowledge“?

I have honestly no idea, but looking to see how this works out in practise is quite revealing.

They are not supposed to be political, but they are …

…a number of journalists have highlighted connections with conservative causes…given a significant amount of financial support to groups, causes and individuals considered conservative, including gifts to Gertrude Himmelfarb, Milton Friedman, Walter E. Williams, Julian Lincoln Simon and Mary Lefkowitz, and referred to John Templeton, Jr., as a “conservative sugar daddy”.[17]

They have also funded the pseudo-scientific “Intelligent Design” movement …

In the 1990s, organizations funded by the foundation gave grants for writing books to Guillermo Gonzalez and to William Dembski, who are proponents of intelligent design and who both joined the Discovery Institute after receiving their grants.[2][20] The foundation also gave money directly to the Discovery Institute which in turn passed it through to Baylor University, which used the funds to support Dembski’s salary

The paper, by Robert Brulle of Drexel University, is called “Institutionalizing delay: foundation funding and the creation of U.S. climate change counter-movement organizations.” (If you can’t download it free at the link, judicious inquiry should yield it.) What Brulle did was go through Internal Revenue Service (IRS) records of both private foundations (e.g. Templeton, Lilly Endowment, Inc., etc.) and of organizations engaged in what he calls the “climate change counter-movement,” or CCCM …

Note the $20.2 million dollar investment by the John Templeton Foundation: 4% of total investments in CCCM groups

What happens to this report now?

Present the results to the Vatican.

No, I’m not kidding, they really have just done that.…

The global Understanding Unbelief programme to advance the scientific understanding of atheism and nonreligion will today (28 May) present results from its research at the Vatican in Rome.

Co-hosting the event are the Pontifical Council for Culture – the Vatican department responsible for dialoguing with non-believers – and the Nonreligion and Secularity Research Network, co-founded in 2008 by University of Kent sociologist Dr Lois Lee.

‘Our data directly counter common stereotypes about unbelievers.  A common view of unbelievers is that they lack a sense of objective morality and purpose but possess an arrogant confidence and a very different set of values from the rest of the population. Our representative data across six diverse countries show that none of this is true. In a time when our societies seem to be growing more and more polarized, it has been both interesting and encouraging to see that one of the supposed big divides in human life (believers vs. unbelievers) may not be so big after all.’

If indeed like me you do not embrace religious beliefs as true, then you will no doubt have come across the various religious claims tossed in your direction by the deeply fanatical …

So will this report actually change any of that at all?

Meanwhile, for their next study, can I recommend that Templeton deploy another $2.8 million to do a comprehensive study to work out where bears shit, and to also determine what specific religious belief the pope adheres to.