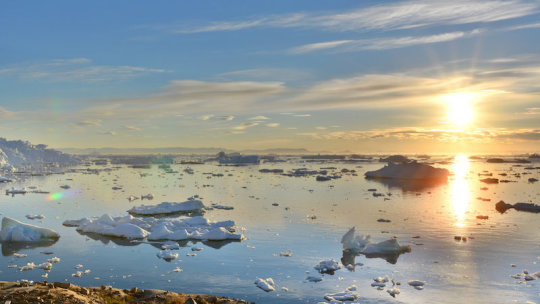 Something odd has been happening with the jet stream, or to be a bit more specific, the polar vortex. This oddness has resulted in weird weather. A new study documents a better understanding of this. Researchers have been able to model how warming in the arctic is the cause.

Atmospheric researchers at the Alfred Wegener Institute, Helmholtz Centre for Polar and Marine Research (AWI) have now developed a climate model that can accurately depict the frequently observed winding course of the jet stream, a major air current over the Northern Hemisphere. The breakthrough came when the scientists combined their global climate model with a new machine learning algorithm on ozone chemistry. Using their new combo-model, they can now show that the jet stream’s wavelike course in winter and subsequent extreme weather conditions cold air outbreaks in Central Europe and North America are the direct result of climate change.

Their findings were released in the Nature online portal Scientific Reports on 28 May 2019.

Study: The role of stratospheric ozone for Arctic-midlatitude linkages

What is going on in the Arctic?

Arctic warming has been more pronounced than warming in midlatitudes in the last decades making this region a hotspot of climate change. Associated with this has been a rapid decline of sea-ice extent and a decrease of its thickness. This Sea-ice retreat allows for an increased transport of heat and momentum from the ocean up to the tropo- and stratosphere by enhanced upward propagation of planetary-scale atmospheric waves. In the upper atmosphere, these waves deposit the momentum transported, disturbing the stratospheric polar vortex, which can lead to a breakdown of this circulation with the potential to also significantly impact the troposphere in mid- to late-winter and early spring.

An accurate representation of stratospheric processes in climate models was needed to improve the understanding of the impact of retreating sea ice on the atmospheric circulation.

What has this study done?

They have now successfully modelled the atmospheric response to a prescribed decline in Arctic sea ice by adding an ozone chemistry module to the model.

We have known that this process has been happening. The challenge is that up until now nobody has successfully modelled what was being observed, and that implied that we did not fully grasp what was going on.

What does this now reveal?

“We’ve developed a machine learning algorithm that allows us to represent the ozone layer as an interactive element in the model, and in so doing, to reflect the interactions from the stratosphere and ozone layer,” says first author and AWI atmospheric researcher Erik Romanowsky. “With the new model system we can now realistically reproduce the observed changes in the jet stream.”

“Our study shows that the changes in the jet stream are at least partly due to the loss of Arctic sea ice. If the ice cover continues to dwindle, we believe that both the frequency and intensity of the extreme weather events previously observed in the middle latitudes will increase,” says Prof Markus Rex, Head of Atmospheric Research at the AWI. “In addition, our findings confirm that the more frequently occurring cold phases in winter in the USA, Europe and Asia are by no means a contradiction to global warming; rather, they are a part of anthropogenic climate change.”

“After the successful use of machine learning in this study, we are now for the first time employing artificial intelligence in climate modelling, helping us arrive at more realistic climate model systems. This holds tremendous potential for future climate models, which we believe will deliver more reliable climate projections and therefore a more robust basis for political decision-making,”