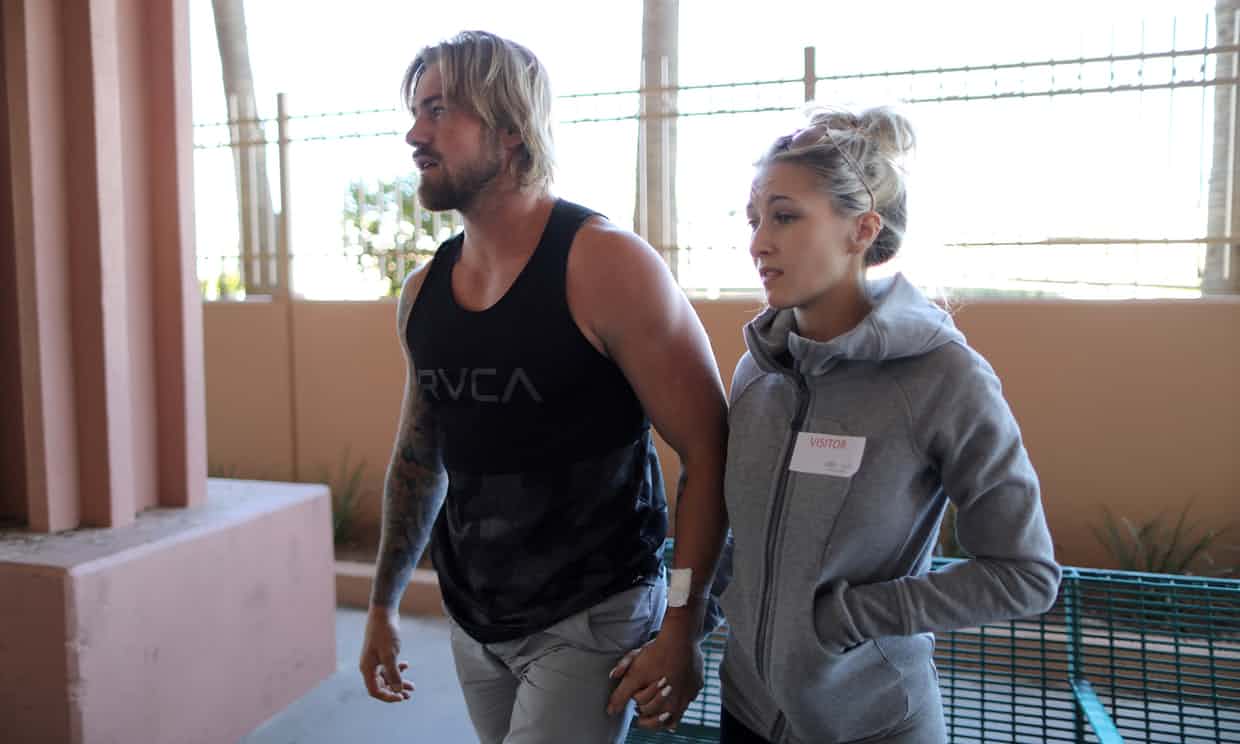 Canadian Braden Matejka narrowly escaped death in the Las Vegas shooting, and so his story along with many others became international news. Here he is briefly telling his story on CBC …

He had a very very lucky escape and narrowly missed death by millimetres. Essentially the bullet grazed his skull. If he had been standing in just a slightly different position at the moment of impact, he would have been one more statistic in this tragic event.

What however comes next is utterly abhorrent.

Many high profile events often result is the emergence of people who promote the idea that it did not actually happen as described, but instead was all staged. In cases such as this the claim is that there are no victims, and that the people they see on the news are paid actors that are part of the government conspiracy.

In an age where people can use social media, such BS not only rapidly gains traction with a larger audience, but it also enables such people to reach out and directly attack the victims of such tragic events …

“You are a lying piece of shit and I hope someone truly shoots you in the head,” a commenter wrote to Matejka on Facebook

“Your soul is disgusting and dark! You will pay for the consequences!” said another. A Facebook meme quickly spread with a photo of him after the shooting, captioned: “I’m a lying cunt!”

The abuse Mr Matejka has faced has not simply been one of two lone cranks, it has been a complete torrent of abuse. There has been so much of it that he has been forced to shutdown all his social media accounts and disappear from the Internet. It has not just been him, all his friends and family have been receiving the same degree of abuse.

“There are all these families dealing with likely the most horrific thing they’ll ever experience, and they are also met with hate and anger and are being attacked online about being a part of some conspiracy,” said Taylor Matejka, Braden’s brother, who shared with the Guardian dozens of screenshots of the abuse. “It’s madness. I can’t imagine the thought process of these people. Do they know that we are actual people?”

… and indeed yes, here are some of those screenshots … 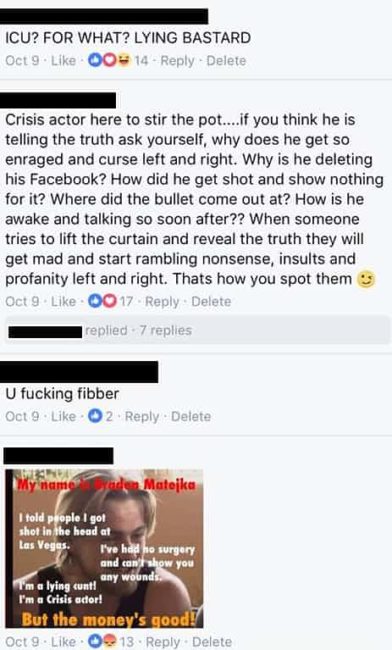 Why is Braden being specifically targeted?

Perhaps because he is an easy target. His brother Taylor and others started a GoFundMe to help raise money for Braden. He has been suffering from bleeding, swelling in his brain, and blurred vision. The GoFundMe perhaps made him easy for the conspiracy theorists to find and so the torrent of abuse is what happened …

Taylor, 28, recalled: “I was just blown away by what these people were saying.”

One woman posted 26 consecutive messages under Taylor’s request for donations for his brother, saying she had been a nurse for more than two decades and that she was certain Braden was a liar and con artist.

At first they tried to engage with these people, but soon discovered that such people had no interest in being reasonable. The only recourse they had was to purge and close their Facebook and Instagram accounts. That in turn simply feeds the delusional frenzy and became yet more “evidence” that they were simply crises actors.

“I’d be happy to talk to these people, but it seems there’s no reasoning. A really sad part of this is that a lot of these people think they’re fighting the good fight and exposing truth.”

This is not just Braden

Mike Cronk, another Las Vegas survivor, was also widely targeted by conspiracy theorists after he did interviews with ABC and NBC news stations. So many users on YouTube have published videos calling him a fake that a search for his name autocompleted to “Mike Cronk crisis actor” and “Mike Cronk fake”. The top three search results for “Mike Cronk Las Vegas” were conspiracy videos, promoted higher than the ABC News segment

McIntosh, Cronk’s friend who is slowly recovering from his bullet wounds, said the websites bore some responsibility. “If they’re putting it online and promoting it, they should be accountable for that. They are providing a service … they need to police it.”

Taylor said he recognized that it was difficult for social media sites to monitor and censor content, but that at the least, they should should prioritize verified news sources above false content: “People should be able to discover the truth first.”

Blaming social media is perhaps an easy answer, and yet there is a good argument that if something is flagged then the social media provider should be forced to respond or face consequences. The individuals who make such false claims should also face consequences – legally the promotion of such claims is libel, yet unless you have deep pockets most can’t afford to go there. Beyond all that, the root cause is not just social media, that simply acts as an amplifier for something that has always been there.

University of Miami political scientists Joseph E. Uscinski and Joseph M. Parent looked into what really goes on inside the heads of people who embrace such ideas. They noted that in laboratory experiments …

In other words, when faced with a high-stress event such as the Las Vegas shooting, people embrace conspiracy beliefs as an attempt to explain it, and so gain some degree of control over the emotional trauma. Because it is embraced at an emotional level, any debunking of the idea at an intellectual level will be ineffective.

When faced with real people who have a story that conflicts with a belief, people opt to retain the absurd conspiracy belief by labelling the victims as crises actors and so they attack them with a sincerity driven by this emotional need they have for an easy answer instead of coming to terms with the reality of the event itself.

Typically a conspiracy theory has four attributes – (1) a group (2) acting in secret (3) to alter institutions, usurp power, hide truth, or gain utility (4) at the expense of the common good. The Las Vegas variation ticks all these boxes.

There is of course a real conspiracy, it is a conspiracy of ignorance amplified by social media.

You really can’t tell people what is and is not actually true, but becoming conscious that we can all slip into such a modality is perhaps the beginning of a road that enables us as individuals to seriously question things that we have previously assumed.

What Should I do?

You can engage in a non-confrontationl and meaningful way. It might indeed be tempting to yell and hurl abuse, and while that might make you feel better, it does not in any way change anything.

What exactly is it that is being promoted. Find out what the claim actually is?

Ask what convinces them that the claim is correct? Explore that by asking questions regarding the reliability of the source. Find out how they actually know what they claim to know.

What you are doing is called Socratic questioning. You are nudging people away from an emotional response and getting them to think critically about things.

For some it can and does help to make a difference.