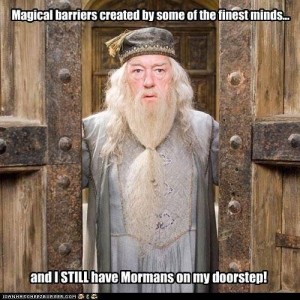 We know that many belief systems make truly weird assertions, but some truly do push the boat far out into uncharted territory. One classic example are the Mormons. You might indeed have the impression that you have a gasp on what they believe, but do you? For example, the following is quite well known:

Well if that was it, they would indeed be on par with most other beliefs, odd indeed, but more or less on par with many other belief systems. But no, they actually hold some wacky beliefs that are truly kooky. Here now is a list of 20 that are often not publicly admitted to. Some of these are doctrinal, others hearsay over the pulpit from apostles or leaders, and others adopted by more orthodox Mormons …

What tends to happen is that potential converts are presented with the more palatable stuff at first. Once you are invested in the basics, then the weirder stuff becomes easier to buy into later on. That perhaps is a pattern most beliefs adopt … give them the easy to digest stuff first to get them hooked, then gradually reel them deeper in.

What is clear is that when it comes to the Mormons, reality is not a local call, but is in fact so far away that international dialing codes kick in.

4 thoughts on “Mormonism: It is weirder than you think.”