Science reports on a truly outrageous example of religious intolerance running rampant in Turkey … intolerance, humm, can you possibly guess which belief system might be involved? 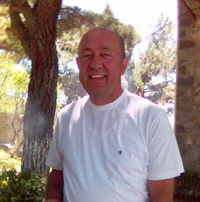 It concerns senior astrophysics professor, Rennan Pekünlü, (pictured), who teaches at Ege University in Izmir. His  vile crime is that he refused to allow women from entering his classroom wearing headscarves (shudders … oh the horror). One of these religious nutters denied entry then responded by filing a complaint alleging that he had unfairly prevented her and other women from entering his classroom. What then happens is utterly crazy, he …

was tried by a local criminal court last year on charges of preventing female students from entering his class wearing headscarves. A ruling handed down on 13 September 2012, found Pekünlü guilty of violating the freedoms and rights of women at the university. The court sentenced him to 25 months of imprisonment. Pekünlü appealed to the Turkish Supreme Court of Appeals, which is expected to issue a final ruling next month.

Let me run that by you once again … he bans students from wearing headscarves in his class and the response is over two years in jail!

Now, lets put a bit of context on all this …

Within this context it becomes quite clear that what has happened here has no legal basis. The good news is that he is not alone, not only has this been published in “Science” but …

A coalition of eight academic and scientific nonprofit organizations in Turkey has issued a joint declaration of support for Pekünlü that accuses the Turkish government of giving the astrophysicist an unjust trial.

A coalition spokesperson, Ferhan Sağin—a professor of medical biochemistry at Ege University—says she and many of her colleagues fear that Pekünlü will suffer the same fate as numerous other critics who oppose the Turkish government’s efforts to promote Islamist ideology in public life, particularly at educational institutions. In June last year, authorities arrested Kemal Gürüz—the former head of Turkey’s Council of Higher Education—who has been a prominent advocate of keeping religion out of public education. Gürüz remains in prison.

The current religious regime in Turkey is dragging Turkey out of its secular roots and back down to the 7th century, a place where one belief demands a uniquely special privilege, and gross intolerance of anything else prevails.

Is this really a nation we want inside the EU? … nope.