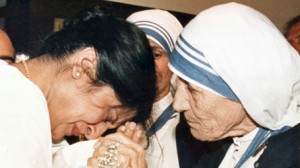 There is a prevailing myth of altruism and generosity that surrounds Mother Teresa. However, a new a paper by Serge Larivée and Genevieve Chenard of University of Montreal’s Department of Psychoeducation and Carole Sénéchal of the University of Ottawa’s Faculty of Education, concludes that her hallowed image was constructed, and that her beatification was orchestrated by an effective media relations campaign. Their analysis has shown that the media image of her does not stand up to any critical analysis of the facts.

The paper will be published in the March issue of the journal Studies in Religion/Sciences religieuses and is an analysis of the published writings about Mother Teresa. Like the journalist and author Christopher Hitchens, who is amply quoted in their analysis, the researchers conclude that her hallowed image—which does not stand up to analysis of the facts—was constructed, and that her beatification was orchestrated by an effective media relations campaign.

“While looking for documentation on the phenomenon of altruism for a seminar on ethics, one of us stumbled upon the life and work of one of Catholic Church’s most celebrated woman and now part of our collective imagination—Mother Teresa—whose real name was Agnes Gonxha,” says Professor Larivée, who led the research. “The description was so ecstatic that it piqued our curiosity and pushed us to research further.”

So what did they actually do?

Three researchers collected 502 documents on the life and work of Mother Teresa. After eliminating 195 duplicates, they consulted 287 documents to conduct their analysis, representing 96% of the literature on the founder of the Order of the Missionaries of Charity (OMC).

Facts that debunked the myth of Mother Teresa.

In their article, Serge Larivée and his colleagues also cite a number of problems not take into account by the Vatican in Mother Teresa’s beatification process, such as “her rather dubious way of caring for the sick, her questionable political contacts, her suspicious management of the enormous sums of money she received, and her overly dogmatic views regarding, in particular, abortion, contraception, and divorce.”

The sick must suffer like Christ on the cross

At the time of her death, Mother Teresa had opened 517 missions welcoming the poor and sick in more than 100 countries. The missions have been described as “homes for the dying” by doctors visiting several of these establishments in Calcutta. Two-thirds of the people coming to these missions hoped to a find a doctor to treat them, while the other third lay dying without receiving appropriate care. The doctors observed a significant lack of hygiene, even unfit conditions, as well as a shortage of actual care, inadequate food, and no painkillers. The problem is not a lack of money—the Foundation created by Mother Teresa has raised hundreds of millions of dollars—but rather a particular conception of suffering and death: “There is something beautiful in seeing the poor accept their lot, to suffer it like Christ’s Passion. The world gains much from their suffering,” was her reply to criticism, cites the journalist Christopher Hitchens. Nevertheless, when Mother Teresa required palliative care, she received it in a modern American hospital.

Mother Teresa was generous with her prayers but rather miserly with her foundation’s millions when it came to humanity’s suffering. During numerous floods in India or following the explosion of a pesticide plant in Bhopal, she offered numerous prayers and medallions of the Virgin Mary but no direct or monetary aid. On the other hand, she had no qualms about accepting the Legion of Honour and a grant from the Duvalier dictatorship in Haiti. Millions of dollars were transferred to the MCO’s various bank accounts, but most of the accounts were kept secret, Larivée says. “Given the parsimonious management of Mother Theresa’s works, one may ask where the millions of dollars for the poorest of the poor have gone?”

The grand media plan for holiness

Despite these disturbing facts, how did Mother Teresa succeed in building an image of holiness and infinite goodness? According to the three researchers, her meeting in London in 1968 with the BBC’s Malcom Muggeridge, an anti-abortion journalist who shared her right-wing Catholic values, was crucial. Muggeridge decided to promote Teresa, who consequently discovered the power of mass media. In 1969, he made a eulogistic film of the missionary, promoting her by attributing to her the “first photographic miracle,” when it should have been attributed to the new film stock being marketed by Kodak. Afterwards, Mother Teresa travelled throughout the world and received numerous awards, including the Nobel Peace Prize. In her acceptance speech, on the subject of Bosnian women who were raped by Serbs and now sought abortion, she said: “I feel the greatest destroyer of peace today is abortion, because it is a direct war, a direct killing—direct murder by the mother herself.”

Following her death, the Vatican decided to waive the usual five-year waiting period to open the beatification process. The miracle attributed to Mother Theresa was the healing of a woman, Monica Besra, who had been suffering from intense abdominal pain. The woman testified that she was cured after a medallion blessed by Mother Theresa was placed on her abdomen. Her doctors thought otherwise: the ovarian cyst and the tuberculosis from which she suffered were healed by the drugs they had given her. The Vatican, nevertheless, concluded that it was a miracle. Mother Teresa’s popularity was such that she had become untouchable for the population, which had already declared her a saint. “What could be better than beatification followed by canonization of this model to revitalize the Church and inspire the faithful especially at a time when churches are empty and the Roman authority is in decline?” Larivée and his colleagues ask.

Despite Mother Teresa’s dubious way of caring for the sick by glorifying their suffering instead of relieving it, Serge Larivée and his colleagues point out the positive effect of the Mother Teresa myth:

“If the extraordinary image of Mother Teresa conveyed in the collective imagination has encouraged humanitarian initiatives that are genuinely engaged with those crushed by poverty, we can only rejoice. It is likely that she has inspired many humanitarian workers whose actions have truly relieved the suffering of the destitute and addressed the causes of poverty and isolation without being extolled by the media. Nevertheless, the media coverage of Mother Theresa could have been a little more rigorous.”

In the end, what was actually going on with Mother Teresa is now quite clear, the money was used to setup a string of missions in her name for the promotion of her fanatical and rather bizarre beliefs. Many donated in the belief that the money was to be used for helping the poor; they had believed the prevailing personality myth and did not appreciate that the funds would do no such thing and would instead be utilized for purely religious fanaticism … by any definition, that deception is summed up with one simple word … “fraud”.

The impact of Mother Teresa’s work has no religious or geographical boundaries. In the four parts of this text, we try to understand this phenomenon. We first present the method used to collect the available information and then discuss a few biographical considerations to clarify her mission and the media’s contribution to her popularity. The third part identifies four stumbling blocks on her way to canonization: her rather dogmatic religious views, her way of caring for the sick, her political choices, and her suspicious management of funds that she received. Fourth, we discuss some elements of her life related to beatification, including her “night of faith,” the exorcism to which she was subjected as well as the validity of the miracle attributed to her.

In conclusion, we question why the criticism of which she has been the target has been ignored by the Vatican.