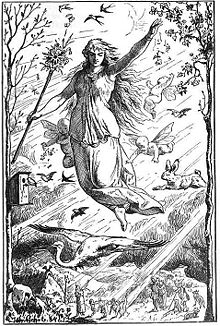 Yep, its that time of year again folks …

Once upon a time long long ago … there existed a magical garden that had been created by a supernatural entity, and into this garden it put the first man and first woman that ever lived. Sadly the woman was tricked by a talking snake into eating some fruit, and so the magical super-entity became angry and tossed the pair out.

The magical super-entity decided to sort all this out once and for all, so it impregnated itself into a human woman and was born human. Its goal was to simply kill itself as a human sacrifice to itself to appease its own anger towards all of us simply because this first ancestor had been swindled by the talking snake.

If I submitted the above to a modern publisher of children’s stories, I’d be laughed out of the office … yet we are all asked to accept this as the deepest of deep truths, so deep in fact we should not question it, nor criticize or mock it in any way. I was told the other day that I’m apparently “shallow” on the basis that I don’t accept this, so if you also don’t accept it, then I guess we are in the same shallow category together.

To be totally honest, it is indeed deep … deeply stupid and utterly insane.

Now lets put this in its proper context. Our ancestors struggled to make sense of the world, and as part of that process, they crafted poetical myths to try and make sense of the world around them, so we can applaud their efforts, and also admire the poetry of such stories which are early attempts to arrive at an understanding; my criticism is not aimed in their direction. Today we have better explanations, yet for some bizarre reason many prefer to embrace these  older  myths as the best answer – that’s the insanity here.

Now, just to make all this a bit more interesting …

It goes without question that all modern believers would dismiss the pagan symbols and beliefs as superstitious nonsense and would simply identify all such associations as historical baggage that now has no meaning … but then should they not also consider their beliefs to be the same, surely the belief that a supernatural deity giving birth to itself so that it could kill itself as a sacrifice to itself falls into the same category?

I do indeed think so … and so should you.

1 thought on “Once upon a time long long ago …”