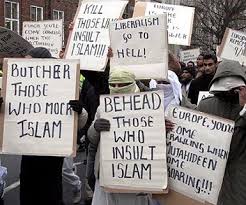 Adam Walker, Spokesperson of the London based Ahmadiyya Muslim Youth Association, has written an article in the Independent entitled “Are peaceful Muslims in denial about their religion?“, and there he makes a case for the Quran being fundamentally a non-violent text. Such a stance is of course to be applauded … oh but wait, there is a bit of a problem here, the issue we face is that the approach he takes is one that adds to the underlying problem that Islam faces and does not actually address the root cause at all.

OK, so when faced with a text that contains verses such as the following, then how does one take a non-violence stance?

Sura (48:29) – Muhammad is the messenger of Allah. And those with him are hard (ruthless) against the disbelievers and merciful among themselves

Sura (9:123) – O you who believe! Fight those of the unbelievers who are near to you and let them find in you hardness

There is sadly rather a lot more like the above, so when faced with the above quotes, Mr Walker takes the following line …

For the curious the actual Quran reference there is 3:7 and reads as follows …

He it is Who has revealed the Book to you; some of its verses are decisive, they are the basis of the Book, and others are allegorical; then as for those in whose hearts there is perversity they follow the part of it which is allegorical, seeking to mislead and seeking to give it (their own) interpretation. but none knows its interpretation except Allah, and those who are firmly rooted in knowledge say: We believe in it, it is all from our Lord; and none do mind except those having understanding.

… and he then in essence proceeds to use this verse to assert that the violent nasty bits can be discarded and only the nice surgery bits are to be read as literal truth?

It should do, because that is what most religious people do what faced with some of the numerous rather embarrassing quotes within whatever holy book they embrace. For example, the bible is very much a pro-slavery book from cover to cover and even contains explicit instructions on how to correctly beat your slave (yes really, apparently it is fine as long as your slave does not die after the beating). Oh but wait, apparently that no longer applies because that was the Old Testament. The New Testament, the bit in which we find “Slaves Obey your Masters”, is now the bit to follow. Oh but wait, that last quote really means … well you get the idea, and so that is how it all plays out, everybody picks the bits they like and will rationalise the rest away.

This is exactly what Mr Walker is doing here. He points out that the Quran says some bits are literal and some bit are not and then happily declares the violent bits to not be literal.

Welcome to “Belief 101” because this is were we discover that each and every single variation of all beliefs will of course assert that their specific interpretation is the right one, and that every other alternative is wrong, hence “they” (which means basically anybody who is not them) is wrong and is a false believer and deserves whatever punishment that the deity of choice has lined up (according to their specific selection).

Mr Walker is a member of a specific variation of Islam, the Ahmadiyya community, and they are wholly and completely committed to the idea of complete non-violence.

That stance is to be applauded.

Sadly, this community is tiny and does not even represent 1% of all the Muslims on the planet today. As for all the other Muslims, well they consider the Ahmadiyya to be heretics, infidels, and not real Muslims at all, so much so that they have been subjected to various forms of religious persecution and discrimination since the movement’s inception in 1889, so any stance they take on any topic will be instantly dismissed by the vast bulk of the Muslim community because it is coming from those they perceive to be non-Muslim.

There is an ever deeper problem here

… and then the dividing line between the literal and the allegorical mysteriously turns out to be a precise echo of whatever agenda is currently on the table, and so you can happily take this approach and justify almost anything at all.

There needs to be a recognition that the book is just that … a book …  and that it not only contains some guidance, but also contains stuff that is complete and utter bullshit.

Would any Muslim ever find such a thought palatable, surely they would be hostile to such an approach?

Well it turns out that most already do take this exact stance, they simply don’t realise that they do. The cosmology contained within the Quran from cover to cover is a primitive 7th century flat-earth cosmology. When faced with the rather stark reality that the earth is not flat, the vast majority of Muslims quite rightly reject that 7th century flat-earth cosmology as bullshit, and happily ignore it because it is clearly wrong.

Does everybody reject the flat-earth cosmology?

Nope, and so the idea that the book is divine and hence always right is the core idea that needs to face robust criticism, especially when the alternative leads not just to violence, intolerance, misogyney, homophobia and murder, but to a complete denial of reality like this … (“Evidence that the Earth is Standing Still”, Islamic University of Medina, Saudi Arabia. First edition, p. 23.) … 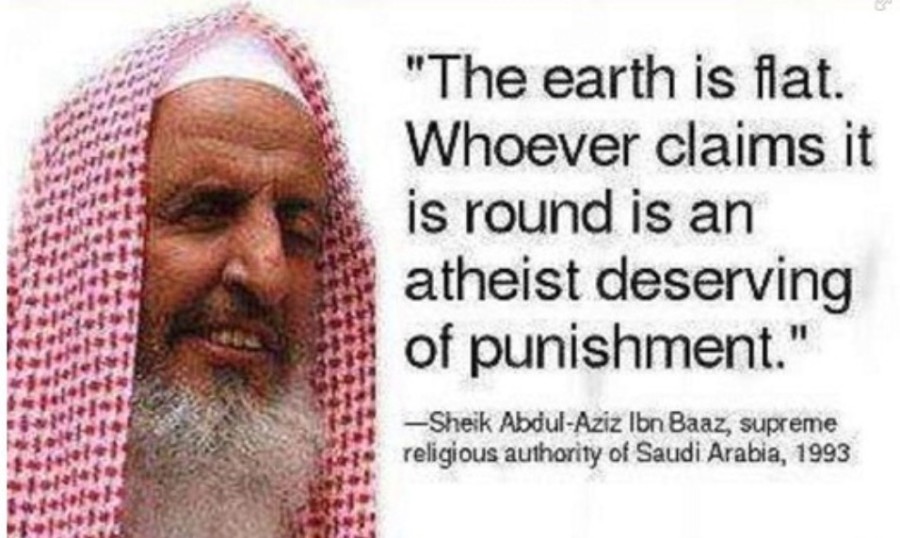 2 thoughts on “Responding to Islamic Violence – Which Interpretation of the Quran is the right one?”