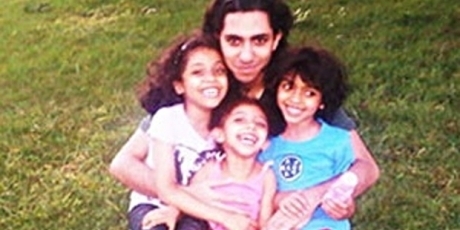 Ensaf Haidar, wife of Raif Badawi above, has a petition for you to sign …

His hands and feet in shackles, his face contorted with pain, for everyone to see. It’s unbearable to think this is how they publicly flogged my husband, 50 times over. Now I hear he could even be executed — but you can help me save him!

My name is Ensaf Haidar and Raif is my husband. Last year, he was sentenced to 10 years in jail and 1.000 lashes for “insulting Islam” — his crime was that he voiced his opinion on a blog. Raif is peaceful man and a loving father — our three children and I miss him dearly and we fear for his life.

Now Germany could help us free him: in 48 hours, Sigmar Gabriel, Germany’s Minister of Economic Affairs, will travel to Saudi Arabia — and if he uses his influence to take a stand for Raif, he could spur Saudi leaders to reconsider.

I have personally asked Sigmar Gabriel for help. But my voice alone is not strong enough. That’s why I ask you to support my appeal so that we can see him off with a huge call from around the world to negotiate Raif’s release. Please join me now and share this with everyone you know.

A few years ago, my husband Raif Badawi started a blog called “Free Saudi Liberals”. He wanted to write about politics and religion, and address social and political issues. But the Saudi judiciary accused him of insulting Islam — a charge that carries harsh punishments. And Raif’s penalty doesn’t only affect him: his public lashing sends a warning signal to anyone wanting to express similar thoughts.

Raif and I met 15 years ago. We married two years later and soon after I was already pregnant with my first child. When my husband got into trouble with the authorities in 2008, he asked us to flee the country: we travelled from Egypt to Lebanon and finally arrived in Canada, where my children and I were granted asylum. But now we can’t just sit here and watch — we want Raif to come back to us!

Many people in my country want reform and international attention to Raif’s plight is rising. Sigmar Gabriel has already said he’ll address human rights during his visit. Please add your voice to my plea — our appeal now could set my husband free.

The petition is an Avaaz campaign. If you are wondering who or what Avaaz is, then here are a few facts about them …

It is worth hooking in and being part of it all, because your voice, when combined with millions of others can make a real difference.

“We have no ideology per se. Our mission is to close the gap between the world we have and the world most people everywhere want. Idealists of the world unite!” – Director Ricken Patel

3 thoughts on “Ensaf Haidar, wife of Raif Badawi has a petition for you to sign – #FreeRaif”