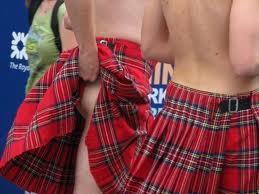 The “No true Scotsman” ploy is an informal fallacy that is commonly deployed in order to maintain a specific position.

Who first pointed out that “no true scotsman” was a fallacy?

It comes from a book by well-known philosopher, Antony Flew “Thinking About Thinking: Do I Sincerely Want to Be Right?” (1975). There he writes …

Imagine Hamish McDonald, a Scotsman, sitting down with his Glasgow Morning Herald and seeing an article about how the “Brighton [(England)] Sex Maniac Strikes Again”. Hamish is shocked and declares that “No Scotsman would do such a thing”. The next day he sits down to read his Glasgow Morning Herald again; and, this time, finds an article about an Aberdeen [(Scotland)] man whose brutal actions make the Brighton sex maniac seem almost gentlemanly. This fact shows that Hamish was wrong in his opinion but is he going to admit this? Not likely. This time he says, “No true Scotsman would do such a thing”

Oh yes, I remember Mr Flew, he was the famous atheist who converted, so clearly he was never a real Atheist. :-)

Actually the real story there is rather more complex and sad, basically some christians hijacked him and his book and inserted “god did it” claims into it. He was quite frankly too elderly and so they essentially railroaded him, but that’s a story for another day.

So why is this the fallacy of the week?

Basically because we are now seeing a slew of Muslim condemnations of the extremist Islamic State of Iraq and Syria (ISIS) assuring us that “they” are not true Muslims.

This is welcomed by many, but is also problematic.

James Brandon, an associate fellow at the International Centre for the Study of Radicalisation and Political Violence (ICSR), quite rightly points this out and explains what the problem is …

Just as non-Muslims who try to tackle Islamism through defining moderate interpretations of Islam as the sole ‘true Islam’ actually undermine liberal Muslim attempts to develop a pluralist understanding of religion, so moderate Muslims’ use of takfir – the process of denouncing rival Muslims as apostates or non-Muslims – reinforces the ideological underpinnings of the very movements they are seeking to tackle.

Takfirism is the root and enabler of all modern jihadism; takfirist doctrine enables any ‘true’ Muslim to label those with a rival interpretation of Islam as no longer Muslim.

This, combined with traditional Islamic jurisprudence that mandates death for apostates, is taken by jihadists as an open license to denounce and then kill their enemies.

When moderate Muslim groups use takfirism to tackle extremism, this dangerous and intrinsically intolerant doctrine is therefore not challenged but is instead reaffirmed. Illustrating this, one British fighter in Syria, explaining why he regarded the MCB as his enemies, said: ‘The Muslim Council of Britain, they are apostates, they are not Muslims”, ironically the same argument that the MCB itself makes against ISIS.

OK, so if that is true, then what should moderate believers be doing?

A better approach is to accept that Islamist extremists, however distasteful their view of Islam, remain Muslims, however much other Muslims, and non-Muslims, might dislike their version of Islam.

Traditionally, as long as a Muslim accepted the existence of a single God and that Mohammed was his final prophet, then he/she was a Muslim. Ironically, a return to this age-old ‘big tent’ approach – that both jihadists and ‘moderates’ are now trying to hastily jettison – is arguably a better way to tackle extremism than seeking to ‘takfir the takfiris’.

And also, he goes on to expand upon this as follows …

A further problem with the ‘jihadists are not Muslims’ argument is that when mainstream Muslims deny that extremists are also Muslims, extremist arguments are not engaged with but are instead left to fester.

Take, for example, militants’ fondness for beheading captives; jihadists typically justify this practice through referencing the Quranic verse 47:4 ‘when you meet those who disbelieve, strike at their necks’ (and variants of this, according to different translations), often supported by many centuries of warlike, and literally medieval, interpretations.

Rather than seeking to effectively re-contextualise and de-fang this verse for the modern era, a blunt rejection of those who cite it as non-Muslims removes all scope for critically engaging – and dismantling – their arguments. This ostrich approach that extremists’ actions ‘have nothing to do with Islam’ not only fails to recognise how deep-rooted some hardline jihadist interpretations are, but it also effectively cedes such key theological battlefields to the extremists.

Is this a valid argument?

Yes it is and you can verify it yourself …

You simply cannot address such issues by pretending they are not what they actually are.

It also lends rather a lot of unintended credence to the popular conspiracy theory that ISIS are a US Army / Zionist / CIA / Illuminate (pick your favourite) plot.