Who inspired you and in what way did they inspire you?

The young look to the older generation for potential role models, and will strive to please by following the same patterns. Ideas and beliefs get passed on and so those who embrace a specific belief in hatred tend to pass that on to the next generation.

This is not about reason or rationality, but rather is more akin to the imprinting of a pattern upon a blank slate.

We not only learn who to love, but we also learn who to hate for no reason other than it is the tradition to hate “them” 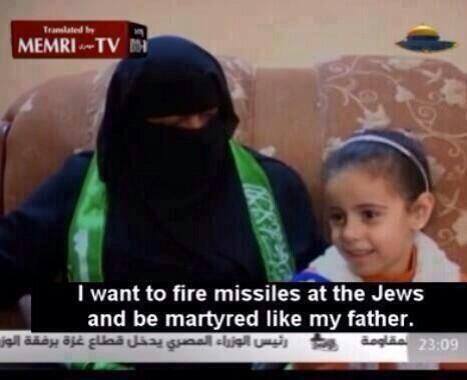 The picture below is very obviously posed, and we all know that she has no real idea of the significance of these symbols. One is a religious covering that tells her that she must submit to the men in her life, that they are in charge, and that she will never be their equal or better. The other is a symbol of power that demands that the belief must be imposed by force upon all around. 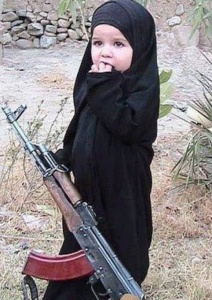 Below it is just a game, except the gun is real, and one day soon it will cease being just a bit of fun. 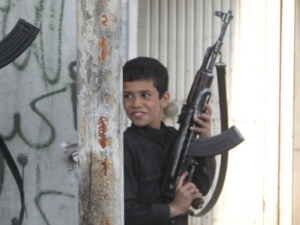 Ah but that is there, they are the products of their tragic environment, over here we don’t have stuff like this happening.

Sadly that is not true.

Meet a nice little boy born and educated in Britain, spewing a poem of hatred called “Kuffars In The Grave”.

Does he truly burn with such hatred? Not yet, but he is learning.

Just imagine what would happen if some non-Muslim child posted a clip about wiping out all the Muslims. Our politeness and also our wish to avoid being labelled a racist prevents us from saying anything about such rhetoric from a Muslim, and yet that silence itself has a consequence – this is not acceptable.

This problem is not just “there”, it is also here as well and is happening inside the house just down the street.

Tragically, some young British Muslims have been abandoning their X-Box war games and flocking off to Syria to take part in a real war. They did not suddenly decide to pop hatred on the agenda, but rather it is the consequence of the emotive traditional rhetoric that has been drilled into them by their parents who did not grasp the consequences of doing so until it was too late. Suddenly a day comes when, to the great distress of the parents, they discover that their child has embraced the dogma as literal truth and has fled to the fields of slaughter, perhaps never to return.

Not all such stories end like that, and there rests hope, because others do find different influences and better role models. Even those immersed in dogma and hatred can and do break free and find a better way.

Zak Ebrahim, the son of the WTC bomber, tells his story about how he escaped …

A single conversation with his mother was the nexus of a turning point for Ebrahim. One day, when spending time with his mother, Ebrahim says, “My mother looked at me with the weary eyes of someone who had experienced enough dogmatism to last a lifetime and said, ‘I’m tired of hating people.’ I realized how much negative energy it takes to hold that hatred inside of you,” he said. He wanted this to end.

… and so it is wholly appropriate that Mr Ebrahim should have the last word here, because he did indeed find a better way, he found freedom from the bondage of religiously induced hatred.

“perhaps someone someday who is compelled to use violence may hear my words and my story and realize that there is a better way; so that I can show people that even though I’d been subjected to this violent, intolerant ideology, I did not become fanaticized. That if I can choose a better path, then anyone can. I choose to use my experience to fight back against terrorism, against bigotry. I do it for the victims of terrorism and their loved ones, for the terrible pain and loss that terrorism has forced upon their lives. For the victims of terrorism, I will speak out against these senseless acts and condemn my father’s actions.

And with that simple fact, I stand here as proof that violence is not inherent in one’s religion or race.” – Zak Ebrahim