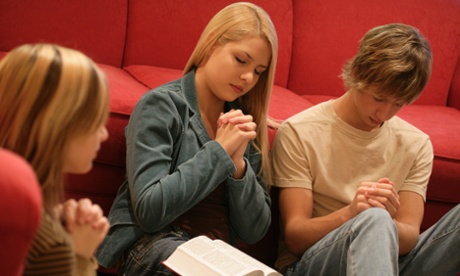 EA Hanks, a writer based in Los Angeles, has written a very personal article in the Guardian that takes us on her journey from Fundamentalist born again Christian to atheist.

In it we find two rather common answers to some truly fascinating questions.

To look into these, I’ll pluck out a few bits from her article, and perhaps by doing so, will also encourage you to read it all (IMHO it’s worth it if you do).

So why did she convert to being “born again”?

The embrace of a specific belief has rather a lot of do with your geographical location, and nothing at all to do with what is and is not actually true. It is those around you that draw you in. Is her story different? Nope, it follows this pattern …

My own journey as a born again Christian began with my troubled mother, who had converted as part of her struggle for sobriety. Where she went, I followed, whether it was to Alcoholics Anonymous, Narcotics Anonymous or into the bosom of the Holy Spirit. As a 10-year-old, A Time to Cherish spoke to me deeply as about the struggle of trying to lead a “Christ First” life in a “Satan Based” world. I wanted to be Christy, and I wanted a boyfriend like hers, the dreamy Todd.

The phrase “a time to cherish” that she refers to above is a book that is designed to instil a specific evangelical belief into teens, and sure enough it worked quite well. If still not sure, well I guess you can think of it as Christian teen porn that is designed to gently tickle the mind. Books do not simply relay facts, but rather they take us on an emotional journey, and so a 10 year old girl diving into one designed to ensnare her into a belief can be a highly effective hook, especially if everybody around you is telling you that it is true.

To be born again is not the same thing as just being Christian: it is a binding contract in which you take Jesus as your “personal Lord and Savior”, a vague term that means that you ask Jesus for guidance in the most mundane of matters. If it’s God’s will, Jesus will grant your prayer – big or small – and each prayer granted is a miracle; divine proof of God’s majesty and truth.

Christy sees the Lord’s hand in small things, too – like when a perky helper on a jet ski arrives to help when Todd, Christy and her disbelieving aunt are stranded on a boat with an empty gas tank. The two believers thank the Lord for her arrival, to which their good Samaritan responds that she is also Born Again and adds, “I actually came to this part of the lake because something inside of me kept nudging me to go this way!” Christy sees the hand of the Holy Spirit because, when you’re born again, you witness miracles every day.

OK, let me explain what is happening here by telling you a quick story. Derren Brown, the illusionist, did a series on Channel 4 in the UK called Fear and Faith. During this at one point he gave somebody a camera to record a video diary and told her that for the next two weeks they would be manipulating events in her life so that she could learn life lessons, and that she was to record those lessons on her video diary. Darren Brown is well-known for doing the hidden camera thing and so this idea, once planted, was embraced as factual. One week later she had a video crammed full of the lessons she had learned during the events that they had staged. The reveal was that they had done nothing at all except give her the idea and a camera – everything that happened was her reading meaning into random events. – This is exactly the same psychology at play in the “born again” experience where Jesus is with you and helps you out each day.

If you would like to see this specific psychology being illustrated by Derren Brown, you will find it in the following clip at about 34 minutes in …

So how did she escape from this psychological trap?

She read the bible and found out what it actually said …

It was reading the Bible that killed off my faith. When I was 13, I decided that I was done being a dilettante – I read my own pink, dog-eared Bible cover-to-cover instead of sticking to the sections suggested by children’s guides to the Gospels. Rather than finding the Good Book a useful, affirming guide, it only raised frustrating questions. I was horrified by the violence and jealousy of the God of the Old Testament, but my mother assured me that our God, the God of the New Testament, was generous, loving and forgiving.

All I could think was: “God changes?”

Indeed yes, if you read the book you quite quickly discover the horrifying truth that (as articulated quite well by RD in “The God Delusion”) “The God of the Old Testament is arguably the most unpleasant character in all fiction: jealous and proud of it; a petty, unjust, unforgiving control-freak; a vindictive, bloodthirsty ethnic cleanser; a misogynistic, homophobic, racist, infanticidal, genocidal, filicidal, pestilential, megalomaniacal, sadomasochistic, capriciously malevolent bully.”

In other words, the god that people believe in today is not the one in the bible at all, but is instead a sugar coated modern variation that is socially acceptable within our modern culture, and so once you read the bible with an open mind you soon discover the huge disconnect between the belief and the book.

Ms Hanks has made a journey that has taken her from a world of miracles into a world of wonder, and if curious about her specific journey, then you can read her story here.