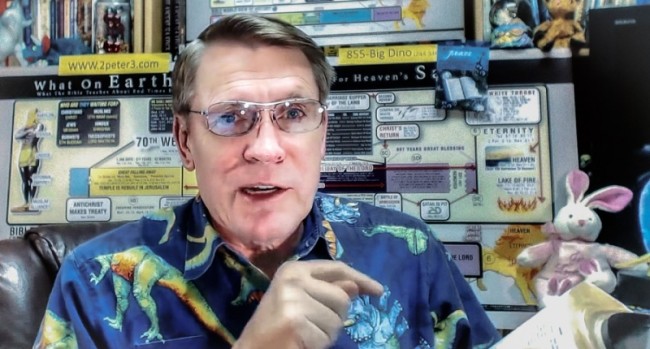 I am at times often tempted to think that no well-educated individual could possibly be truly daft, and yet I do also need to come to terms with the reality that we live in a world peopled with some who are quite determined to prove me quite wrong about that, and I have too admit many do indeed do just that. One recent example that blew me away was Kent Hovind’s recent explanation for bible contradictions.

What follows is not just a quote-mined extract, but rather is his entire official 30 min Q&A YouTube clip that he posted on 28th December. He starts with a polite thanks regarding a recent visit to a Church, then moves on to answering questions that have been sent in.

First Jaw-Dropping moment – Some still believe this guy to be a credible source for anything? (If you know about the history this guy has then you will understand that astonishment)

The magic moment comes at about 5 minutes in where he is asked about contradictions in the bible. The gem itself comes at 07:22 …

“Well if I was God, I would write the book in such a way that those who don’t want to believe in me anyway, would think they have found something anyway, ‘ah ha, that is why I don’t believe’, and then they could, you know, go on with their own life, so I would put things in there that appear to be, without digging, to be contradictions. I don’t think that is deceptive, I think that is wise for the heavenly father to weed out those who are really serious. I made a decision years ago to believe the bible until it is proven wrong. I know others who have decided ‘I’m not going to believe it until you have proven everything right'”

Yep, apparently God lied on purpose, but that’s OK, because Mr Hovind will believe it anyway. Can anybody remind me again who in the bible is supposed to be the father of lies? (Hint: John 8:44)

Least you doubt, here is the man himself saying those precise words …

Does this Methodology of believing until disproven work for anything?

Think of it this way; I assert that each night invisible magic pink unicorns dance outside your house and until you can prove that wrong then you should believe it to be “truth”. In fact you can insert any claim you like for anything at all, and discover that until you can prove it your claim will be dismissed, and so the moment you flip that to acceptance until it has been disproven is the moment when you will be embracing some really weird ideas.

Kent is not unique and is in so many ways being distinctly human. We don’t all test everything and demand evidence for everything, but instead we use shortcuts, one of which is to basically crowdsource fact from fiction. If something is popular, socially acceptable, and regarded as truth by everybody around us, then we often tend to flow with the tide and adopt the same position. The problem we then face is that once we have invested emotionally in something that is  contradicted by itself or by reality, then we proceed to rationalise so that we can protect that emotional investment.

Kent has invested his entire life in his specific variation of belief so it would be very challenging for him to come to terms with it not actually being true.

A bit more about Kent Hovind

You might not be familiar with Mr Hovind and so if curious to see just how disconnected some can become from reality, then browsing his Wikipedia is perhaps worth a visit.

There you would perhaps be shocked to learn that this good upright citizen who claims the high-moral ground because he has Jesus, has in fact been in jail since 2006 for refusing to pay his income tax, and was released to home confinement since July of 2015. In his defence, he claimed that he did not recognise the governments right to try him for tax fraud. It is sad that if he had in fact tried to cooperate with the authorities, he might never have gone to jail, but instead maintained a belligerent attitude that demonstrated a complete disconnect with what was going on.

I suspect that same disconnect is being maintained and that both he and his followers perhaps view all this as the devil attempting to silence the word of God, and simply do not see that he was himself the entire architect and instrument of it all. He was indicted on 58 counts and was found guilty of the lot, not because of an opinion, nor because he was being persecuted, but rather because the IRS presented a clear concise evidence-based case.

People can and should be free to believe whatever they wish, but in the end reality will come knocking, and so it is perhaps wise to strive to believe as many true things as possible and to be prepared to change our minds when new evidence arises.

In many ways I sympathise to some degree because I personally spent rather a long time, perhaps too much time, ensnared by ideas and beliefs that I was quite sure were both true and factual, and so I needed to eventually come to terms over quite a bit of time that none of it had any real evidence.

It can perhaps be argued that the three most difficult words to come to terms with are “I was wrong“, and that is perhaps because we deeply embrace many ideas,  not at an intellectual level, but at an emotional level. If you are not sure about that, then count all the discussions you have been part of on FB where somebody has said “OK, you have convinced me, I’ve changed my mind“, and ask yourself if you able to use more than one hand to count all those?