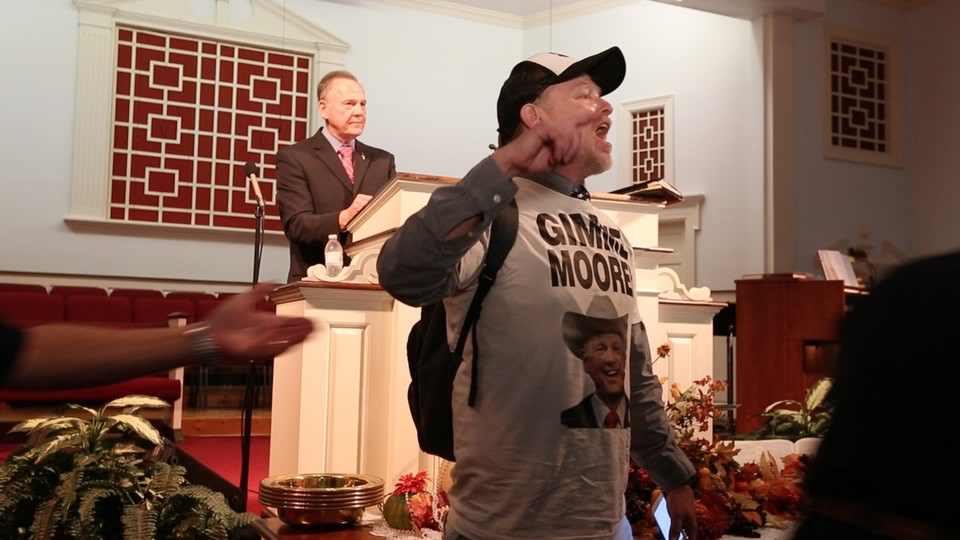 It is perhaps almost inevitable for Roy Moore to pop up in the weekly weird religious news. As the modern incarnation of rather extreme right-wing “Christian” values, he has garnered rather a lot of popular support from right-wing evangelicals despite the mounting and very believable evidence via multiple sources that he is rather fond of very young teenage girls. That’s fine if you happen to be a teenage boy, but in this instance that is not exactly the case.

There was as usual lots of other religious weirdness during the past seven days, but this week I’ve made it a Roy Moore special edition, and why not since he is so popular these days.

Additionally, the observation that the rather blatant hypocrisy by most of these right-wing evangelicals is jaw-dropingly astonishing, so how can I possibly resist.

Without any further ado, here are my top three items of Roy Moore religious weirdness that popped up in the last seven days.

So the story here is that Roy Moore got the Jimmy Kimmel treatment. As reported by al.com …

As Roy Moore’s seemingly surreal Alabama Senate campaign continues to trundle along unabated by allegations of sexual assault, it was perhaps unsurprising that a comedian and film crew from the Jimmy Kimmel Live! show would show up to poke fun at the twice-removed chief justice and his fervent supporters. 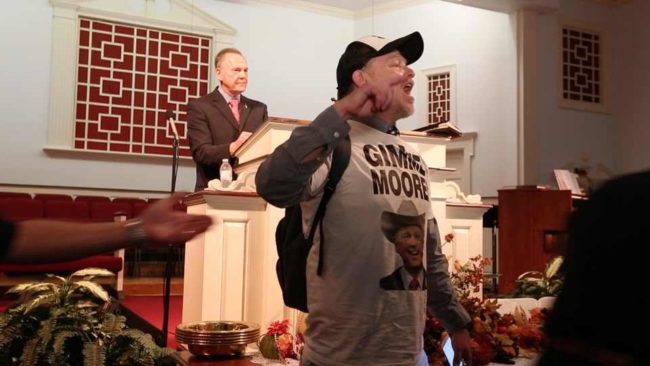 …Barbieri interrupted Moore’s speech inside the church. “That’s a man’s man,” he shouted while facing the 200 or so bemused people that turned up to hear Moore speak. “Does that look like the face of a molester?”

Barbieri didn’t stop there. After later shouting “I’m his biggest supporter. I’m his number one fan,” Barbieri was led away by law enforcement.

He continued: “They’re kicking out your number one fan, Judge. I’m your number one fan judge. Number one.  Because I believe in the Judge. And I don’t believe the ladies who are … does that look like the face of someone who hits on teenage girls?” said Barbieri of Moore, as he was led outside.

You really really don’t want to cross swords with Jimmy Kimmel on twitter, and to prove that point Jimmy came back with this zinger just 33 minutes later …

Sounds great Roy – let me know when you get some Christian values and I’ll be there!

As for mocking him face-to-face, that’s what the camera crew were doing.

Least you wonder, this exchange was not about belief vs non-belief, instead it is about a decent human being vs a rather obnoxious religious fanatic who refuses to be honest or act decently.

Jimmy Kimmel, who is also religious, explained it all like this … 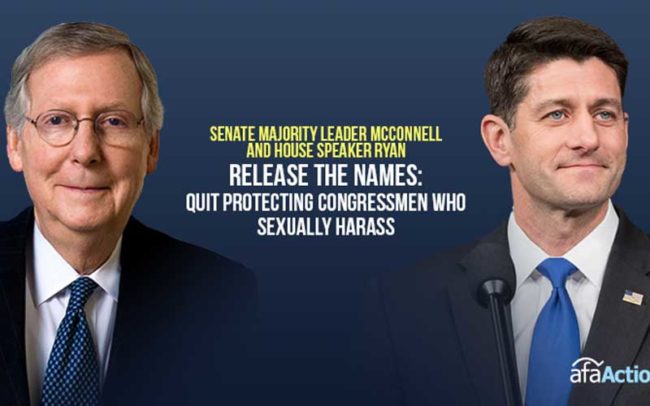 No, your eyes are not deceiving you, and yes, the American Family Association really are taking this stance. Via the Friendly Atheist we learn …

The American Family Association just issued a press release calling on Paul Ryan and Mitch McConnell to release the names of all Congress members who have been accused of sexual harassment and had to pay out taxpayer-funded settlements in their cases. (These are the funds that play a role in the scandal now involving Democratic Rep. John Conyers.)

Such transparency is a fine idea and well worth supporting … except in this case its turns out to be more that a tad bizarre.

Well because because the AFA very vocally and publicly support and endorse a sexual harasser.

AFA Action said on Facebook a few weeks ago that Moore is “a truthful man and a solid Christian.” … 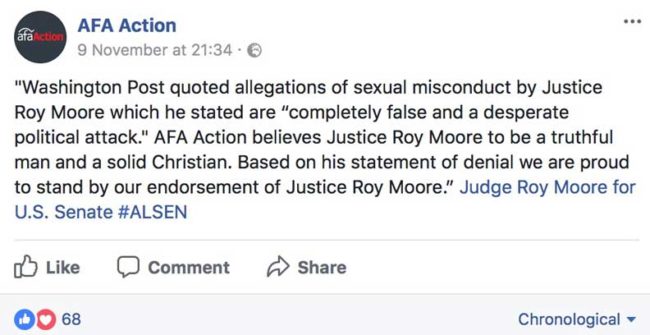 This is hypocrisy on steroids, it makes a complete mockery of anything and everything that they claim to stand for a complete joke.

Item 3 – The Federalist: It’s Justified To Vote For A Morally Questionable Politician

Just in case you can’t work out who they happen to be referring to, the article in question telegraphs that to you via a picture of Roy Moore as the in-your-face banner. D.C. McAllister writes to justify this stance as follows …

Will a serial liar deceive those who put him in office? Most likely.

That is indeed correct. He has, he did, and he continues to do so each and every day.

Will the porn-watching senator be influenced by his immorality to make bad foreign policy decisions? I don’t think so. Will a man’s sexual immorality influence his vote on abortion? Probably not. Call him a hypocrite, but I’d rather have a hypocrite who will stop the murder of millions of babies than a virginal man who leads countless to the slaughter.

Translation … the essence of the argument is that being a dishonest religious hypocrite is just fine, especially if he happens to be Republican. However, a non-religious secular leaning Democrat who just happens to believe that women have reproductive rights is evil incarnate. (Hint: Abortion is not murder, this is the usual religious rhetoric in play)

In other words, let’s just forget all about Roy Moore hitting on underage high-school girls. Since he is religious and Republican that’s all we need.

If you, regardless of your specific belief or lack of any belief, can spot the ever so slight complete are utter ethical failure here, then congratulations, you qualify as a decent human being.

To quote a well-known phrase … vote for Roy Moore and you will indeed reap what you sow.

If you are not familiar with the Roy Moore shenanigans, then you might be interested in a posting where I posted some additional background information on it all here a couple of weeks ago. At that point within that previous article I speculated that he would not stand down (so far that is true), and that he would also go on to win. That latter speculation may in fact not be correct, the polls are pointing to a very divided race.

If he does indeed fail to win then it can perhaps be argued that he has done a huge public service for the people of Alabama – he has motivated a deeply red state to flip blue and elect Doug Jones a very decent human being who truly does have their best interests at heart.