Each and every week I compose a random sampling of three news items that throw a spotlight upon some religiously inspired lunacy that has popped up during the past seven days.

The individuals highlighted are generally not bad people, but rather are people who have been ensnared and inspired by bad ideas that have tricked them into thinking their the idea is the high moral ground and that anything and everything else is not.

Back in April 1999, Steven Weinberg rather famously made the following observation about this while giving a talk at the Conference on Cosmic Design at the American Association for the Advancement of Science in Washington, D.C. …

When it comes to how we should deal with evil doers, the Bible, in the book of Romans, is very clear: God has endowed rulers full power to use whatever means necessary — including war — to stop evil. In the case of North Korea, God has given Trump authority to take out Kim Jong-Un. I’m heartened to see that our president — contrary to what we’ve seen with past administrations who have taken, at best, a sheepish stance toward dictators and oppressors — will not tolerate any threat against the American people. When President Trump draws a red line, he will not erase it, move it, or back away from it. Thank God for a President who is serious about protecting our country.”

… er yes, so here is how this pans out. If you find that you have a belief that condemns a loving couple being together (a gay marriage), but at the same time happily endorse the idea of vast swathes of a population being incinerated in a Nuclear holocaust, then you really really do need to hit pause and consider if the god you actually believe in is actually evil incarnate and Satan himself without you actually knowing it.

Personally I do think that Trump should indeed go to war with North Korea … I don’t mean the military, just Trump personally with no involvement from anybody else.

(Hat tip to Ron Perlman for that last quip) 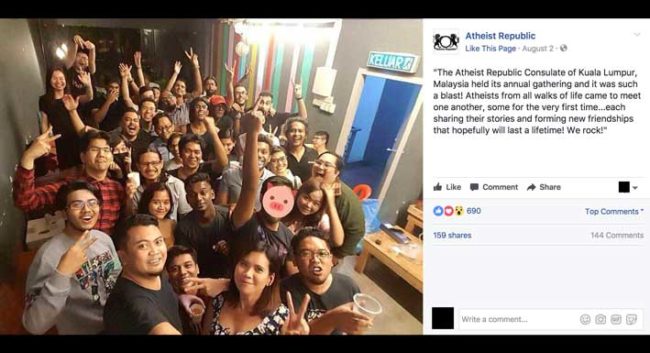 A Malaysian Minister in the Prime Minister’s Department, Shahidan Kassim, wants the government to ‘hunt down’ atheists in Malaysia.

According to him, Malaysia is a country of faith and has no place for non-believers.

Why would he say this?

The context here is that a group of people who simply don’t believe got together and posted the above picture in a Facebook group. The very fact that there are people who just aren’t superstitious totally outraged him and so his response is to seriously suggest that they needed to “hunt them down”.

The government will investigate if there are Muslims who have joined the Kuala Lumpur Atheist Club, as made viral on the social media recently, said Deputy Minister in the Prime Minister’s Department Datuk Dr Asyraf Wajdi Dusuki.

“If it is proven that there are Muslims involved in atheist activities that could affect their faith, the state Islamic religious departments or Jawi could take action. I have asked for Jawi to look into this grave allegation,” he told reporters after officiating the Indera Mahkota Division Umno Youth Delegates’ Conference here today.

It is not just him. Ali A. Rizvi posted on Facebook a collection of screenshots of Malysian Muslims demanding that they should be put to death

Anti-Muslim bigotry is real, however bigotry does not respect religious boundaries and so within strands of Islam belief there is a considerable degree of hatred and bigotry simmering away as well. That is directed towards anybody who dares to stop believing.

Hemant Mehta has a posting up that has a lot more detail.

The root to this and much else is a deeply felt insecurity towards people who do not conform. In the west a target can be people who hold a different belief such as Islam or no belief, or happen to have a different sexual orientation. We are perhaps beginning to learn how to be more tolerant, but we do have a long way to go. It is however not just the west that has a great deal to learn. Our entire species has come a long way, and so we all still have a long way to go.

Within the Islamic world insecurity prevails and so those that stop believing and become ex-muslim quite literally fear for their very lives.

None of this should be tolerated – we should never tolerate intolerance no matter who the target is or who the source is. Criticism of bad ideas that inspires such intolerance is not intolerance itself, and is distinctly different than an intolerance of people who simply have a different believe or no belief.

Think of it this way – Religious beliefs do not have rights, only people do, and those basic human rights should prevail and trump any and every religious idea.

Item 3 – Ken Ham: Atheists Shouldn’t Use Words Like “Bad” If They Don’t Believe in God

Sigh! … Yes the Ark man is back again this week. Ken Ham is the guy who conned a lot of people into giving him $100 million to build a life-sized replica of Noah’s Ark.

He has popped up this week with yet another daft claim.

About half way in to a TV Broadcast conducted by his creationist organisation, we get this …

HAM: For all the young people watching or listening, remember something: Whenever you’re talking to a secularist as a Christian, you’re talking to an atheist, they will use words like “good” and “bad” and “right” and “wrong” and “rights”… they will use those sorts of words, and you just need to challenge them every time. How do you know? Where do you get that from? Who decides?…

HODGE: Well, the title up here: “Bill Nye is bad for children.” You know, even that kind of terminology, good and bad, that is Christian terminology. They’re borrowing…

HAM: He’s an atheist who’s saying that Ken Ham says Bill Nye is bad for children. Well, how can an atheist even say “bad”?

PURDOM: Why does an atheist care?

It is a common religious claim that without a God to tell you that something is good or bad you have no way of working out what is good or bad.

OK, let’s test this with a simple rather obviously true statement – “Slavery is bad”.

I would hope and also anticipate that you would agree with most people that this is correct, and would harbour no doubts.

Now ask yourself why you hold that view?

The rather surprising things here is that if you dig into either the Quran or the Bible you will find that both are pro-slavery texts from cover to cover. In fact the bible contains explicit instructions on whom you many enslave and also how to correctly beat your slave. This is perhaps the cue for the “Ah but in the New Testament we …” reply. Nope, just stop there, sorry, the NT is also pro-slavery … “Slaves obey your masters” is the directive in the NT is several places (For example here and also here, and in other places such as 1 Peter 2:18–20 for example.)

So if it is not in the bible, and it is not a religiously inspired idea that slavey is bad, then how exactly did you come to that conclusion?

If indeed Mr Ham is so sure that he knows exactly what God wants, then why is he unable to get his fellow Christians to agree on what God says. For example, he asserts that the entire universe is only 6,000 years old but the vast majority of Christians do not agree. So if he can’t demonstrated consensus on such a basic fact, then how can he possibly work out what God’s rules are and what is good or bad if there is no agreement at all.

In contrast, if you put aside dogma and instead deploy reason and empathy, then you will reach a far superior morality, one where you can happily discard religious texts and reach good conclusions – for example, that slavery is indeed immoral and should not be endorsed. I would anticipate that Mr Ham would agree, but I don’t think he can point to any text in the bible that specifically advises that slavery is bad, so he really does not have any basis at all for such a conclusion.

Will next week be different, and will I struggle to find examples of religious weirdness?