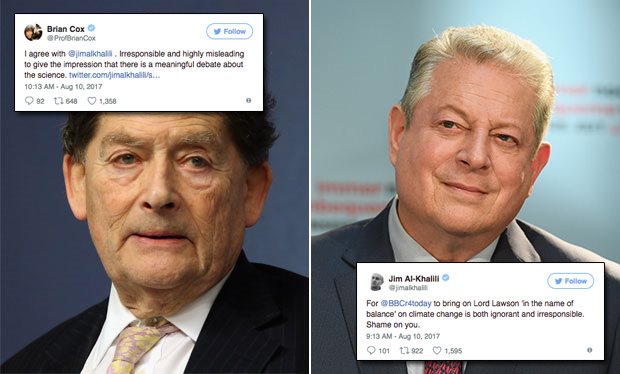 Nigel Lawson (now Lord Lawson) is well-known for having been part of Margret Thatcher’s Conservative government in the 1980s where he held the position of Chancellor of the Exchequer for six years. If discussing politics or perhaps economics, then he does indeed have a considerable depth of experience to leverage and will be listened to by many. Unfortunately, as is often the case, people who are recognised as subject matter experts within one field are at times prone to also wading into other arenas where they hold no expertise at all.

Al Gore is in the UK promoting the sequel to “An Inconvenient Truth”. The new movie is “An Inconvenient Sequel: Truth To Power”. (A little more on this further down, including the official trailer). He was interviewed about this by BBC’s Radio 4 flagship program “Today”, a slot that literally millions tune into over breakfast or while commuting to catchup on the latest news.

The interview was on 10th August (last Thursday) …

Former US Vice President Al Gore has said the US will “meet the commitments” set out by the Paris climate agreement, despite President Trump’s withdrawal from the accord.

“I think [the reductions] will still come,” he said, citing the “sharp drop” in the cost of green energy.

Mr Gore said of President Trump’s decision to pull out of the Paris deal: “Not only his daughter, but several others close to him were in favour of staying in the Paris agreement.”

To ensure “balance”, the BBC also invited Lord Lawson on as well.

(If you know what is coming, and know what his stance is, then about here will be the right place for you to face palm)

He is not only well-known to the older generation who remember the 80s, but also now maintains a vocal climate-denial stance. Lawson proceeded to declare that Climate Change was all BS …

“I’ve heard what Al Gore has to say and it’s the same old clap trap. People often fail to change and he says he hasn’t changed, he’s like the man who goes around saying ‘the end of the world is nigh’ with a big placard.

This “same old clap trap” is the prevailing scientific consensus and is backed up by rather a lot of very robust evidence. Is he seriously suggesting that the entire scientific community are a bunch of incompetent buffoons on par with some nutter yelling at random strangers in the street?

For example, he said that, er, there had been a growing increase, which had been continuing, in the extreme weather events. There hasn’t been. All the experts say there haven’t been. The IPCC, the Intergovernmental Panel on Climate Change, which is sort of the voice of the consensus, concedes that there has been no increase in extreme weather events.

“All the experts” … seriously, he really said it. That is simply not true unless of course you redefine the word “expert”. If he modified that to read “Most of the experts” or even “Some of the experts”, it would still be grade 1 gold plated BS. In its latest assessment report (pdf) (AR5), published in 2013, the IPCC’s Working Group I (WG1) on the physical science of climate change makes clear that many types of weather extreme have increased in frequency since 1950.

as I’ve said, the IPCC, has confirmed that there has been no increase in extreme weather events. And as for the temperature itself, it is striking, he made his previous film 10 years ago, and according – again – to the official figures, during this past 10 years, if anything, mean global temperature, average world temperature, has slightly declined.

Exactly whose “official” figures does he cite?

Seriously no … once again this is pure fantasy and contradicts the actual factual measurements.

Lord Lawson argued on BBC that global temperatures have declined over past 10 years. Opposite is true, if anything warmed slightly faster. pic.twitter.com/k3nZumqYTH

I did mention that economics is his subject area, and yet even here he gets it wrong …

if it is for the economics, why on earth do we subsidise it and support it via all sorts of government policies, which are driving up the costs of energy, particularly in the United Kingdom.

Once again, this is not how things are in our reality …

As well as Lord Lawson's dodgy climate science on @BBCr4today, his claim we have some of the highest energy costs is also worth a check: pic.twitter.com/DBlXvNLIG3

Lawson is indeed demonstrating a rather consistent and persistent ability to promote climate change denial claims that have no factual basis. He has been banging this drum for some time now, and each and every time he does this, the facts are pointed out to him … with evidence. He in turn has never been able to backup any of his claims … ever …. and yet keeps repeating the same claims.

I can only wonder how this this new variation “balance” at the BBC will play out. If indeed the pattern is to be maintained then we should perhaps now anticipate the following …

I do truly get the concept of balance in the media. It is important to strive to present the full conversation. However in this case their “balance” consists of reaching out to an eccentric retired 85 year old who expresses opinions that are not science based. The conversation regarding the reality of climate change happened quite some time ago and is over. The prevailing consensus is quite definitive and backed up by an ever increasing mountain of evidence, so the real debate revolves around what we will now do about it.

Interviewing a 1980s politician to replay a 1980s debate that was concluded long ago is not “balance”, but is instead inappropriately granting a platform to a fringe anti-science belief.

I’m not alone in this thought, many many others agree …

For @BBCr4today to bring on Lord Lawson 'in the name of balance' on climate change is both ignorant and irresponsible. Shame on you.

I agree with @jimalkhalili . Irresponsible and highly misleading to give the impression that there is a meaningful debate about the science. https://t.co/HtqJf9sBFW

Lord Lawson, talking through his hat on #climatechange again. Why #r4today? https://t.co/x0etynRSrZ

I was initially tempted to wade in and proceed to pull his claims apart in a lot more detail, but CarbonBrief has done an excellent job. If you are curious to understand exactly why more or less everything he claimed is nonsense and would like to dig into what the facts actually are, then I can highly recommend checking out that full article.

I also note with amusement that Paul Matthews, a chap deeply involved with Lawson’s GWPF Climate Change denial think tank (a tiny fringe group with about 100 members),  jumped into the comments there to defend Lawson and ends up deeply embarrassing himself.

An Inconvenient Sequel: Truth To Power

I did also promise a bit on this.

You can find the official tumbler page for it here.

… and here is the official trailer for it that has been viewed 2.4 million times)