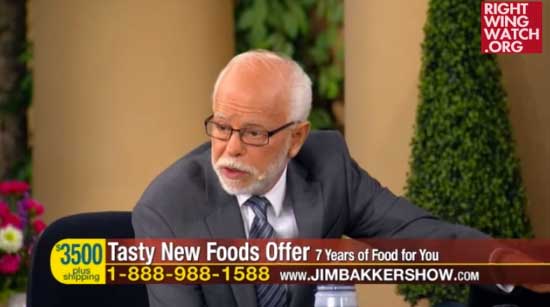 Since I create this top 3 list each and every week you might perhaps wonder if I ever struggle to actually find three bits of religious weirdness for the past week.

In short … er no, just no, I’m simply spoiled for choice. As an example, apart from the three I’ve opted for this week, I could also potentially have gone with these three …

… or perhaps these three …

Remember … this is all stuff that is from the last 7 days.

Let’s try a small experiment to illustrate the point. I’ll take just one regular nut and select three examples of weirdness that relate to just him from the past seven days. The point is that the regulars who often pop up each week don’t have a weirdness diet that restricts them to just one bizarre statement each week. Instead they positively binge on it all the time.

I’ve opted for well-known con man Jim Bakker, the guy who went to jail for religious fraud, and is now back in the game of using religion to con people out of cash.

If you think that perhaps a guy who says weird stuff on a regular basis could not come out with even weirder stuff …. well … you would be wrong.

On Monday, televangelist Jim Bakker spoke with Jennifer LeClaire of Charisma News about angels and angelic intervention in human affairs, in particular the need to combat demonic principalities.

Bakker said that he and other public religious figure, like Pat Robertson, are the brunt of spiritual attacks. The two televangelists worked together on “The 700 Club,” which Bakker once hosted on Robertson’s Christian Broadcasting Network and which is now hosted by Robertson. Bakker expressed dismay that some people make fun of Robertson simply for the fact that he has the power to pray hurricanes away.

“Pat sees things,” he said. “He sees in the spirit and he prophesies and they don’t like it. He’s told hurricanes to go back out to sea and they turn around and go out. The press makes fun. That’s what they do to try to destroy.”

“The press makes fun” … gosh, I just can’t imagine why.

Least you wonder, Mr Robertson actually did indeed make a claim that he could control hurricanes back in 2005

Would Mr Bakker be crass enough to in essence take a verbal shit all over the victims of a terrorist atrocity?

Indeed yes, that’s not a problem for him at all …

After accusing young people of lacking manners and being impolite to President Trump and Vice President Pence, Bakker turned to the victims of the Manchester bombing, several of whom were children. The victims, he claimed, “almost cursed themselves”:

What was the name of that concert? ‘Dangerous Woman concert.’ If we could tell you what we know—and we don’t have time today—but we’re going to talk about some of those things, they literally invited these kinds of things to happen. They almost cursed themselves with this concert. I tell you what, God’s not going to put up with mockery. ‘Be not deceived, God is not mocked.’

22 people were killed during the attack, and dozens more were injured.

Using innocent dead children as a soapbox to promote an absurd religious claim is quite frankly truly repugnant.

Mr Bakker’s con is to essentially manipulate gullible people into spending an extensive amount of money buying the crap that he sells. One of his big things is to instil a fear that we are in the end times and so as preparation for the collapse of society you should spend thousands buying his food buckets.

Roughly about two years ago a news team at NPR bought this stuff, gave it a go and concluded that it was the most awful stuff ever, and akin to eating radioactive wet cement.

This past week BuzzFeed gave it a go …

One person seamed to like it, but the others all reached a rather different conclusion.

The one thing I don’t get is why nobody thinks, “Hey wait a second, we don’t need to buy this stuff, if the apocalypse happens, then we are all going to be raptured anyway.”