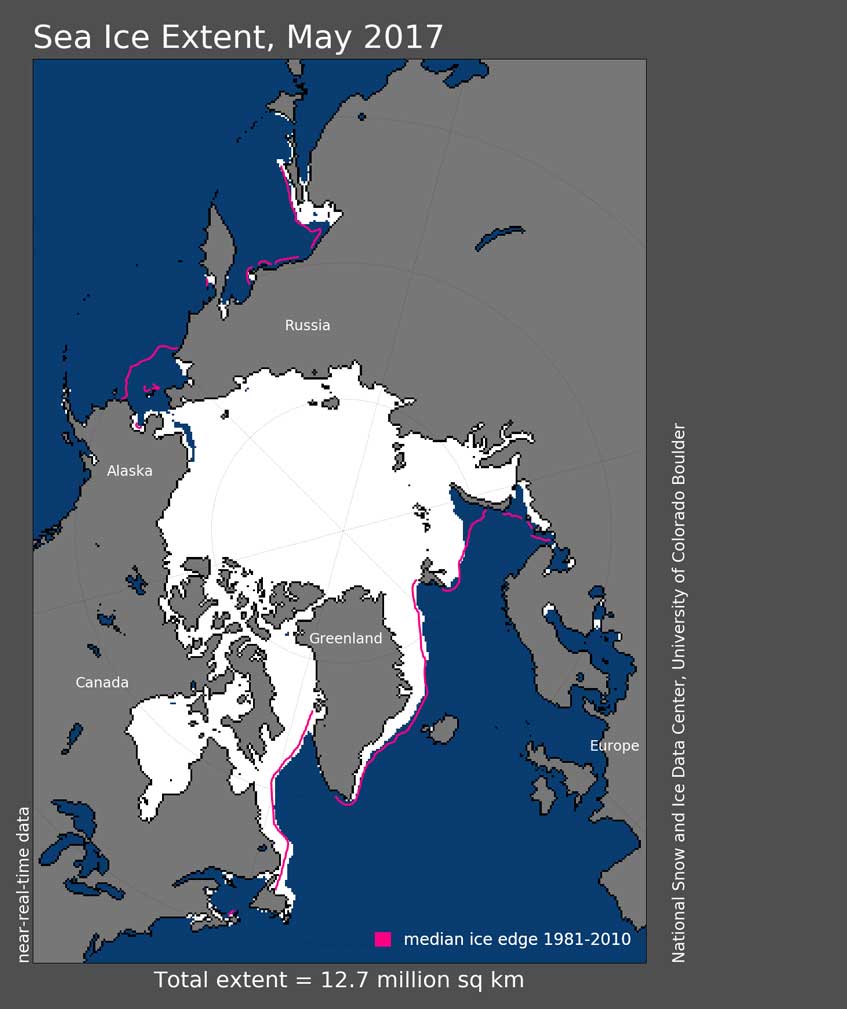 On a regular basis the National Snow and Ice Data Centre (NSIDC) issue a monthly update regarding any and all observations and data gathered during the previous month. Their update for May 2017 has now been issued, so what does it tell us?

It has been an average month, except for the Chukchi Sea area where something dramatic has happened …

After setting satellite-era record lows during winter, Arctic sea ice extent declined at a steady but somewhat sluggish pace during May. However, ice has retreated at a record rate in the Chukchi Sea, and open water extended to Barrow, Alaska. In the Southern Hemisphere, ice extent continues its seasonal expansion, but extent remains well below the long-term average for this time of year. 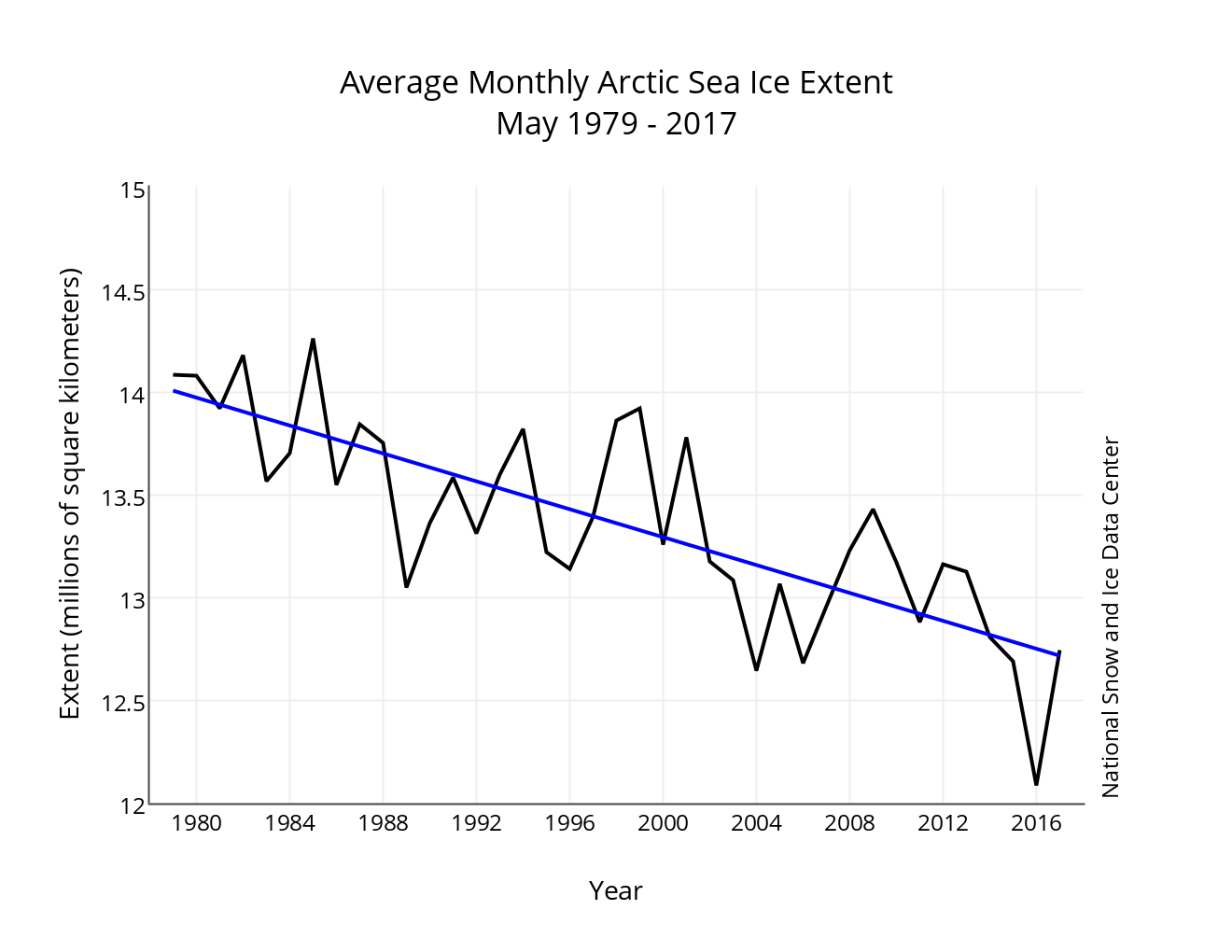 May was quite literally just average, and saw neither an excessive gain or loss. It is however right on the line of the on-going downward trend. Within the above chart you can see the recorded sea ice extent for every May going back to 1979 and that illustrates where May 2017 fits into that ongoing trend – the decline of 2.5 percent per decade continues …

Sea ice was especially slow to retreat in the Atlantic sector of the Arctic, with little change in the ice edge in Baffin Bay and Davis Strait. The ice edge expanded in the Barents and Greenland Seas until the end of May, when the ice finally started to retreat. Most of the ice retreat in May occurred within the Pacific sector, particularly within the Sea of Okhotsk, and the Bering and Chukchi Seas.

Here is what has happened … 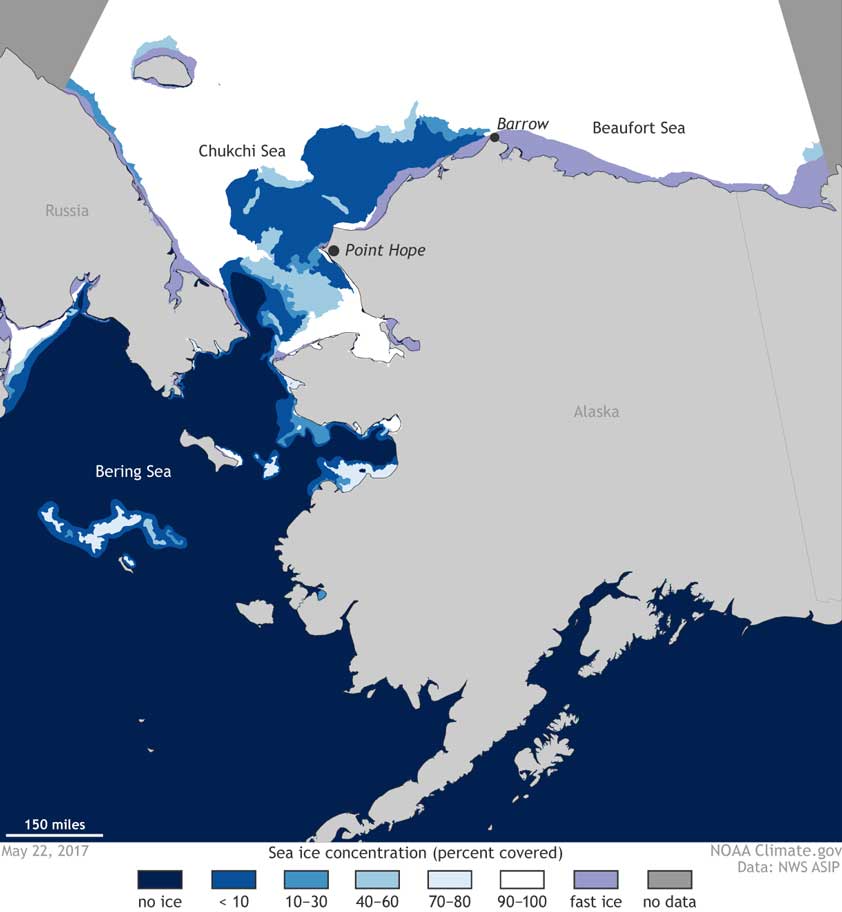 In this region the sea ice extent has rapidly retreated to a degree that has never before been observed.

Here is the NSIDC analysis of this …

By the third week in May, open water extended all the way to Barrow, Alaska (Figure 4a). Figure 4b shows daily ice extent for May from 2012 onward in the Chuckchi Sea. The rapid retreat in 2017 stands out. A recent report by the National Oceanographic Atmospheric Administration (NOAA) indicates that the amount of open water north of 68o N at this time of year is unprecedented.

Part of the explanation for earlier open water formation in the Chukchi Sea is the unusually high air temperatures in that region during the previous winter. It is instructive to look at the cumulative temperature departure from average for Barrow, Alaska (Figure 4c). From 1921 until about 1989, conditions at Barrow actually got progressively cooler. However, since that time, temperatures have markedly increased.

Consistent with warm conditions, extensive open water in the Chukchi Sea region persisted into December; the delayed ice growth potentially led to thinner ice than usual in spring. In addition, strong winds from the north occurred for a few days at the end of March and early April, pushing ice southward in the Bering Sea, breaking up the ice in the Chukchi Sea, and even flushing some ice out through the Bering Strait. At the same time further east near Barrow, winds helped to push ice away from the coast. Based on recent work by NSIDC and the University of Washington, the pattern of spring sea ice retreat also suggests a role of strong oceanic heat inflow to the Chukchi Sea via Bering Strait.

The ARCUS Sea Ice for Walrus Outlook (SIWO) provides weekly reports from April to June on sea ice conditions in the northern Bering Sea and southern Chukchi Sea regions of Alaska to support subsistence hunters and coastal communities. While the reports are not intended for operational planning or navigation, they provide detailed ice and weather observations for the region, some made by local community members, others from operational forecast centers. The most recent update on June 2nd discusses the continued rapid deterioration of sea ice between Wales and Shishmaref, Alaska. Nearly ice-free conditions around Nome, Alaska reflect warmer waters from the Bering Sea moving into the region. Some sea ice remains attached to the shore along the northeast coast of St. Lawrence Island, but the Bering Sea is essentially ice free. Prime walrus hunting for these communities is typically in May. However, when the ice retreats early, the walrus go with it, reducing the number of walrus the local communities can hunt.

Climate Change is not something that will impact communities in the future, real impacts are being felt right now.