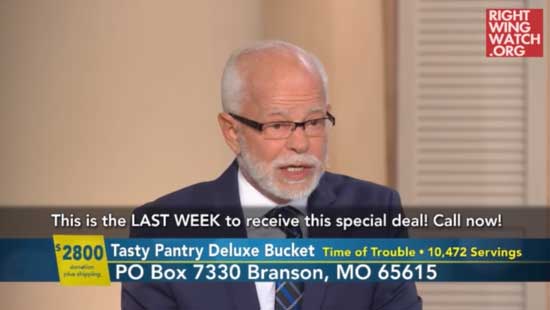 Some believe things that will quite naturally lead them to accept absurd conclusions. For others, literalist interpretations is a road that takes them into the embrace of some truly obnoxious ideas. Entrenched between both of those we also have conmen who utilise religion to enrich themselves.

For my weekly pick of the top three weirdest bits of religious news we have examples of all three. I’ll leave it as an exercise for you to work out which boxes the following items tick.

Climate Change has of course been the focus during the past week due to Trump fulfilling the role of Idiot-In-Chief and declaring that the US will withdraw from the Paris Agreement. If indeed cutting back in CO2 emissions is supposedly not the answer, then what is?

We have a right-wing Republican who advised a packed town hall meeting on what his Climate Change solution is. Apparently it is  God.

Michigan Rep. Tim Walberg said during a town hall in Coldwater, Mich., on Friday that while he believes climate change is real, it is not something for humans to solve.

He continued: “Why do I believe that? Well, as a Christian, I believe that there is a creator in God who is much bigger than us. And I’m confident that, if there’s a real problem, he can take care of it.”

So there you go then. The GOP Climate Change solution is …. magic.

Item 2 – Jim Bakker: If Trump is Impeached, Christians Will Fight in the Ensuing Civil War

Yes he is back and eager to sell you a bucket of slop for $2800, but first he needs to put a bit of fear into you to ensure you are sufficiently motivated to impoverish yourself so that he can get his hands on your cash.

This week’s bit of fear for the gullible from this con man is the idea that getting rid of Trump will lead to a civil war.

While criticizing calls to impeach Trump, Bakker said that such a move would lead to war: “If it happens, there will be a civil war in the United States of America. The Christians will finally come out of the shadows because we are going to be shut up permanently if we’re not careful.”

If indeed Trump was impeached then the next in line is even worse, it is Mike Pence.

I’m not exactly seeing a Christian uprising on the streets if Mr Pence moves into the White House. It will far more probably be a reaction that involves the Christian right dancing with joy in the streets.

Item 3 – Pastor Keith Gomez: Without Slavery, Black People Would “Still Be in Africa With a Bone in Their Nose”

The bible is a pro-slavery text from cover to cover. The Old Testament has explicit instructions on whom you may enslave, and also how to correctly beat your slave (It is OK as long as the slave survives the beating). In the New Testament it is no better, slaves are directed to obey their masters. (Here, and here, and here, etc…)

So what do you do if you literally believe the bible and are pastor of an “independent, fundamental, KJV Bible-believing & preaching Baptist church”?

You take a stance where you attempt to justify slavery as a good thing within your sermons ..

… we’re talking about 13 books in the Bible, Romans through Philemon. You ought to write that down. I could really shake you up now, but I don’t know if I oughta wake you up that bad… when you get in the Pauline — are y’all listening to me? — when you get into the Pauline epistles, you’re getting in the doctrine. So why would you get in Philemon when he’s trying to teach you how to treat your slave?… If they should be slaves.

[Makes a fake snoring sound] So you wanna go to sleep?

See, what you wanna do is turn in to TBN [Trinity Broadcasting Network] and listen to them odd birds who don’t know doctrine whatsoever. And then you hate slavery because we were taught to hate that. Because we’re so nasty.

And some of you little whities can’t get it either. If it wasn’t for slavery, those folks would still be in Africa with a bone in their nose fighting lions, and if you don’t like that, you can lump it any way you want. That ain’t a prejudice. That is factual and historical.

So here we are in the Pauline epistles and the man is teaching us how to deal with our slaves. And I don’t know if you know this or not, I’ve been there four times. I don’t know how many times you’ve been to Africa, but I’ve been there four times. And there are slaves in Africa. All over. African… with African slaves. And around the country, around the third world country, there’s more slaves that what you’d ever want to believe.

[Responding to congregation] No, not in America, because we’re civilized and we’re advanced. But I’m asking you a question that you cannot answer. Why is he telling us how to deal and be fair to a slave in a Pauline church epistle? You can’t, can you?

Okay, let’s move on. I told you I was gonna wake you up. Look at that, man. Got your attention. But it’s true!

Hat Tip to Hemant Mehta for this one. He also reached out and fact-checked that this was what he actually said. It was.

If indeed your conclusion is that slavery is just fine and you attempt to justify it, then you seriously do need to pause and rethink how you actually work out what is and is not moral. Hint: “The Bible says so” is what got him into this mess in the first place.